Sir Isaac Vivian Alexander Richards would love to be India’s batting coach and teach the players how to face the short ball, and more importantly, summon courage. 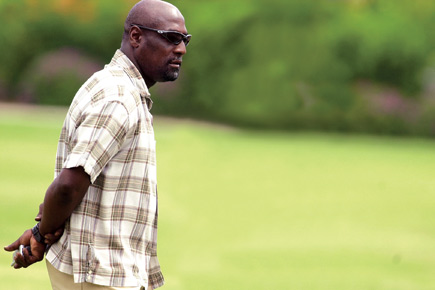 
At an ideal setting at the beautiful Apes Hill golf course at St James, the newest in scenic Barbados, Sir Isaac Vivian Alexander Richards looked all in charge while leading what is now a very relevant social awareness campaign against drunk driving in the West Indies. While promoting the Johnnie Walker Campaign, the greatest T20 batsman not to have played this version of the game took time out to have an exclusive conversation with Open. Here are excerpts of that conversation.

Q Sir Viv, watching cricket in the Caribbean is a fundamentally different experience. However, what isn’t very satisfactory is the West Indian performance. How do you look at how West Indies fared in the World Cup and where does West Indies cricket go from here?

A It was disappointing to see the West Indies play the way they did. There was just one good innings in the entire competition: the match-winning 98 by Chris Gayle against India. The self-belief to win was lacking in the team. The way Australia beat Pakistan in the semi-final, in what to me was the match of the competition, best attests to how cricket should be played. Winning as you know is a habit, and the Australians have proved why. In that match against Pakistan, they demonstrated how a match should be won. The desire to win the match was far more than any challenge Pakistan could pose for them. There are many giants in that Australian team, and that’s what the West Indies is lacking. Also, I’d say that Gayle would have been happier had he scored that 98 against Australia rather than against India!

Q Coming to the Indian campaign, we are all very intrigued that despite having a really good side on paper, India crashed out at the super eight stage of the tournament…

A At the root of India’s failure was the inability to play the short ball. Tracks in India do not necessarily offer the same steep bounce like the pitch at the Kensington Oval in Barabados. And unless you have the courage and the skill to negotiate the short ball, you will inevitably flounder against aggressive bowling. Unless the Indian batsmen are able to develop a technique to counter the short stuff, India will have a problem in conditions that suit swing and bounce. In fact, most of the teams will now dish out the short stuff against Indian batsmen whenever India plays away from home because it is an open secret that the Indians are susceptible to this style of bowling. Courage, I’d say, is the key. Am hopeful that the Indians will be able to remedy this deficiency and move on in the coming months, given the talent they have.

Q You mentioned the word ‘courage’. There is lot of talk back home in India about whether all the courage, determination and the zeal to win has been sucked up by the IPL. After all, we came into the competition just five days after the IPL concluded. Will you hold the IPL responsible for this?

A India came into this competition as the team that had played the maximum number of T20 games, thanks to tournaments like the IPL. Most of the Indian players had played more than 40 T20 games when players from other teams hadn’t played more than 20 games each. It was expected that such experience would benefit the Indians. But it became apparent when India played in Barbados that the real deficiency was against hostile fast bowling, something that has been ailing Indian cricket for a sizeable period of time, and something that the experience of playing IPL could hardly substantively change. So it would be unfair to blame the IPL for India’s defeat in the competition. Rather, tournaments such as these benefit players by preparing them for the big stage. By allowing youngsters to share the dressing room with legends of the game, the IPL helps in grooming them mentally and creates a situation where they have been exposed to varied conditions and challenges before they enter the international circuit.

Q Would you be interested in trying to help out Indian cricket in any professional capacity?

A For sure! I’d love to be a batting consultant who helps players with their inability against short-pitched bowling. And if it is about facing the short ball then I could surely teach them a lesson or two. Also, the aggression that we have been talking about is something I can instill in them. They need to summon the courage and believe in their ability against the short ball, and I do know a thing or two about how to achieve this.

Q So are you available?

A Yes. Maybe you will see me involved in some capacity in some other part of the world if I am given the opportunity to share my experiences and vision.

Q Coming to your experiences of playing against India, how would you rate some of the players you have played against?

A Someone who gave your cricket self-belief and taught India how to win on the big stage was Kapil Dev. He led from the front, was full of talent and aggression, and won India the 1983 World Cup competition that transformed the game in your country. Kapil for me will always remain a very special player. Among the current crop of cricketers, I greatly admire Sachin Tendulkar and Mahendra Singh Dhoni. Sachin has been the perfect role model for the world game and has performed in all conditions. What is noteworthy is his discipline. This is something our players in the West Indies need to emulate. I also have the greatest admiration for Dhoni. He almost single handedly led a young Indian side to victory in the first T20 World Cup and followed it with tremendous performances against Australia, both at home and Down Under. He has successfully led India to the No 1 position in Test rankings. It will be unfair to judge him based on the performance in the recent World T20.

Q Do you think that the current crop of cricketers lack a sense of pride when representing their national team? You are on record saying that wearing the maroon cap mattered to you more than anything else.

A I’m intrigued at how some cricketers across the world can even think of compromising on national duty in favour of more lucrative options. Unless you take pride in the cap that you wear and feel that you are entrusted with the task of protecting the sanctity of that cap, you can never aspire to be a legend. We need to make this change happen in the West Indies… Players should believe that national duty is paramount and major performances for the West Indies will automatically open doors in other parts of the world in all sorts of lucrative competitions. The essence is that all of us cricketers are who we are because we have scored runs or taken wickets for our respective national teams. Unless we respect the national cause, people will hardly ever give us the respect we command. Nationalism and national pride is the essence of sport.

A We certainly can. But for that we have to do the things I have been telling you about. We need self-belief, self-restraint, pride in playing for the team, and finally talent meshed with determination and discipline.