It was unthinkable. That a day would come when the urban Indian male would admit he is bored of cricket. But the truth is that the sport is fast losing its charm among its most commercially influential devouts 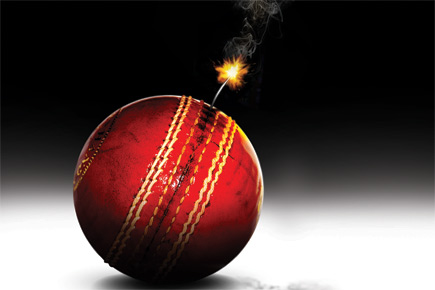 It was unthinkable. That a day would come when the urban Indian male would admit he is bored of cricket.


A relevant commercial is being aired these days. It is for Reliance Big TV and features a young man hoping to see Manchester United cross swords with Chelsea. But when he turns on the TV, the channel is showing a crick­et match involving Bangladesh. He feels as you would when a DVD promising adult content turns out to be a documentary on the giraffe. The commercial ends with the young man vouching for the DTH service in question, as it would enable viewers to watch programmes of their choice.

The advertisement captures the subtle change in the sporting appetite of the urban Indian who uses the word ‘man’ a lot, like the guy in the ad, and the expression ‘football game’ instead of ‘foot­ball match’. This breed of Indian sports lovers no longer wants to watch just cricket. In fact, when the cricket is excessive, he is bored of it. Yes. Some Indians are bored of cricket.

“My own friends have gotten weary of it,” says Professor Ratnakar Shetty, the Chief Administrative Officer of the Indian cricket board. “I believe the number of bilateral fixtures is still reasonable. But the Indian Premier League (IPL) and some International Cricket Council (ICC) events, like the World Twenty20, make the calendar crowded. This year, the fatigue seems greater because of the Champions Trophy and the Champions League taking place one after another,” he adds.

Sambit Bal, the editor of the popular website Cricinfo, has not gone off cricket yet, but he is worried about it. “Cricket needs reason and context. The Ashes is big because it has context. But much of the cricket today is meaningless. One series leads into another. The anticipation has gone out of it.”

He himself has reached a point where he rations  his cricket-watching. “I was going to cover the Champions Trophy and wanted to be fresh for it. So I did not watch the England-Australia one-dayers that preceded it. I only watched the final of the tri-series in Sri Lanka (featuring India, Sri Lanka and New Zealand).”

There are some who are put off by the innovations in cricket. Manoj Bebarta is a 26-year-old working in Delhi. He was 13 when Mohammad Azharuddin’s decision to field first cost India a match against Australia in the 1996 World Cup. Manoj, then a student in Cuttack, obsessed over Azhar’s move. He did not eat. He did not do his science and maths homework. The teachers hit him.

Now Manoj does not care if India bowl or bat, win or lose. Not as much.

“There is too much cricket, too many innovations,” he says. “I don’t understand Duckworth-Lewis or Powerplays. They lowered my interest. Football, Olympic sports and tennis seem fresher. I’m interested in football after India’s win in the Nehru Cup.”

There is not an age group that is not disenchanted with the game. Only the reasons are different. When 61-year-old Makarand Waingankar, the cricket writer and talent scout, was a child, cricket was a traditional game. Tests were the gold standard. The dice was not loaded against the bowlers. The batsmen were not covered in Z-category protective gear. Wickets were fertile. That is the cricket he craves. But it has disappeared. Thankfully, there is technology. He says, “I still enjoy Test cricket. On other days, I shut myself in my room at night and watch DVDs of old matches…Frank Tyson versus Neil Harvey, Colin Cowdrey and Len Hutton vs Ray Lindwall and Keith Miller. These were real contests between bat and ball.”

What has led cricket to this point, where some influential fans—like the urban sophisticate and the purist—are feeling a sense of ennui? Where even Ratnakar Shetty, a dyed-in-the-wool cricket man, has begun to enjoy Formula One?

The primary reason is that cricket has become repetitive. At all times, there is cricket on television and in the media. Not all of it is live or of consequence.

“Though I still watch encounters that promise to be interesting, I just don’t have the appetite for all the cricket around me,” says Amit Varma, a popular blogger and now a novelist who at one time earned his livelihood from cricket writing.

More matches mean more money for the Board. Even in a year ravaged by recession and the shift of the IPL to South Africa, the Board earned a surplus of Rs 54 crore (‘Surplus’ is a term that the Board, which regards itself as a non-profit organisation, uses to refer to profits after all expenses and disbursements).

This is not a bad thing. The board’s wealth enables it to give Rs 50 crore to the National Sports Development Fund and approve a grant of Rs 25 crore to the All India Football Federation. The board is able to pay retired players and umpires a pension ranging from Rs 10,000 per month to Rs 35,000, depending on the level of cricket the retirees had played. Recently, when I ran into a relative of Ashok Mankad, he said,

“The pension from the Board helped my brother-in-law spend his retirement days in peace, playing golf.”

The board knows that the wealth of Indian cricket is a consequence of this nation’s complex love for the sport and that anything which affects this love would have financial repercussions. Ratnakar Shetty says, “We agree there should be a reduction of matches, we do talk about it in meetings. The parent body (ICC) too should realise that events lose importance if held frequently. The World T20, for example, was held this June. Next April, it will be held again. It is too soon. There should be a four-year cycle for ICC events so that we have one of the two World Cups (50 over or 20 over) every two years.”

Asked if that would happen, Shetty says, “I hope so.”

There is another reason why the Indian love for cricket is losing its ferocity. We are now successful in several aspects of life. In the years before globalisation, sports was a source of nationalism for Indians, and cricket and hockey were the only team games that were gratifying. This reached fever pitch with the cricket team’s 1983 World Cup victory. It was a time when not many Indians achieved recognition at the international level. The cricket team represented our aspirations. If they did well, we felt proud. When they did not, our heads hung. That has changed now. Indians derive self worth from many other walks of life, including business and space research.

What must worry cricket handlers the most, however, is that the age group most coveted by marketers, the urban youth with upper middleclass backgrounds, is more interested in football. The sport was always popular in India. But in the old days, the telecast of international matches was sporadic. Football fever peaked every four years with the World Cup and dissipated once Dino Zoff or Diego Maradona or Lothar Matthaus had hoisted the trophy.

From the mid-90s, however, Indians could enjoy comprehensive coverage of European leagues, all thanks to cable television. The impact has been significant. Today, there are many teenagers who respect Dhoni, but want to be Fernando Torres. Dhoni himself wanted to be a footballer.

Besides, the Indian football team is doing well again. It is even looking good, thanks to a deal with Nike signed in 2006. Though India were a competent football nation in the first half of the 20th century, the latter teams made for a pitiful sight. The players wore ill-fitting attire of inferi­or quality that stuck to their frail torsos. The team rarely won.

Those days are past. Under coach Bob Houghton, who remains committed despite India’s idiotic officials and lack of infrastruc­ture, Baichung Bhutia’s bunch is making a slow but sure climb. Last year, India won the AFC Challenge Cup to qualify for the Asian Cup after almost 24 years. The recent triumph in the Nehru Cup, made possible by goalkeeper Subrata Paul’s three penalty saves in the final against Syria, pushed India up eleven places in the Fifa rank­ings. They are now at 138 in a list of 203.

Bhutia remains the face of Indian football (and dancing, his critics at Mohun Bagan would say). But other stars have emerged. Like Sunil Chhetri, the ambitious striker who almost signed up for Queens Park Rangers (he did not get a work per­mit to play in the United Kingdom). Steven Dias, the shrewd midfielder, and goalkeeper Paul too have several admirers.

“Chhetri and Dias are my favourite play­ers,” says Taha Kachwala, 19. He is a student of Mumbai’s Jai Hind College and plays for Kenkre Academy in the city’s Super League. “Me and most of my friends like football more than crick­et. Cricket takes up too much time.”

Nipun Chauhan, 14, plays as striker for Bombay Scottish. To him football is a cooler sport than cricket. He is a true fan who is as well-in­formed about Dempo as he is about any glamor­ous European team.

The clinching proof of football’s potential is its embrace by the Hindi film industry. Bollywood is full of bad actors with supersize egos, but it is powerful and influential. It can make things hap­pen. Salman Khan attended the Nehru Cup final. Some recent movies, like Dhan Dhana Dhan Goal, have a football theme.

Shilpa Shetty and her boy­friend Raj Kundra visited the All India Football Federation headquarters some days ago. They are thinking of buying a team. From the equally pow­erful world of cricket, Rohan Gavaskar has en­tered the fray. He has bought a stake in the Pune FC football club.

At this point, you cannot imagine cricket ever struggling in India. Those who grew up on the game may continue to watch it as long as they live. But future generations of Indians who do not have the same cultural connection with cricket, who were not in the world on 25 June 1983, might be different.