Gambhir to Sherawat: An Evening’s Progress

From the sidelines of the most prestigious Indian cricket honours, the Ceat Cricket Rating awards 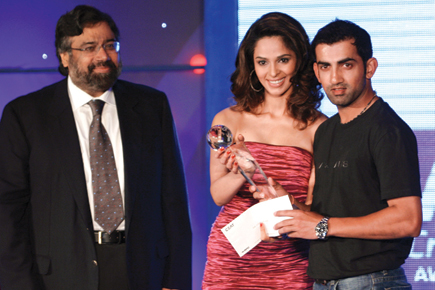 From the sidelines of the most prestigious Indian cricket honours, the Ceat Cricket Rating awards


On the night of 29 November, Gautam Gambhir was hungry. It was past ten. He helped himself to roti, yellow dal, spinach with corn. Then he sat beside Virender Sehwag (who else?). An opening pair that eats together makes runs together.

They were at the Taj Mahal hotel in Mumbai, among several stars from the cricket and glamour industries. The Ceat International Cricket Awards had concluded minutes ago with a performance by Mallika Sherawat. But the night belonged to the little quiet man in jeans and T-shirt. Gambhir had won two awards, including the most important one—the Ceat International Cricketer of the Year.

The Ceat rating system considered players’ performance from 1 May 2008 to 30 April 2009. Gambhir was successful in all formats of the game in this period. His Test record was dream-like. In eleven matches, he made 1,579 runs at an average of 75.19. There were five hundreds.

The cricketing sensex of Gautam Gambhir was always up. Many of his knocks were match-defining, none of these more than the Homeric 643-minute, 137 at McLean Park in Napier, New Zealand. India were following-on after New Zealand had made 619 in their first innings. Defeat seemed imminent. But Gambhir batted nearly 11 hours and saved the match for India. He should have claimed overtime from the board for the innings.

“Napier was my most satisfying knock,” said the 28-year-old with a flat, boxer-type nose and large, Barack Obama ears. “It is difficult to bat 11 hours. Giving your wicket away is so easy once you get 50 or 100. But when you have to bat to save the Test match and do what your natural game doesn’t allow… my gameplan is to score runs and not just survive, so this innings was a test of temperament and patience.”

Facing the first ball of the match remains a daunting task for Gambhir, even if he is now 27 Tests, 86 ODIs and several T20s old. It seems he has been asked often about the immense challenge of facing the first ball, the mental din that must precede it. Because when he is put the question again, he sort of shakes his head and says, “Tch.” Decent bloke that he is, though, he offers an answer anyway. “It is the most difficult thing I have ever done in my life,” he says.Once almost written off as a talent who tragically did not realise his full potential, Gambhir’s fame is now steadily rising. The two Ceat awards are portents of more recognition that would certainly come his way. “The Ceat Award is special because most of the guys who have won before have been legends,” Gambhir says. The trophy will pass from him to his mother, who will keep it in a closet that is filling up fast. Among the rewards that he would not pass on to his mother is a circle of ‘friends’, as revealed by Sehwag himself.

“Gautam is on his mobile phone all the time, talking or sending messages, perhaps to girls,” Sehwag says. “He never says who he is communicating with. If we ask, he says, ‘a friend’.”

As a father of one, Sehwag is no longer eligible for such friendships. But he is free to win awards. He was adjudged Ceat International ODI Batsman of the year. “ODI is an exciting format. I don’t believe it’s dying and am proud to win the award,” says Sehwag, whose maverick batting continues to beguile followers. One of his followers is Harbhajan Singh. “Bhajji is one of the players who like to watch my batting,” Sehwag says. “When I get out, he says to me, ‘Now I can go get my sleep’.” Harbhajan Singh was rewarded for becoming only the third Indian bowler to take 300 Test wickets. Among the other major awardees, Erapalli Prasanna was conferred the Lifetime Achievement Award.

Ceat Cricket Rating started in 1995. The first awards’ ceremony took place a year later. A left-hander, Brian Lara, was the first winner in the Cricketer of the Year category. Gambhir has now contributed another victory for the southpaws. Venkatesh Prasad and Sourav Ganguly are the other Indians to have won Cricketer of the Year. Sri Lanka’s Muttiah Muralitharan is the only cricketer to have won the award thrice.

“What began 15 years ago as a dream has become a definitive and comprehensive benchmark in deciding who’s the best in the world,” said Harsh Goenka, Chairman, RPG Enterprises, during the ceremony. Sunil Gavaskar, the adjudicator of the Ceat Ratings, said, “These awards are special because they are not subjective at all. They are not influenced by what we like. The yardstick is clear-cut—performance. Besides, there is a cash incentive. Trophies don’t put food on the table.” (Gambhir took home a cheque of Rs 5 lakh.)

Like a spinner opening the bowling attack, the evening started on a surprising note. Mansi Scott performed Michael Jackson’s Man in the Mirror, followed by Shut Up and Bounce. The Jackson song talks about being proactive in helping the needy (‘I’m starting with the Man in the Mirror, I’m asking him to change his ways…’).

“We wanted to do a ballad,” Scott says. “The choice was between What a Feeling and Man in the Mirror. The popular demand was for Michael Jackson. The second song, Shut Up and Bounce, was Mr Goenka’s request.”

It was an exciting evening for the performer, but she wants cricket to be looked at from the female point of view as well. “There are enough women who understand the sport,” Scott says.

Man in the Mirror seemed an apt choice when Gavaskar spoke about the Champs Foundation he started in 1999. The organisation helps former athletes who have fallen in penury. “There were reports in the media about a former Commonwealth Games medalists having to perform a coolie’s job, sell vegetables or pull rickshaws,” Gavaskar said. The Champs Foundation sends monthly cheques to needy athletes so that they can at least be looked after.

There is only one cricketer on the Champs mailing list, Salim Durani. It is not only Gavaskar’s way of recognising Durani’s spectacular cricketing prowess but also repaying his generosity. In 1971, some Indian cricketers were travelling to Vijayawada by train for a charity match. It was cold. Gavaskar had yet to play for India. The star of the team was not him but Durani. The ticket collector thus handed the only set of blankets available in the compartment to Durani. Durani offered the blankets to the young Gavaskar.

A few months later, after a stupendous debut series in the West Indies, Gavaskar became a hero. But the same Tests that once thrilled the cricketing world are now losing their charm. The future of the longer format was the subject of a discussion among Brad Hogg, Yajurvinder Singh and Kumar Sangakkara. The consensus was that Tests were not dead but innovation and repackaging was essential for them to be appealing again.

Then Mallika Sherawat took over, and everything seemed well.