Two Stars and a Constellation

In the end, it’s all about two geniuses and one superteam. Nothing else 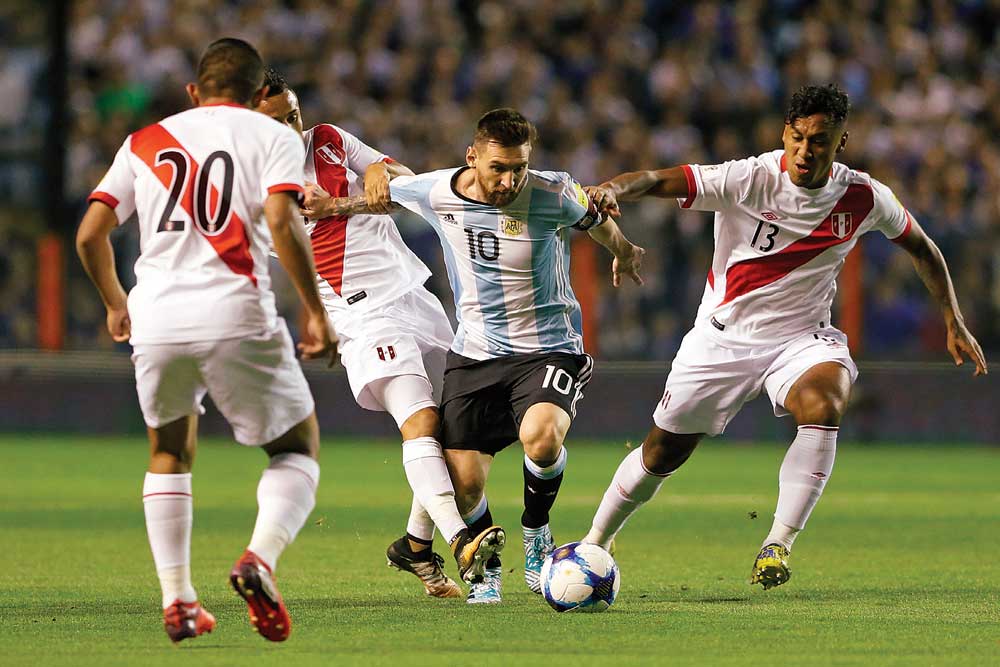 THE FIFA World Cup in Russia is not going to be about Russia, its politics or its national team, Sbornaya—or, for that matter Vladimir Putin—once this edition begins on June 14th (6 pm Moscow Standard Time). Russia’s successful bid to host the Cup may have been forged in the fires of political grime and corruption, but FIFA’s greed, Putin’s brazenness and his inept football team (who, magically, find themselves in the weakest group of the tournament) are nothing more than pre-tournament talking points.

Don’t be swayed by the drum roll either. The opening ceremony and Will Smith’s promised cameo and the ultras in the stands of Moscow’s Luzhniki Stadium; the mismatched colours on soccer boots, the suspicious refereeing, the slanting dabs by corner-posts; the next England calamity, the predictive octopuses and the biting strikers; these are but distractions to veil the truth.

Russia 2018 isn’t about the resurgence of five-time winners Brazil, who went on a 17-match unbeaten streak during the qualifiers under their new coach Tite (pronounced ‘chichi’) to become the first team to qualify for this edition; and it isn’t about the absence of four-time winners Italy, who missed out on their first quadrennial in 60 years thanks to the dire mismanagement of (erstwhile) coach Gianpiero Ventura. No, this World Cup is not about mass participation either: the Atlas Lions from Morocco, returning to the world stage after two decades, or debutant Iceland, the smallest nation ever to qualify for the most widely watched tournament in this universe. Most of the 32 participating countries are here to make up the numbers. Here to put the World in the Cup.

Distilled to its essence, Russia 18 (more than any other edition in recent memory) is focused, magnified through the lens of a few billion watching eyes, on the twinkling feet of two men—Argentina’s Lionel Messi and Portugal’s Cristiano Ronaldo. Not since France 98 has fanfare over individual finesse been as complete, as absolute (back then, the world’s attention was on France’s Zinedine Zidane and Brazil’s Ronaldo and the two met in the final, the unworldly pressures making the former rise to the occasion with two goals and crippling the latter with high fever). And as long as one or both of them remain in this tournament, everything else in Russia is just noise, colour and pilferage.

Messi and Ronaldo. Two sides of the word ‘artistry’. Ronaldo and Messi. Synonyms for effort and effortlessness, respectively. It is universally accepted that both are geniuses and that one of the two is certainly your god (depending on which side of the debate you squat). But gods and geniuses come in many forms, occupy several bodies; no such wiggle room with the title of ‘greatest’, whose pedestal is placed on a roof so sharp and small, it has barely enough space to allow one man to hang on by a fingernail.

Several eras can and have passed with many greats and not a single occupancy on the rarefied roof. But now, simultaneously, miraculously and for a long while, two separate fingernails have hung in there, Real Madrid’s Ronaldo and Barcelona’s Messi shoving and feigning and dinking and floating and sidestepping their feet in this quest to get a better handhold at the top. The endgame, however, is in sight and both can feel with their fingertips the word’s embossed alphabets. The one with a maiden World Cup trophy in hand would’ve also firmly, instantly and unanimously gripped the title of ‘greatest’ with the other.

Ronaldo and Messi. Two sides of the word ‘artistry’. Synonyms for effort and effortlessness, respectively

As club players, and without going into the specifics, it is impossible to tell their achievements apart. Both have scored countless goals over countless seasons to win countless Spanish and European titles, all while playing against each other for the two most storied rivals in world football. The only way to pry them apart is to prod them with crowbars into their respective national jerseys. Still, the similarities far outweigh the differences. Both Ronaldo and Messi have featured in three World Cups—the same ones in 2006, 2010 and 2014—and four intercontinental championships each (Euro for Ronaldo, Copa America for Messi). And herein lies the difference. While Messi has made three Copa America finals to Ronaldo’s two, Messi’s Albiceleste has fallen at the final hurdle on all occasions. Ronaldo’s Portugal, on the other hand, won the most recent edition of the Euro two years ago in France.

The Euro 16 title, one must understand, is football- crazed Portugal’s only international silverware of worth. It catapulted Ronaldo’s celebrity status from star to the country’s greatest mortal, dead or alive. Greater than the revered Luis Figo (alive). Greater than the venerated Eusebio (dead).

Argentina, unlike Portugal, haven’t been starved for international glory, with 14 Copa America titles and two World Cup trophies—none of them thanks to Messi; one thanks to Diego Maradona. So, on the streets of Argentina, it perhaps explains why a coke-snorting, rule-bending, death-cheating Maradona is considered a saint; and a God-fearing, rule-following, game-studying Messi, who gets his kicks from football and football alone, a sinner.

In 2015 and 2016, Messi lost two back-to-back Copa America finals to Chile, the second of which broke his will badly enough to push him into international retirement at the age of 28 (he, mercifully, returned the following year to help Argentina qualify for Russia with a hattrick in their last match against Ecuador). But the loss that had the most devastating effect on Messi’s life was at the final of the 2014 World Cup in Rio de Janeiro, Brazil, where, two minutes before the match would be sent into a penalty shootout, Germany’s Mario Götze found the back of Argentina’s net.

Since the turn of the century, three out of four World Cups have witnessed the title-holders fizzling out in the group stages itself

In each of Messi’s three World Cup appearances, Germany had sent him and his team packing. As individuals, the Germans range from good to great. But as a unit, as a team—and this makes them a much- watch side in Russia 18—they function with the force of 11 Messis. When the final whistle blew at the Maracanã and Götze walked up to the sobbing Argentines with an outstretched hand, Messi held his face in his palms and his legs buckled. When his knees crashed against the grass, the tremors, it is said, could be felt all the way to Buenos Aires.

WORLD CUPS DON’T end quietly. The sonic dome of firecrackers and the popping corks of champagne, those are the soft sounds; heard only by fans of one nation. A lot louder are the cries of anguish—broken seats, broken bottles, broken knuckles and giggling walls. When hosts Brazil lost to eventual champions Germany in the semi-finals of the 2014 edition, the boom of exploding hearts echoed across its vast lands on a carnivalesque scale. But the loudest sound is always produced by the losing finalist, and their loyalists.

During Brazil 14, hundreds of thousands of Argentines drove across the border and arrived in Rio de Janeiro a day before the final, occupying every parking lot, peaceful nook and quiet cranny in the city. They were boorish and brilliant, crass and clever, loud and lovable, teasing their neighbours, the mourning Brasileiro. Hours later, at the Maracanã, Argentina lost. And hundreds of thousands of men and women in Messi’s sky-blue-and-white stripes drove back across the border far more noisily than they had arrived—in ear-pricking silence.

Of the 211 nations registered under the FIFA banner, 210 spend the next four years licking their wounds. Club football proves to be a worthy distraction, but the silent agony of the previous World Cup lives on, through international friendlies, intercontinental championships and World Cup qualifiers. And sometime during these sporadic interactions with their countrymen, the anticipation for the next World Cup begins to slow-cook; the lid of pressure sitting heaviest over the defending champions, akin to an uneasy crown. Since the turn of the century, three out of four World Cups held so far have witnessed the title-holders fizzling out in the group stages itself: France in 2002, Italy in 2010 and Spain in 2014. The strain on Germany—winners of the 2014 edition in Brazil—to buck this trend in Russia this summer, hence, is immense.

Die Mannschaft, or the German national team, did more than simply win their fourth World Cup in Rio; they proved that they were indeed worthy of the label of ‘Golden Generation’—or, the greatest set of players to represent Germany at the same time. Planned, produced and prepped with the future in mind after an ageing German side lost in the final of the 2002 World Cup, the likes of Philipp Lahm, Bastian Schweinsteiger, Per Mertesacker, Miroslav Klose and Lucas Podolski became the key pistons in Germany’s heart for close to a decade. This universally feared engine-room, however, spluttered on the biggest stages, always seizing just short of the trophy in two World Cups and as many Euros—in the final once (Euro 08) and in the semis on three occasions (World Cups 06 and 10, and Euro 12).

Germany did more than simply win their fourth World Cup in Rio; they proved that they were indeed worthy of the label of ‘Golden Generation’

By the time the quadrennial in Brazil came around, it was all but certain that this was going to be the final opportunity for Germany’s finest, led by captain Lahm, to preserve the word ‘gold’ in ‘Golden Generation’. When they did, in the penultimate minute of a month-long campaign, Lahm achieved a feat even more remarkable than becoming the first captain of a unified Germany (West Germany had won the trophy thrice) to win a World Cup. By hoisting the Jules Rimet trophy into the crimson Rio air, Lahm had inadvertently played god with the storyline of two World Cups.

The overwhelming theme of 2014, Copa das Copas (or Cup of Cups, since the spiritual guardians of the game were hosting it), lay in tatters after Germany’s 7-1 win over the hosts in the semi-finals. And by denying Argentina the trophy in the final, Germany had set the predominant narrative for Russia 18 four years in advance: Messi, and his quest to stitch another star on the Albiceleste jersey.

Argentina and Portugal, teams powered by one- man turbines, find themselves in relatively easier groups than Germany, whose title-defence will -depend on an all-new engine-room (Lahm, Schweinsteiger, Mertesacker, Klose and Podolski all retired following their World Cup success). While Messi faces up against midcards Croatia, Nigeria and Iceland in Group D, Ronaldo is up against an ageing heavyweight and two featherweights in Group B—a transitioning Spain and the non-entities that are Morocco and Iran. Germany, meanwhile, find themselves in this edition’s group of death, surrounded by Mexico, Sweden and South Korea in Group F.

Still, finding a safe passage to the knockout stage shouldn’t be much of a problem for Germany, given that its core now consists of Toni Kroos, Jerome Boateng, Thomas Müller and Mesut Özil —all men who know what it takes to win a World Cup; all men thrilled not to be in either Messi or Ronaldo’s shoes for one month every four years.

Putin’s Footie and El Diego
The Last Glory
Golden Feet
Big Bear Hug
Romancing Brazil
The Fault in Their Stars
Confessions of a Football Hooligan
What Are We Doing There?
Mise En Soccer