Dribbling out of the Mess

There is no guarantee India will reach the World Cup semis, but suddenly hockey is alive again, on the field and in the hearts of millions of Indians. 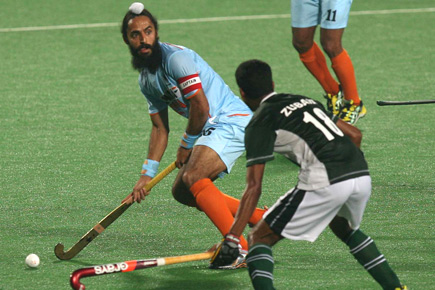 There is no guarantee India will reach the World Cup semis, but suddenly hockey is alive again.


Quoting the local taxi driver is a cliché of reporting. But when the cabbie is Raj Kumar of Delhi, whose sporting knowledge spans Sandeep Singh the hockey player and Milkha Singh the sprinter, you cannot help write about him.

It was the Holi Monday. I stepped out of the maze of lanes in South Extension Part II and hoped to find a sober autorickshaw driver to take me to the Major Dhyan Chand National Hockey Stadium. Raj Kumar agreed. Within moments he was talking hockey. He was not talking as much as holding forth. India had beaten Pakistan the previous night and the thrashing they received against Australia in the next match was yet to happen. The thoughts and sentiments of Raj Kumar, built up over the last 24 hours, perhaps over the 50-odd years of his sports-worshipping life, were pouring out.

“Hockey is our national game,” he said, looking at me in the horizontal rear view mirror. “The Government must support it.”

“Cricket is business most of the time. Especially the IPL. Bhajji has a police job, but I have yet to hear of him visiting the thana (police station). Why would he? He has so much money. What we saw yesterday was real sport.”

“My son is in standard XII. He has his physics paper tomorrow. But he is watching all the matches.”

These are but snatches from Raj Kumar’s monologue to the rear view mirror. I didn’t mind his refusal to let me into the conversation. In fact, his ramblings were both oxygen and music to me. Because they convinced me that hockey was not dead. Yes, the game still has a long way to go. India have much to do in the World Cup. They might not even make the semifinals. But dead, the sport is not. If something can be the highlight of Sachin Tendulkar’s evening and impact the physics performance of a rickshaw driver’s son in Delhi, it must be alive. It must also be important.

“I saw the match, and it was a very exciting match with a lot of tension at the end,” Tendulkar said. “I want India to win in every sport they play and that is why I was happy when they won that match against Pakistan. I always want India to do well in all sports and, as a fan, I am always there to support them.”

On the eve of the tournament, Bobby Pawar, a well-known advertising man, said this to a newspaper: “Why should I watch hockey?” It is a question that has been asked by many of us in advertising or media, by the ‘opinion makers’ who are supposed to have their fingers on the ‘nation’s pulse’. We shouldn’t always be so sure of ourselves. Because sometimes we don’t have a clue.

To Bobby and those like him, this is why you should watch hockey. For the blur of Rajpal Singh’s legs as he tears down the flanks at a speed of 4.11 seconds over 30 metres, one hand controlling the ball. He is the fastest in the Indian team. His bow legs and stick make him look Chaplinesque, and like Chaplin what he does is an art. Rajpal’s pace stood out even in the rout handed out by Australia.

You should watch hockey for the way Sandeep Singh, with a fraction of a second at his disposal, gets his stick under the ball and drag-flicks it goalward with power. For the doggedness that teams show in a scramble, thrashing their sticks around to secure the ball, like family members trying to corner an agile mouse. Finally, you should watch it for the ripple of goose pimples that travels toes upwards when you stand up, along with 16,000 people, to join the Indian team in singing Jana Gana Mana.

“If you could feel it, imagine what a rush it must be for the players,” says Viren Rasquinha, former India captain and now management hotshot. “You can be one of the highest-paid CEOs in the country, but you cannot get that adrenaline boost unless you are a player.”

At prime time at the Dhyan Chand Stadium, 224 floodlights, 56 in each of the four light towers, shine like white diamonds and illuminate the field. The Poligras pitch is green like the billiards baize. Every time India are on the turf, Rasquinha is around. Fair and shaven headed, he looks part Zinedine Zidane, part Tom Hanks in Philadelphia. Though retired, he is just 29 and thus a friend to most of the players. Importantly, Rasquinha is that rare hockey player who has sophistication and education, and is thus seen as the man who will get acceptance in the ivory towers of advertising and journalism, and, once inside, convince the smug inhabitants of these edifices to give hockey their time and money.

“It is my duty to help the sport,” he says, even though he is not formally associated with the team. “Hockey still touches the heart of every Indian. The match against Pakistan proved it. Half the country was watching. The sport has a future,” says Rasquinha. He must have known the Australia match would be difficult, because even before the match he was hoping that fans would be behind the team in defeat. “Just as a sportsman’s real test is when he is low, the fans’ test is when the team is down.” Indeed, after the loss to Australia, it was heartening to see the crowd still chanting “India, India!”

The case of hockey is curious because it is a major sport in some ways and a marginal one in others. In India it is a major sport for historical reasons, for its ability to excite the masses and the prospects of the current team. Yet, a player cannot make a living out of playing for India. His livelihood comes from his employers and representing them in domestic competitions. True, there is a burst of incentives after a performance such as the one against Pakistan. But this is not the ‘steady income’ so dear to Indians. Also, such announcements are often publicity stunts and it takes long for the money to reach the players, if at all. Playing for India, therefore, is something hockey players do on the side. Then again, one thing drives the other. If they are not in national reckoning, it would weaken their job prospects. Therefore, a respectable match fee for players is something Rasquinha and hockey well-wishers are working towards.

“When you are 20, you can say ‘desh ke liye khelenge (will play for the country)’. When you are 25 and above, you have to put food on the table,” Rasquinha says.

Ideas are all very well. But who has the authority to implement them? Only Hockey India (HI), the sport’s governing body in the country. But after the resignation of its chief, AK Mattoo, during a recent player revolt, the HI is almost a defunct organisation with hardly any personnel. The Sports Authority of India and Suresh Kalmadi seem to be running the show here too. The International Hockey Federation, the FIH, has issued the HI an ultimatum to conduct its elections by May. Else India would be barred from international competitions. The FIH has also emphasised the need to revive the PHL (Premier Hockey League) and has announced a World Cup of Clubs in India in December. Followers hope the HI gets its house in order.

And yet, the FIH would hate to banish India. Because India is where hockey’s ambition to become a rich sport can be realised. This is the biggest market for the game, however mismanaged and stubborn it may be. The world of hockey is full of ironies.

“India is critical if hockey has to be commercially successful,” the remarkable Dr Ric Charlesworth, who played pro hockey and cricket and became a doctor and a politician in one lifetime and is now the Aussie coach, tells Open.

It is amazing what a couple of good performances in well-attended matches can do. The mood around the sport is one of optimism, although of a cautious kind. For a sport all but written off just days ago, this is a big step. Even Dhyan Chand’s statue on the tree-dotted premises of the National Stadium seems to be smiling more than usual these days.