After an astonishing 2009, Virender Sehwag has been named by England’s The Daily Telegraph as ‘the player of the decade’. Open talks to the Nawab of Najafgarh about his plans, and finds that this man does not even know how to think small. 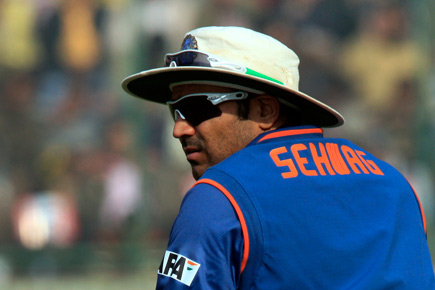 Named ‘player of the decade’ by The Daily Telegraph, Virender Sehwag is on another high. He talks about his plans.


He is the man of the season. While some say he has redefined the art of batsmanship, others have gone a step further in asserting that there are now two coaching manuals in cricket—the first is the conventional, known to us as the ‘MCC manual’, and the second is what has been decreed the ‘Virender Sehwag Manual of Batting’. While this might be taking things a bit too far, there is little doubt that 2009 was Virender Sehwag’s year. Here’s Sehwag in a freewheeling conversation about his resolutions for 2010, his batting and his predictions for team India.

Q Viru, 2009 is the best year you have had in your career, isn’t it? Fantastic series in New Zealand, a 293 in the last Test of the year followed by a 146 in the one-dayer at Rajkot, you are being credited with redefining the art of batsmanship.

A I am batting really well. I have always played well in Test cricket except when I had a lean patch in 2007. But yes, this year has been special. I am looking to dominate, playing my shots and getting the big scores. I have always said to Gautam that getting a 100 is not enough. Get double or even triple hundreds. That’s how you can create fear in the minds of the opposition bowlers. Unless they are in awe, they will not show you the respect you deserve.

Q Now that you are getting these big scores with regularity, people have started expecting miracles from you. Are you feeling any extra pressure?

A No. I try and negotiate pressure in my own way. Of course there’s pressure, but you have to come to terms with it and carry on. For example when I scored 293, I was continuously singing bhajans [devotional songs] out there in the middle. New songs, old songs, everything. Whatever I listened to in our dressing room I was humming out in the middle. You can ask Tendulkar, he will tell you that I always do this—sing bhajans while batting. That way I can continue doing what is expected of me.

Q Amazing! So are you in that ‘zone’?

A I don’t want to sound pompous. But I can surely tell you that once I get to 60 or 70 there’s no bowler in the world who can get Virender Sehwag out. Only Virender Sehwag can get Sehwag out at moments when I am batting the way I am currently. My philosophy has always been to make the most of the situation when you are in form. So when I go out there, I identify a bowler and get after him. If he is the best bowler in the opposition, your job becomes much easier.

Q But scoring 280 not out in Test match cricket is phenomenal—is it a plan or did it just happen?

A There are no conscious plans like this in place. I have made it very simple for myself. There are 90 overs to be played in a day. If I am able to hit a boundary in 80 of these I can get to a triple hundred by the end of the day’s play and set a match up for my team. Gavaskar and Srikkanth have told me that I should just hold off for the first 15 minutes or the first four of five overs. Once the initial 15 minutes are over, I can get to many more hundreds. That’s exactly what I am doing.

Q That was my next question. Have you changed your approach to batting? It was evident in Mumbai that you were consciously playing out the first few overs…

A Yes I have. I was going for shots a bit too early I think. Once the first 15 minutes are over, I am in complete control of the innings and can start to play shots at will. This approach, I am confident, will get me many more hundreds in 2010.

Q Big year coming up for Indian cricket, marquee series against South Africa and then the T-20 world cup. Your thoughts?

A It will be a great series against South Africa. They are a very good side, but with the kind of form we are in, we can beat them. At home we should look to dominate against all opposition. I am looking forward to playing against them. Coming to the T-20 world cup, we have a very good side. I was out injured in the last edition in England and am looking forward to contributing to the team’s cause in the West Indies. I firmly believe that if we can play to potential we can win back the cup we won in 2007. With the kind of talent we have in our team, there’s no doubt that we have a good chance. It is important to have our full team for the tournament, though.

Q Any special resolution for 2010?

A Keep scoring heavily. We aren’t playing too many Tests, but in the limited number of tests we are playing, I want to get a 1,000 runs. My ambition is to get 1,500 or even 2,000 runs in a year in Test matches. I am physically okay, can bat long, bowl long and want to make the most of this phase.

Q With the 2011 World Cup coming up, we need you to be in good physical shape.

Q You have opened with both Tendulkar and Gambhir. While Sachin is the best the world has seen, Gambhir currently tops the ICC rankings. Talk about batting with them.

A They are different players. When I am batting with Tendulkar I am under no pressure because everyone is focused on him. When I am batting with Gautam we take a lot more risks. You will see us run a lot more singles. We have been playing for years and have a great understanding and we take a lot of risky singles when batting together. When batting with Tendulkar, he doesn’t run risky singles. He always tells me it is not worth risking your wicket for a single. Both are great for Indian cricket and it has been fantastic to be able to bat with both of them for a period of time.

Q Final question—what’s the reaction in the dressing room when you’re batting the way you are now?

A All my teammates keep urging me to keep going. They know that if I can bat through a day, the team will get a score of 400 plus and that way our bowlers will have maximum time to bowl the opposition out. Accordingly, they always encourage me to keep going and bat for the maximum number of overs.