‘Success came like a whirlwind for us,’ says Albinder Dhindsa 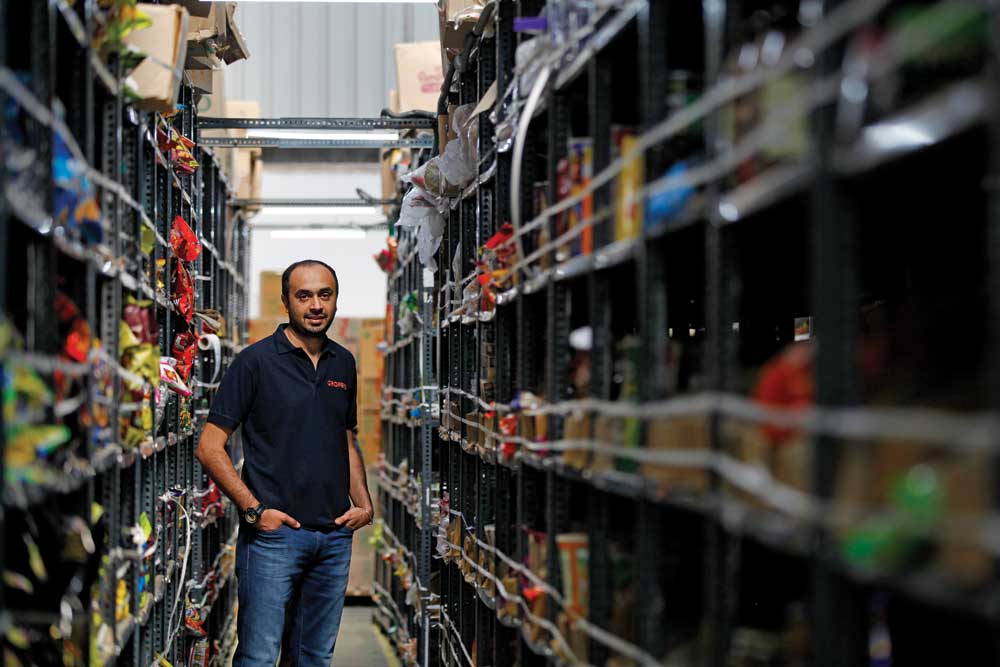 The last three years have been nothing short of a rollercoaster ride for Grofers, the company that promised to revolutionise grocery shopping, and its co-founder Albinder Dhindsa. In 2015, the company closed a deal of Rs 800 crore in a round of funding led by the Japanese SoftBank Group and became one of the most heavily-funded hyperlocal companies in the country. But by the end of 2015-16, reports claimed the company was staring at an annual loss of Rs 225 crore on revenues of only a fraction of that figure: Rs 14.3 crore. A few months on, Grofers was still recording monthly losses of over Rs 7 crore on revenues of barely Rs 5 crore. Soon after, it laid off 10 per cent of its staff and temporarily closed operations in nine Indian cities. Expenses had gone haywire. It was time to do some brainstorming.

“Success came like a whirlwind for us in 2015. When we launched our phone app, it caught on like wildfire. People needed a quick and convenient way to purchase groceries, and we were solving that problem for them. But we hit a roadblock, not necessarily a dead end, when we tried to scale up our operations. We quickly realised that this was a sector where scalability was going to be an issue,” says Dhindsa. The first and most glaring problem to tackle was a fragmented and convoluted supply chain which was creating problems with delivery consistency. “In India, supply of goods inter-changes between three or four hands before it reaches us retailers. It goes from the company to an agent to a regional distributor—all of which takes time and resources. On the whole, the process is erratic, inefficient and leaves several factors out of our control. So we thought, ‘Why not build our own supply chain?’ Why can’t we source directly from the companies? Why not process items and ship them ourselves? Instead of just delivering goods, let’s play a bigger role in managing and sourcing them,” adds Dhindsa.

But the company’s tiny revenue figure in 2016 wasn’t nearly enough to convince the big names to supply to Grofers directly. “What we were planning was to take the entire supply chain into our own hands—build our own warehouses, even launch our own brand of household essentials. It was difficult to convince the 1,200 companies we worked with to come on board, but once the first few did and our revenues shot up to $11 million a month, the rest followed suit. Now, nearly all the companies that we stock, close to 95 per cent of them, supply us directly. We might not be the first or only e-grocers to have our own supply chain, but we’re certainly the fastest-growing one,” says Dhindsa.

Grofers also invested in setting up 22 warehouses to keep its stock in ten Indian cities, including three 60,000 sq ft storage facilities in Delhi, Bengaluru and Gurgaon. Other cities like Hyderabad, Chennai and Jaipur have smaller 20,000 sq ft warehouses.

It didn’t take long for Dhindsa and his team to realise that having a captive supply system was working, and working well. The warehouses didn’t just help the company avoid hiccups with the flow of goods but also allowed for better quality control and margins. Business started picking up from February 2017 onwards, and in the last four months, Grofers claims to have had a sales spurt, with the annualised figure now at about $120 million or Rs 768 crore. While it might not have a substantial rise in daily orders (around 14,000 compared with 13,000 last year), it is the huge jump in the daily order value which accounts for the surge. The average order value currently stands at Rs 1,300, compared to the Rs 1,000 it notched up in December 2016 and Rs 750 in July 2016. During its Independence Day sale this year, the company reports having shipped 2.7 million items across India. “The interesting thing is that while we were tweaking the supply structure and making changes to our inventory and overall goals, we came across valuable customer insights. So once we had become our own suppliers, we didn’t stop ideating. There were other changes that we wanted to make as well,” says Dhindsa.

Supply of goods in India is erratic and fragmented. So we thought, why not build our own supply chain?

ONE OF THESE was starting its own private label for essential grocery items and offering them to customers at lower prices than alternatives in the market. “Customers want the best deal, the most hassle-free service. We’d worked on the service, now we were focusing on the products themselves. There was no big company focusing only on staples like spices, poultry, pulses, rice, nuts, etcetera. We took that into our own hands,” says Dhindsa. It took eight months for the company’s sourcing team to get enough farmers on board and set up transport links and efficient management systems before it could launch 16 Best Value products in late 2016. Today, there are 400 products available under that label, and the range of offerings is quite varied—from white sesame seeds to basmati rice, brown sugar, tandoori chicken, red masoor, sooji, peri peri prawns, flour, baking soda, fish and sausages. Together, the Best Value range makes up 20 per cent of the company’s total sales. “It is a challenge to have your own label and stock. Farmers need transport links; not everyone is able to bring their produce from the mandi to our processing plants. Contracts are made, but since it’s our supplies that are at stake, if a farmer needs transport, we provide it. One has to understand and respect the needs and limitations of suppliers for a partnership to be successful,” says Dhindsa. There are close to 60 farms in Delhi and Mumbai from where Grofers currently sources fresh fruit and vegetables. “We also keep handwash and toilet cleaners now, general household merchandise that we offer at the best price to buyers.” However, the effort is well focused. Despite the introduction of new product lines and categories, the firm’s number of Stock Keeping Units has declined from close to 12,000 at its peak to around 6,000 at present. “We’re interested in giving customers the most popular products at the best value,” explains Dhindsa.

Grofers, which once championed 90-minute deliveries through its mobile app (and claimed to take an average of only 40 minutes to meet orders at one time), has also revamped its delivery system. Around 80 per cent of its orders are now delivered through vans instead of the earlier motorbikes, and they reach only the next day. Vans can fulfill not only bigger orders but also more of them, and the extended delivery span hasn’t affected customer satisfaction, says Dhindsa, because the focus is now on something buyers value even more—affordability. While in 2016 the firm concentrated on lowering its delivery and turnaround time for orders, now it’s more about offering value for money. “All the changes we’ve made were done using our in-house team and logistics. The tide turned in our favour when we starting scaling operations with a slightly altered vision—offer what’s needed and crucial to a buyer, in a convenient way, and at the best, most affordable price,” says Dhindsa.

Often labelled a hyperlocal-cum-e-grocery firm, Grofers maintains that this isn’t e-commerce in the conventional sense. Instead, it portrays itself as a ‘service’ since it delivers products that are vital for running a home. Unlike books and games and clothes, food items are both perishable and at the top of everybody’s to-do list, and so most of the traditional rules and limitations of e-commerce do not apply to this 4-year-old online superstore. What does apply all the more to it, though, is reliability and trust—nobody wants to run out of staples like rice, sugar or salt, and then have to make provisions at the last minute because a Grofers order did not come through. Currently, 85 per cent of the firm’s orders are repeat ones, and most buyers shop at least twice a month with an average order of 16 items. Dhindsa says he and his team are committed to order consistency and dependability, for it isn’t just profits that depend on this but the very survival of their business. “Imagine the disappointment or anger if even a single item in an order is missing or of poor quality. If we are providing key items that make up a kitchen, we cannot ever afford to mess up. Customer faith is very important to us,” he says.

So is customer acquisition a top priority now in the months ahead. “We plan to scale up quickly now that we have our supply chain and delivery network advantage. We’ll be adding more value and popular brands and laying emphasis on gaining the confidence of more buyers,” says Dhindsa, who used to head international operations at Zomato, a food delivery app, before he joined co-founder Saurabh Kumar and began working full- time on Grofers in 2014. Grofers had first been launched in 2013 as a hyperlocal service with seven stations in Gurgaon. It started with a seed funding of $500,000 from Deepinder Goyal, founder of Zomato, and Sequoia Capital, and quickly grew to a team of over 900 offering pan-India services.

In its quest for speed and expansion, it overreached itself. In 2016, when its business model started looking bizarre, Dhindsa admitted in an interview to Economic Times that some of their original assumptions were “a little off the mark” and that what they had been trying to solve was “a much smaller piece of the overall puzzle.” He adds to this now: “We had thought convenience was essential when we started. Over the years we’ve realised uninterrupted supply and the value of products are also indispensable.”

Born in Patiala, Dhindsa studied engineering at IIT Delhi before moving to the US to pursue an MBA at Columbia University. Tackling challenges at Grofers, he says, has given him a sense of purpose. It has been a worthwhile whirlwind. “We wanted to build something ambitious, something meaningful that would provide real value to everyday customers. I feel that if someone can buy Rs 5,000 worth of goods for Rs 4,000 through our company, then I have contributed, perhaps even changed that person’s life a little bit—that extra Rs 1,000 could go towards his children, even their education. Every bit we help people save, counts.”