With the violence in China earlier this month, the world woke up to a new, disgruntled ethnic minority 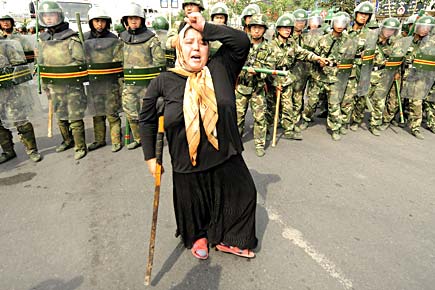 With the violence in China earlier this month, the world woke up to a new, disgruntled ethnic minority


Early this month in China, violent clashes broke out in the city of Urumqi (the name means ‘beautiful pasture’). Hundreds died and suddenly, the world woke up to a new, disgruntled ethnic minority called Uighurs. The Chinese government paints them as ‘terrorists’, using the fact that the Uighur are predominantly Muslim. But, as we all hurried men know, the only relationship totalitarian governments have with the truth is in creating it.

Who then are these Uighurs? They are a Turkish ethnic group found in parts of eastern and central Asia, the name of the ethnicity and its language spelled variously as Uighur, Uygur and Uigur, with the preferred spelling being Uighur.

Uighurs live mainly in the Xinjiang Uighur Autonomous Region in China. They were by far the largest ethnic group until there was a massive influx of Han Chinese in 1949. Now, Uighur exile groups claim the Chinese government is suppressing their culture and responding to demands for independence with human rights violations.

In 1949, Chinese nationalists lost the civil war to the Chinese Communist Party. East Turkestan’s rulers agreed to cement a relation within Mao’s People’s Republic of China. But a plane crash killed most of the East Turkestan Republic’s leaders on the way to Beijing to negotiate terms of the confederation. Soon after, General Wang Zhen marched to Xinjiang to wipe out anti-Chinese ethnic stirs.

The remaining East Turkestan Republic leadership under General Saipidin Eziz surrendered to Mao’s terms. They agreed to turn Xinjiang into the Xinjiang Uighur Autonomous Region (Xinjiang meaning ‘New Frontier’ is a name loathed by Uighur separatists who prefer to use historical or ethnic names such as Uighurstan or Eastern Turkestan). The Eastern Turkestan Republican Army was forced to join the People’s Liberation Army (PLA) and Saipidin Eziz appointed the region’s first governor.

The Chinese government began censoring all mention of the name East Turkestan. They also declared the display of the republic’s blue star-crescent flag illegal. But nationalism is not so easily quelled; it can lie dormant and abruptly erupt when no one’s noticing. Though the Chinese government might have got this eruption under control, we haven’t seen the last of the Uighurs.