The Demise of the World’s Oldest Man

Most ‘oldest living persons’ happen to be residents of Japan, which at last count was home to over 58,000 people aged over 100 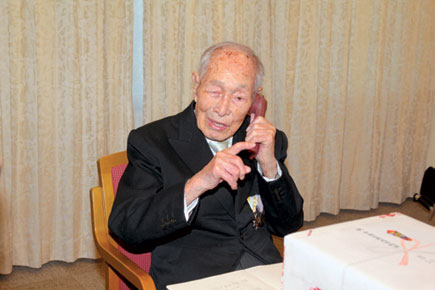 Sakari Momoi, who made it to the Guinness Book of World Records in 2014 for being the oldest man alive, passed away at 112. He is said to have attributed his longevity to a healthy diet and a good night’s sleep—both of which are quite elusive in this day and age. He was a high school principal and is said to have enjoyed calligraphy and participated in recreational activities at the care home he lived and eventually died in.

Momoi was born in February 1903, the year which saw the world’s first successful air flight conducted by the Wright brothers and the first teddy bear. Momoi was 42 years old at the end of World War II. His fellow Japanese Yasutaro Koide, born in March 1903, now holds the Guinness title of the oldest man.

The world’s oldest woman, however, is New York-resident Susannah Mushatt Jones, who at 116 has 100 nieces and nephews and is also the world’s oldest person. She was born in the 19th century—1899 to be precise. An interesting point to note here is the fact that most ‘oldest living persons’ happen to be residents of Japan, which at last count was home to over 58,000 people aged over 100, of which almost 87 per cent were women.

According to experts, perhaps the reason for Japan’s remarkable record of such high life expectancy is the traditional Japanese diet. It’s low in fat and features the regular consumption of soy sauce and miso soup—both of which are high in salt. But if we are to believe those who have survived two deadly World Wars, the secret of a long life is long-lasting friendships, avoiding tobacco and drinking only in moderation. Well, may their tribe increase!