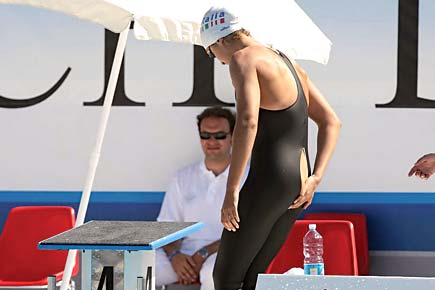 
In early July this year, Italian swimmer Flavia Zoccari became both a metaphor and an omen for Federation Internationale de Natation (FINA), swimming’s international governing body. Just before a race at the Mediterranean Games, Zoccari’s high-tech Jaked bodysuit burst open in the rear, forcing her to drop out of competition.

Four weeks later, that’s the state of the sport: All its embarrassing bits are hanging out, exposed by the newest generation of swimwear. At the world championships in Rome, swimmers are cramming into speed-engineered, air-trapping, water-impermeable suits that have been kicking the record book to soggy shreds.
FINA announced it would ban full-body suits—but not till 2010, and still pending wrangling over the meaning of the word ‘textiles’.

The once-unbeatable Michael Phelps, contractually stuck with the Speedo LZR that helped him dominate in Beijing, is struggling to stay ahead in his now-obsolescent swimsuit. This after a new breed of racing suits, most notably the much-hyped LZR Racer, had taken sleekness to new limits only last year much to the chagrin of less ‘endowed’ competitors who raised accusations of ‘technological doping’.

To make its latest high-tech, skin-like suit, Speedo enlisted NASA’s wind tunnels, a water flume at New Zealand’s Otago University, and the once-radical fashion design of Comme des Garçons’ Rei Kawakubo. Whatever Speedo was doing seemed to be working: “When I hit the water (in the LZR Racer), I feel like a rocket,” claimed Phelps. Until now.

In 2008, an unprecedented 108 world records were set, the majority by athletes wearing LZR. This year, 24 world records were broken by swimmers wearing suits with fewer panels and seams and more polyurethane than the LZR. Last year, Speedo was the big story, but by the latest count, 22 other manufacturers have entered the race. The LZR suit and Phelps have already been outstripped by polyurethane models. The challenge today isn’t between the swimmers; it’s between manufacturers. When the engineers are overshadowing the swimmers, the sport isn’t just changing. It’s disappearing.