The Bhumata Ranragini Brigade, headed by Trupti Desai, led the protest. As she was detained, she called it a “black day” for democracy 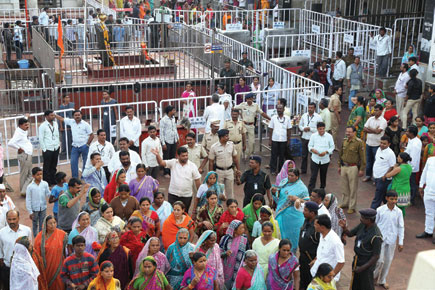 It could have been a historic day for Hindu women, who planned to enter the inner sanctum of the revered Shani Shingnapur temple in Ahmednagar, Maharashtra, last Tuesday. Alas, patriarchy and an age-old tradition trumped faith, and the trailblazing women and men, so to speak, were detained (and later released) by the police. Not surprisingly, the thwarted desecration was cause for much celebration. The Bhumata Ranragini Brigade, headed by Trupti Desai, led the agitation. As Desai was detained, she called it a “black day” for democracy.

The temple authorities say that the inner sanctum has been closed to everyone for the last five years. However, men who donate a particular amount in the name of a deity can enter. All that Desai demanded was women be allowed to enter on donating such a sum. This became a bone of contention among believers and temple trustees.

There are several places of worship in India that forbid entry to women. From Haji Ali Dargah to Sabarimala temple, it has sadly become acceptable to several people that it’s okay to bar women from entering such sacred spaces. Arguments that a menstruating woman is impure or that a celibate god would be offended are plain absurd.

Women also have to contend with such remarks as, “If you’re not allowed to enter, then why do you want to go there?”, “Why don’t you go to another place of worship?” and “Leave the gods alone, they want it this way”. None of these arguments is valid. It’s a matter of faith—and nobody, not the most ardent believer nor the atheist, is allowed to take that faith away from anyone. We live in the 21st century. It’s about time we behave like it.