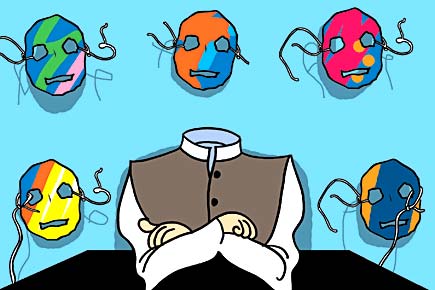 What with the country caught up in the throes of an elephantine election, it seems like a good time to re-acquaint ourselves with the oldest of Indian vote-grabbing cliches, especially that chronically misused term coined by British writer George Jacob Holyoake.

Holyoake was imprisoned in 1841 for committing blasphemy in a public lecture. It did not matter that his speech had no theological character and the incriminating words were merely a reply to a question. He was imprisoned for six months. After his release, he came up with the inoffensive term ‘secularism’ as descriptive of his opinions. How times have changed. In Indian politics, secularism means more things than you can shake a stick at. And all far from innocuous.

If you’re a Congress man: secularism is alienating the majority and isolating the minorities by reducing the latter to the status of ‘vote banks’ in your attempts to ensure nobody feels alienated. Quite.

If you’re a ‘Hindutva’ man: secularism is ‘pseudo’. Happily for you, it’s a word the bulk of your audience doesn’t quite comprehend, but is glad to lap up—consumed as they are by their insecurities—oblivious that by doing so, they reject the only school of thought that can ensure their security. Quite.

If you’re a Third Front man: secularism is somebody else’s election plank. You will have no truck with it (or them) in the run-up to the polls but as soon as the ballot is done and dusted with, will proceed to swiftly align yourself with ‘secular forces’ in a play for power. Quite.

If you’re a thinking man: secularism is a pipe dream in the world’s largest secular democracy. You are frustrated by the way it is routinely abused in a country already cloven by religion and politics. Naturally, you take the high ground and detach yourself from the sorry state of affairs, thus ensuring the non-secular continue to run the show. Quite.

If you’re a woman in India: the ruling class has no time for your views on secularism. Quiet.

As is evident from this small talk, secularism means little to the different people who live in this avowedly secular country. It might not be such a bad idea to slow down and understand it properly.