Tracing the masculinity of star power in Hindi cinema 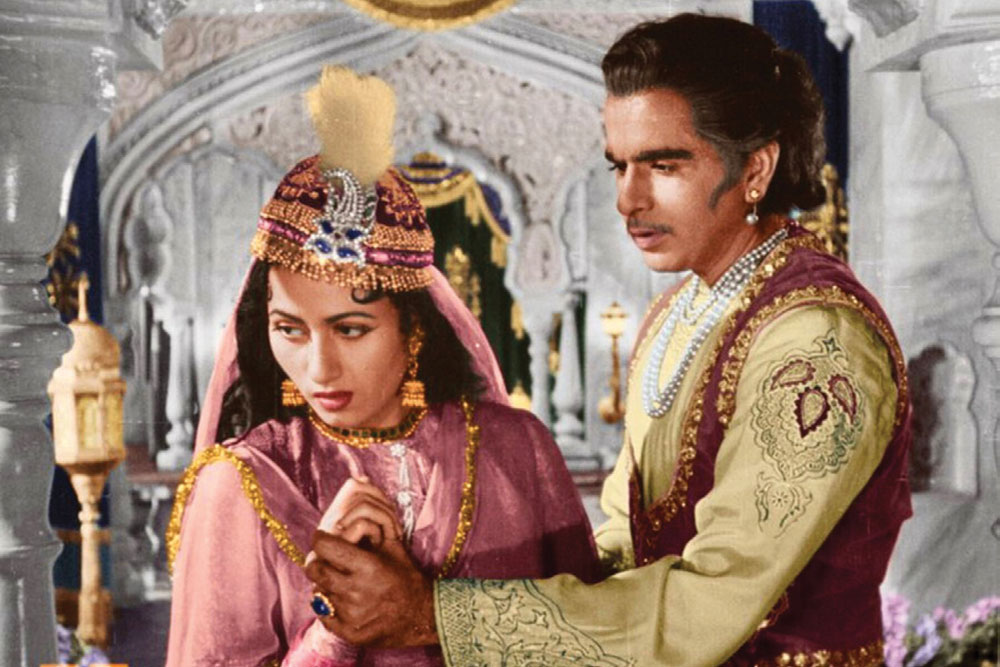 Dilip Kumar and Madhubala in Mughal-e-Azam


ALTHOUGH IT’S A long time since we saw Dilip Kumar on screen, his absence is hard to comprehend, given he is so central to Indian cinema that few people today remember Hindi movies before him.

I met Dilip Sahib after he had stopped acting, almost 25 years year ago. A student and I were in Mumbai when we found a film industry directory and simply rang his number. We panicked when a familiar voice answered the phone. Dilip Sahib was amused and invited us to breakfast. When we asked for his address, he said most people would know his house, as indeed our taxi driver did. We were made welcome like long lost nieces visiting for the first time. Dilip Sahib’s manners were elegant and beguiling. It didn’t take him long to realise I understood at least basic Urdu. He asked me when we left, “Beta, why do you have an English name?”

I met Dilip Sahib only twice more, once for his talk at the British Film Institute. The audience was full of his London fans and when he appeared to flag, Saira Bano got on stage and encouraged him to reminisce further. The other time was when he was one of the chief guests at the launch of my book on Yash Chopra. I feel privileged to have had even these encounters with such an icon of Indian cinema and of India itself.

Dilip Kumar had a unique place as one of the stars who embodied the new state of India. Along with Raj Kapoor and Dev Anand, he was one of the great actors of his day and he starred with almost all of the leading actresses of his time and worked with the great directors.

Guru Dutt wanted Dilip Kumar to play Vijay in his Pyaasa (1957), but although he accepted the role initially, he withdrew. We can only imagine Dilip Kumar as the angry and sorrowful Vijay, an Urdu poet in Calcutta, who rejects the new bourgeoisie who exploited him and his idealism, choosing instead a life with the rejected and the poor. (This is not to detract from Guru Dutt’s magnificent performance in the role.)

Dilip Kumar worked with Bimal Roy who also infused his romances with a political streak, always beautifully acted. The self-destructive Devdas and his unrealised romance with his childhood friend Paro has much of Vijay’s anger without the art, which turned his anger and narcissism outwards as he found redemption in the sex worker who loved him, Vijay’s Gulab and Devdas’ Chandramukhi. Who can forget Dilip Kumar as a professional forestry worker in Madhumati (1958), the only non-feudal character in the film, a ghostly story of reincarnation, where he falls in love with a forest dweller played by Vyjayanthimala.

Dilip Kumar could have made his mark in Raj Kapoor’s romantic comedies, but again we can only imagine how this may have turned out, although seeing the two of them act together in Mehboob’s Andaz (1949), the man-boy played by Raj Kapoor was far less appealing.

Some of Dilip Kumar’s most glorious work was with Mehboob Khan, whether a modern hero in Andaz, a swashbuckling Ruritanian hero in Aan (1952), or a negative hero in the Gothic Amar (1954).

Mehboob rejected the story of a tonga driver, which became BR Chopra’s Naya Daur (1957) with Dilip Kumar as the tonga driver, perhaps a surprising casting choice. Mehboob admitted his mistake in rejecting the script and instead celebrated its success with BR Chopra.

Although Dilip Kumar had several hits in the 1960s, including Gunga Jumna (1961) and Ram Aur Shyam (1967), it is his performance in Mughal-e-Azam (1960) that brought out his greatest acting skills and command of language and dialogue. He romances Anarkali with a tender devotion remembered from the feather scene, even though he and Madhubala had ended their own love story in a famous court case over the outdoors shooting for Naya Daur.

Dilip Kumar’s Pathan heritage is much celebrated, Pathan being the Hindi/Urdu word for Pashtun. There isn’t a great presence of Pathans today in India, although they have played an important role in Indian history with notable figures such as Abdul Ghaffar Khan, the Frontier Gandhi.


It is Dilip Kumar’s performance in Mughal-e-Azam that brought out his greatest acting skills and command of language and dialogue. He romances Anarkali with a tender devotion remembered from the feather scene, even though he and Madhubala had ended their own love story in a famous court case

Like many Pathans, Dilip Kumar’s family sold dried fruits, travelled to India, provisioning the British army. Many Khans claim to be Pathans, and of course Dilip Kumar’s original name, Yusuf Khan, was changed when he was renamed by Devika Rani, not to hide his identity but rather to sound “modern” with a neutral, pan- Indian name. (A reversal of identity was undertaken for religious reasons when AS Dileep Kumar became AR Rahman.)

It’s not surprising that there are several Pathans in the film industry as they are seen to embody ideas of male beauty, being tall and fair, as well as speaking good Urdu. The Kapoors claim to be Pathans, albeit Hindu Pathans, though they are Punjabi Khatris who lived in Peshawar. Other notable figures are Salim Khan and his son Salman Khan, Aamir Khan and family, Feroz and Sanjay Khan.

Pathans feature in several well-known films, notably the two films based on Tagore’s short story, Kabuliwala— Tapan Sinha’s film of 1957 and Hemen Gupta’s of 1961. This story of the migrant Afghan is timely viewing today. Other films were set in Afghanistan, namely Dharmatma (1975), Khuda Gawah (1992)—which became a massive hit in Afghanistan with Amitabh Bachchan and Sridevi playing Afghans—and Kabul Express (2006).

One of the most popular images of the Pathan is in Zanjeer (1973), where Pran plays Sher Khan, the most loyal of all friends who dresses in full costume and dances with handkerchiefs the famous song: ‘Yaari hai iman mera’.

Dilip Kumar always had an elegance deriving from and drawing upon his sense of grace and graciousness. No one remembers him for his body but for his face, the eyes, the smile, the hair and how he used them to enchant. In Naya Daur, when he sings, ‘Udein jab jab zulfein teri’, although it is meant to be about Vyjayanthimala’s beautifully smooth hair, I’m sure I’m not alone in remembering we all remember Dilip Kumar’s hair blowing as he smiled at her. He set the standard for the looks of the Indian hero, and I believe he is not entirely dissimilar to Amitabh Bachchan and very similar indeed to Shah Rukh Khan (SRK).

Pathans may not be a dominant group or feature often in Hindi films today, but I look forward to seeing Shah Rukh Khan in the Yash Raj film Pathan, which is due to release next year. He has taken several roles already as a Pathan, notably, Amjad Ali Khan in the 2000 film Hey Ram (also made in Tamil). In many other roles, he has a Pathan name but no character traits/stereotypical behaviour, including as the hockey player and coach, Kabir Khan, in Chak De! India (2007) and Rizwan Khan who told us emphatically, “My name is Khan and I’m not a terrorist” in My Name Is Khan (2010). He was Tahir Khan in Ae Dil Hai Mushkil (2016) and Jehangir Khan in Dear Zindagi (2016). Shah Rukh played a Gujarati Muslim in Raees (2017), a figure who seems much more familiar today in Mumbai than the Pathan, embodying as Raees (SRK) says in the film, ‘Baniye ka dimaag and miyaan bhai ki daring’. But who knows? Perhaps in the chaos northwest of the Indian border, the figure of the Pathan may be due for a revival.