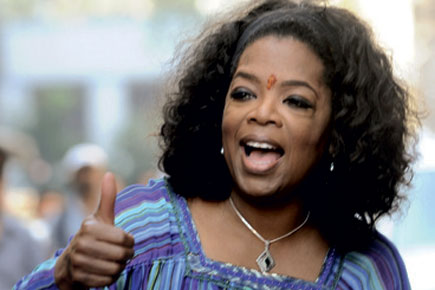 
Oprah Winfrey, American TV show host and entrepreneur, once referred to as ‘the most influential woman in the world’, came to India and immediately got a taste of what makes this country so exciting. She was hosted by the swish set in Mumbai one night and then taken to the poorest part of town, Dharavi, the next day. Designer to film stars, Tarun Tahiliani, created a sari for her, and Aishwarya, the Bachchan bahu, helped her drape it on. She even got Big B to drive her personally around town. Policemen crashed the party for her at Parmeshwar Godrej’s house thrice as neighbours complained of loud music. Ram Gopal Varma tweeted: ‘Is Oprah Winfrey a fish? Just asking becos the name rhymes with pomfret… Pomfray Winfrey… Pomfrey Winfrey.’

Often cited as an example of the ideal rags-to-riches story, Oprah beat an underprivileged and dysfunctional childhood to become the richest woman in the world. She was raised on a farm by her grandmother till she was six, and then moved to Milwaukee to live with her mother, where she was repeatedly molested by male relatives and even a visitor. She then moved with her father, who was a strict disciplinarian and made her write a book report a week—surely an inspiration for the book club she later introduced on her show, The Oprah Winfrey Show.

She was also crowned Miss Tennessee at age 17—a far cry from her later years when she was often criticised for her weight. By the time America fell in love with Oprah Winfrey the talk show host, she had made an impact with her poignant portrayal of Sofia in Steven Spielberg’s The Color Purple.

Her own show emphasises spiritual values, healthy living and self-help. She gave away homes and expensive vacations to people who had never dreamt of a better life. Though her show ended after 5,000 broadcasts, she is now working on a new show that will see her travelling the world interviewing celebrities.