He said she “is such a nightmare, she looks like a fucking fairground stripper” 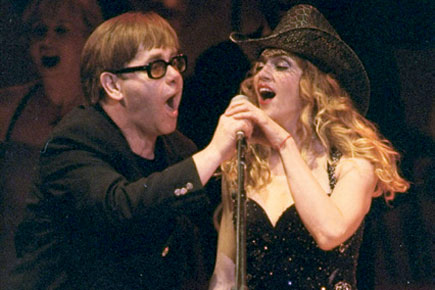 He said she “is such a nightmare, she looks like a fucking fairground stripper”


When there’s a spat between two celebrities, it’s time to bring the popcorn out and watch sumptuous insults fly back and forth. Madonna and Elton John, two of music’s biggest names, have been involved in a pretty nasty fight since 2004. And mostly, it’s been John doing most of the trash-talking.

At the 2004 Q Awards, John said that Madonna lip-synced. “Sorry about that, but I think everyone who lip-syncs on stage in public when you pay like 75 quid to see them should be shot. Thank you very much. That’s me off her Christmas card list, but do I give a toss? No.”

In a recent interview, Sir Elton was even more caustic. He said that Madonna’s “career is over”, and that she “is such a nightmare, she looks like a fucking fairground stripper”. John may have also been peeved at Madonna because she hasn’t been too kind to Lady Gaga, who is godmother to his son Zachary.

A few days ago, they spoiled some of the fun by kissing and making up. They bumped into each other at the restaurant Petite Maison in Nice. Madonna was eating there a few hours before her concert. John was eating there because, well, everyone needs to eat dinner. Reports say John, who stays nearby, walked over to Madonna’s table before leaving and they were spotted laughing and hugging. In response, Madonna dedicated her song Masterpiece to John in the concert. “I know he’s a big fan of it,” the Material Granny said. “And I know he’s a big fan of mine. And you know? I forgive him. Gotta start somewhere.”

Except for one small detail. Masterpiece defeated John’s Hello Hello from Gnomeo & Juliet for Best Original Song at the Golden Globe awards. The party isn’t over yet.