What are we supposed to make of India’s number one test cricket team ranking? 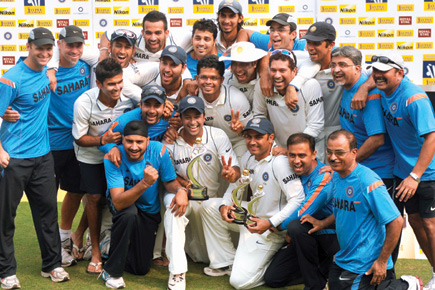 What are we supposed to make of India’s number one test cricket team ranking?


In August 2009, as per the ICC Test Rankings, India was the fourth-best team in the world. Back then, the race for ‘numero uno’ was a two-horse one between South Africa and Australia. Four months later, India is on top. Let’s see what the top four have been up to the past four months.

Since August 2009, Sri Lanka has trounced Pakistan and New Zealand by identical 2-0 margins in Tests in Sri Lanka. Meanwhile, neither South Africa nor Australia has played any Test cricket. Before the current series between India and Sri Lanka, India was in third place, Sri Lanka second and Australia fourth. Right now, what India has done is beaten a side that rarely, if ever, tours well. It has not beaten Australia or South Africa.

Some will argue, how can we be better than two teams we haven’t played in recent times? Are we really better than these teams? One of these teams beat us in the ODIs before this Test series. How does the ICC work these things out?

If you look for an explanation on  Wikipedia, you will be… well, stumped. For example: ‘If the difference in points between the teams at the start of the series is less than 40 points, they take a ‘team’s own series result points multiplied by 50 points more than the opponent’s ranking points’ plus ‘the opponent’s series result multiplied by 50 points less than the opponent’s ranking points’. It’s best not to get sucked into it.
What, then, are we supposed to make of this number one ranking? After all, now that the Indian team is on top, what does the rest of India do? A good thing to do would be to hold back the celebrations. As I write this piece, the numbers look so (points): India (124), South Africa (122), Australia (116) and Sri Lanka (115). And number one is far from secure.