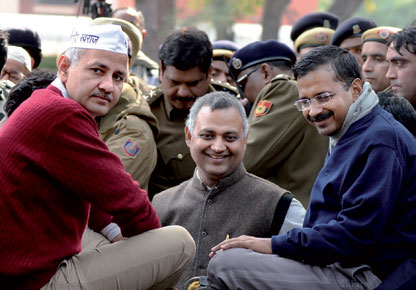 When Arvind Kejriwal released the Aam Aadmi Party (AAP) manifesto before Delhi’s election, he said that one of its key goals would be to attain full statehood for Delhi. To understand why statehood is important, one should recall the Khirki Extension episode in New Delhi under the first AAP government. Then law minister Somnath Bharti had accused Africans in the area of selling narcotics. Later, Arvind Kejriwal, too, led a protest against the Delhi Police as they had refused to take action. Usually, elected ministers just have to order the police to move on such an issue. But in Delhi, the police are not under them.

The Delhi government currently has the power to govern and make laws on all subjects except three: police, land and public order. Statehood would allow the Delhi government to borrow freely from the Centre to build a world class city. The government would also control all Delhi Development Authority land and housing policies. It would fix police accountability and synchronise the utilisation of resources for health and education.

With statehood, the Municipal Corporation of Delhi would also be accountable to the state government. Currently there are some 60 matters relating to municipal governance that cannot be addressed without the approval of the Union Government. The Delhi government may pass an amendment, but for it to become law it would have to get the approval of not only the Lieutenant Governor and President but also union ministries of Urban Development and Home Affairs.

Ironically, in 2003, the NDA Government had tabled Delhi’s Statehood Bill in Parliament, but the Government fell and the bill was never passed. The AAP government will keep raising the pitch on statehood. Whether the Centre will relent, though, is anybody’s guess.