All said and done, various kinds of carrom are played in more than 50 countries around the world. 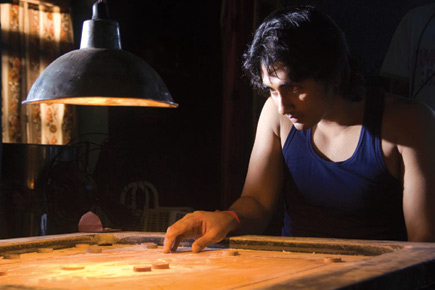 All said and done, various kinds of carrom are played in more than 50 countries around the world.


In the good old days, carrom, chai and chips made for great bedfellows. Nowadays, not as many people play carrom. Chips and chai, though, still reign supreme. Still, it’s not like carrom is dead. In fact, chances are, it’ll get a bit of a fillip in the days to come on the back of the new Hindi film Striker, starring the boyish-looking Siddharth of Rang De Basanti and Ayutha Ezhuthu fame.

Carrom (or Carroms) is a family of tabletop games similar to billiards, pool and snooker. A family that plays carrom together sticks together, one might say. (It is, after all, a game up to four people can play.) In other parts of the world, carrom is also known as carrum, karam, fatta (Punjabi) or the rather crass-sounding ‘finger billiards’. The game is most popular in Bangladesh, India and Pakistan.

There’s a little more to carrom, though, than the version of the game played in South Asia. Americans, expectedly, play a slightly different kind of carrom using a lighter striker, smaller carrom-men, miniature cue sticks and pockets built into the corners of the board. This makes scoring easier.

Novuss (or koroona) is played in Latvia and Estonia with cue sticks much closer in size to the ones used in pool. And it’s played standing. Filipinos, on the other hand (taking a cue, most likely, from their American past) play something called karambola. It’s also a lot like novuss, save for the playing table, which might be rotated for the benefit of the players and in keeping with the rules of the game.

Down Under, Australian for carrom is puckpool. It came into being in the 1990s and is like the Indian carrom, in that it is played using one’s hands (and not a cue). But that’s not all. ‘Australian carrom’ has also adopted many rules from ‘blackball’, a standardised version of the bar-game, 8-ball pool. The name puckpool is derived from the alternative word for striker (puck) and blackball.

All said and done, various kinds of carrom are played in more than 50 countries around the world. Considering it’s affordable, engrossing and has an extremely gentle learning curve, it’s not hard to fathom why. What strikes me as odd, is that it’s not more popular than, say, a more arcane game like chess.