Kishoreganj, Dhaka: The Death of Joy

Kishoreganj, Dhaka and the rite of memory in the age of terror 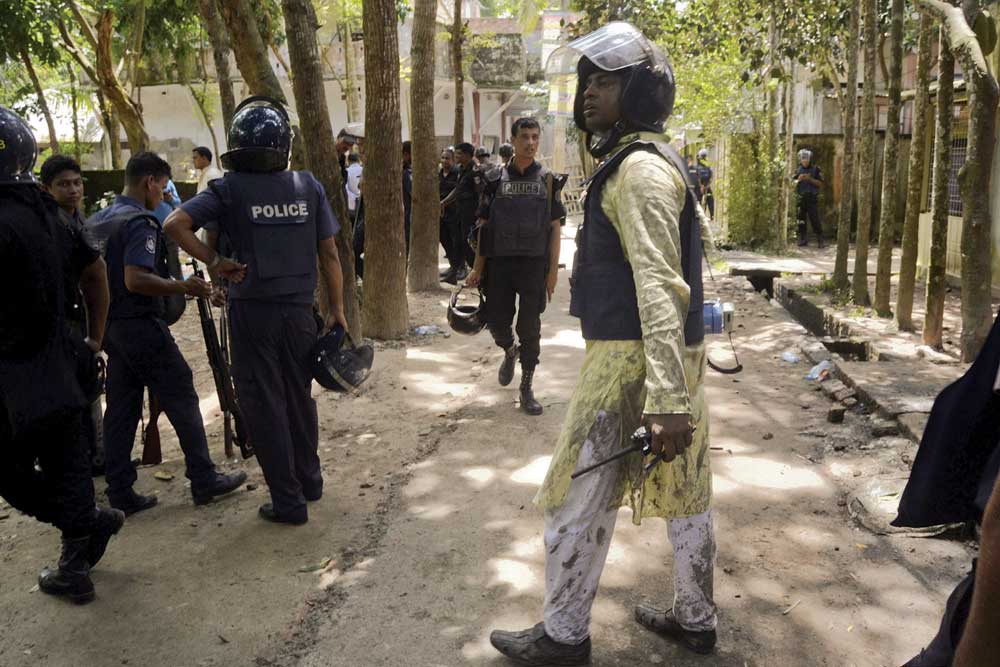 WHEN PEOPLE ASK me ‘What is your favourite city?’ I typically mention two: Calcutta and Boston. Calcutta is where I grew up and had all my education, and it’s where I have lived all my life. Boston was my home abroad for a couple of years in the end-1950s as a young wife and mother; my husband Sisir took advanced training in paediatrics there and I accompanied him to what seemed then to be a very faraway land. There I had my first experience of a foreign country and an alien culture. I found the United States of that time welcoming, on the whole—this was before the complacency of its society was upended by the civil rights movement, the Vietnam War, and the rise of feminism.

But there was a small town in eastern Bengal, Kishoreganj, which was embedded in my consciousness since childhood. My uncle Nirad C Chaudhuri and my father, his older brother Charu C Chaudhuri, talked incessantly about Kishoreganj, where they spent their childhood and went to school.

From their memories, Kishoreganj is etched in my mind as a place of culture and liberal ideas. Uncle Nirad, my father and their siblings staged home productions of Tagore’s dramas there when they were growing up. They also performed Shakespeare’s plays. The classics they read at home included Homer and Milton. All this in a small and remote east Bengal town. They also read the Bengali works of Bankim Chandra Chattopadhyay and those of Michael Madhusudan Dutt, the pioneer of modern Bengali poetry and literature. And of course, the rising star Rabindranath Tagore. My grandmother gathered all her children together every evening; she played the harmonium and they sang Tagore’s songs in unison.

I never heard from my father or my uncle of any communal tension in Kishoreganj in the early decades of the 20th century. Rather, they remembered looking forward to Eid. They looked on in curiosity as local Muslims—among them little boys of their own age—went for the Eid namaaz dressed in new clothes. Uncle Nirad has written in his autobiography how serious they looked as they went, more solemn even than ‘the baby Christs of high Renaissance painting in Italy’. Afterwards everyone, young and old, looked ‘very happy as if they had all their desires fulfilled’. Every autumn, Durga Puja too was a festive occasion for all in Kishoreganj, Hindus and Muslims alike.

At melas (fairs) and haats (markets) in town, both communities gathered and mingled. The local maulavis sometimes brought their old, worn copies of the Qur’an to be re-bound—by Hindus. There was a stall for violins and another for drums, where the mridanga took pride of place. Everyone enjoyed the music.

My uncle Nirad C Chaudhuri and my father, his brother Charu C Chaudhuri, talked incessantly about Kishoreganj where they spent their childhood. It is etched in my mind as a place of culture

My father’s generation grew up in Bengal in idyllic harmony. The first communal incident in Kishoreganj occurred in 1930. The context was the world-wide Great Depression. The Kishoreganj ‘riot’ of that year was primarily an anti-moneylender revolt, a local manifestation of a global crisis. Unlike Noakhali and Tipperah on the eve of the birth of Pakistan in 1946, it was not about massive violence directed at the Hindu minority.

I was shocked and saddened by the terrorist attack on the Eid congregation in Kishoreganj earlier this month. I was just trying to get over the horrible news of the atrocity in Dhaka’s Gulshan area. As with Kishoreganj, I have a soft corner for Dhaka in my heart. My mother had her only child, me, in her parents’ home in Dhaka’s Lakshmi Bazaar neighbourhood. My passport still says ‘Birthplace: Dhaka, Undivided India’. My maternal grandfather, Lalit Mohan Roy, was a nationalist zamindar, a social reformer particularly devoted to women’s rights and emancipation, and a patriot imprisoned after being convicted for helping armed Bengali freedom fighters in the ‘Dhaka Conspiracy Case’, in which his defence lawyer was Deshbandhu Chittaranjan Das, the mentor in politics of both Subhas Chandra Bose and his elder brother, my father-in-law Sarat Chandra Bose. After his death, I accompanied my newly widowed grandmother to his country estate in Narsingdi. I was just nine then. But I still remember poor Muslim peasants, his prajaa, weeping bitterly over the demise of their feudal guardian.

Today, in my eighties, I feel the world of my childhood is disintegrating. Dhaka, Istanbul, Nice… one dreads to think where the next calamity might occur.

Disturbed and restless, I pulled out Uncle Nirad’s autobiography from the bookshelf—the American (1951) edition of The Autobiography of an Unknown Indian he gifted me. Its controversial dedication to the memory of the British Empire is well-known. I opened the book and read the words he had written for me on the title page in his own hand. I was then just into my twenties and a graduate student of English at Calcutta University. He alluded to his life journey, which began in an obscure town in east Bengal where Homer, Milton and Shakespeare merged seamlessly with Michael Madhusudan, Bankim and Tagore, and where Durga Puja and Eid were occasions of joy for all:

This is only a milestone on a long road, already trodden by two generations and perhaps to be trodden by many more. But while your grandparents and parents have trudged in faith alone, may you walk in joy and hope.

In an age of terror, we must not give up on hope. And certainly not on joy, the elixir of life.

Krishna Bose
Krishna Bose, an academic and writer, is a former member of the Lok Sabha, elected thrice from Greater Kolkata’s Jadavpur constituency