Gentle On My Curves

Among the many Englishes 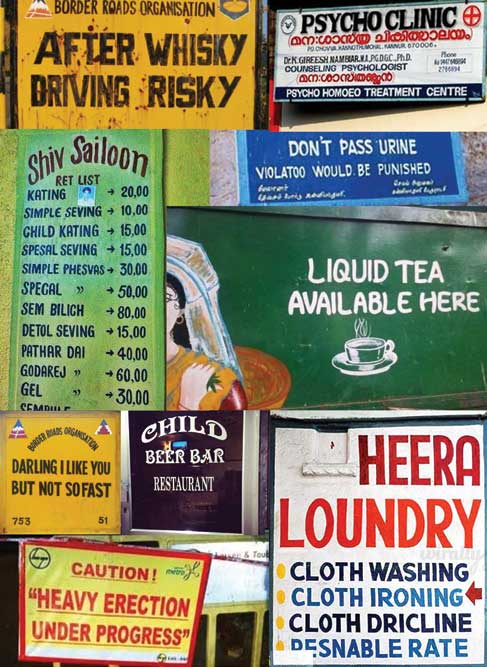 
AS A JOURNALIST one’s business is language. The bolts of our trade are words, and grammar provides the nuts. String them together we create a sentence, and convey meaning. For writers the mechanics of writing is equal parts thrilling and terrifying. You want to be precise, you wish to be exact, you try to carve out a cadence of your own, and all the time you are left wondering, is this enough?

As an editor, you heed the voice of the writer, but you also apply to it a set of ‘rules’. Are the subject and verb in agreement, is the sentence complete or is it a fragment, has it fallen prey to a dangling modifier? We follow these rules because they aid the comprehension of a reader. Without it the reader would lose the thread of the sentence, and the meaning will unspool. We write to be read, we speak to be heard, we communicate because we wish to be understood. And since all communication works on the premise of at least two parties partaking in it, we fall back on a common set of rules to ensure that both are, quite literally, on the same page.
Even while we must be rule-bound to be understood, the wonder of language lies in its infinite multitudes. Language is primarily engaged with making meaning, but the freest of all languages is that of gibberish. It is a language which in its non-sense makes an impact; whether it is Toba Tek Singh in Manto’s Partition short story (of the same name) who speaks a tongue that no one can understand or Jabberwocky , the nonsense poem written by Lewis Carroll in Alice in Wonderland. In both cases the non-sense gives free reign to readers’ imagination, as the reader has no information that can be easily comprehended and unpacked. As Albert Einstein once said, ‘Imagination is more important than knowledge. For knowledge is limited to all we now know and understand, while imagination embraces the entire world, and all there ever will be to know and understand.’ Gibberish or words that we do not understand immediately force us to imagine different realms and dream new dreams. It is the freest form of language, and must be resorted to when our given vocabulary falls short, which it often does, when it comes to shape-shifting events like Partition, for example.

While gibberish lies at one end of the language spectrum, the rest of our time, we try to speak and write in a way that will be understood by others. While we are slave to certain guidelines and procedures, we can find freedom both in our mother tongues, a language that we know from the heart, and the languages that we learn and master over time. In India, English for the vast majority, is the language that we learn outside our homes, while a handful of us learn it as our first language.
The imposition of English in India carries its own messy and complex baggage. But what is wonderful is that in India there are so many Englishes. While these numerous Englishes succumb to common rules and regulations, their sheer variety proves the freedom that can be found in language. There is one English which can, perhaps, be identified as the Shashi Tharoor School of English. It is an academic and scholarly English whose roots can be traced back to pedigree and education. It is an English that takes pride in using obscure and multi-syllable words. It is an English which has a better and firmer grasp on vocabulary and grammar than the many millions. It is an English of the pedestal, and not the people. Here the language itself is a thing of beauty, but it is a language that sets the user apart from listeners.


There is one English which can, perhaps, be identified as the Shashi Tharoor School of English. The other English is that of authors like Chetan Bhagat and Anuja Chauhan who succeed in creating a milieu. Here the language imbibes the smells, sights and sounds of the neighbourhood

The other English is that of authors like Chetan Bhagat and Anuja Chauhan who succeed in creating a milieu and mahaul. Theirs is the English that one can hear in homes and on the streets of our cities. Here the language imbibes the smells, sights and sounds of the neighbourhood. It is an argot that is context-heavy, and specific to its speakers and listeners. In Those Pricey Thakur Girls Chauhan creates the world of Justice Laxmi Narayan Thakur (retd) who lives in Hailey Road, Delhi, with his five ‘delectable’ daughters. As his daughter heads out for a job interview, the Judge beams, ‘Dabbu-ka-debut!’ and the mother coos, ‘All the best, beta.’ Watching the car reverse, the guard adds, ‘Traffic is being block.’ These are dialogues that we are all familiar with, they draw from the here and there, and become personal and unique to the speaker and listener. It is an English that is not subservient to syntax and grammar, but it makes meaning with precision, and speaks to the heart, from the heart.

The third kind of English that one can hear in India is that of the recent learner. And while it is easy to mock grammatical errors and malapropisms, what these mistakes tell us is that the speaker knows another language, and that she is making an effort to pick up a new skill. India’s highways often throw up signboards that are inadvertently witty. While ‘Child Beer’ is of course the most well-known one, others follow close behind. In signs like ‘Follow Traffic Rules and Avoid Blood Pools’ or ‘After Whisky Driving Risky’ or ‘Be Soft on my Curves’ one sees how knowledge of the language can lend itself to playfulness. With a language one does not always need to be an expert to create unexpected and delightful results.

India’s highways often throw up signboards that are inadvertently witty. ‘Child Beer’ is of course the most well-known. In signs like ‘After Whisky Driving Risky’ or ‘Be Soft on my Curves’ one sees how knowledge of the language can lend itself to playfulness

WHILE THERE are many Englishes, we also know that English still flaunts a universal position of power and privilege, it alone allows access into certain worlds and corridors. It is still the language of the internet, even as Mandarin and Spanish rapidly catch up. Just recently (August 5th) , and article in The Guardian posed the question, ‘is English destroying the world’s sexiest language’? The French Minister of Culture, Franck Riester, had announced his plan to compel advertisers to stick to French on digital platforms. But how is that possible when not just products, but even emotions are often framed only in English? For example, let’s look at the modern lexicon of dating and romance, the words that millennials use, and which even the French have picked up are English words. Whether it is ‘benching’ or ‘bread crumbing’ or FBO (Facebook Official) or the dreaded ‘slow fade’, where the partner steadily disappears into the sunset.

It is useful to examine the English of the internet and social media as it reflects the zeitgeist of our times. The internet has proven that there is no ‘purity’ of language, and while we’ve always known this, since we don’t speak today like Chaucer and Tagore did in their day, we can now see the changes play out in front of us. In Because Internet: Understanding the New Rules of Language (2019), Gretchen McCulloch writes how ‘Internet writing is a distinct genre with its own goals, and to accomplish those goals successfully requires subtly tuned awareness of the full spectrum of language.’ McCulloch, an ‘internet linguist’ who analyses ‘the language of the internet for the people of the internet’, proves that the language of the net is not an inferior version of the language of our books and newspapers, instead it has become the lingua franca of millions of online users. It is the ‘boundless creativity’ of internet language that fascinates and intrigues her. The internet and mobile phones have made writers of us all. And has created its own kind of writing. McCulloch writes with eloquence, ‘Language is the ultimate participatory democracy. To put it in technological terms, language is humanity’s most spectacular open source project.’ In the online world one can see the creation of language in real time, the multiplier effect here allows anyone to become an innovator, a creator, a trendsetter, a meme maker, and a hashtag pioneer.

It is useful to examine the English of the internet and social media as it reflects the zeitgeist of our times. The internet has proven that there is no ‘purity’ of language, and while we’ve always known this, we can now see the changes play out in front of us

The language of social media is a more informal one, as it is generally aimed at ‘friends’ or ‘followers’, but over time one can map how this informality can be found in mainstream print too, whether it is ‘i’ for ‘I’ or the sudden inclusion of ‘lol’ or ‘tbt’ in writing. These changes can be seen as laziness or subversion, but for others like McCulloch, it is a way of ‘indicating attitude’.

The best kind of writing, the hardest to practise and teach, is a writing where the ‘voice’ of the writer can be heard. In online writing, the voice of the writer becomes apparent early on, as internet language embodies our speech patterns in a way that other writing does not. In many ways online writing mimics speech and for that very reason it frees language from the shackles of officialese and bureaucratese. This freeing, of course, has pros and cons. One only needs to look at Twitter to wonder whether our social politeness is an absolute scam. In these contentious times, even a Tweet which simply states the news is greeted by hate, vitriol and even threats. In the online world emotion and belief replace all niceties and subtleties. The Twitter user’s only shield and weapon is language, and this can be wielded with unflinching force as there are no real repercussions.

Language can and does cause hurt and pain. It can ruin, just as easily as it can build. But the wonder of language is that with a definite number of nuts and bolts, it can, and does create an infinite number of worlds and possibilities.