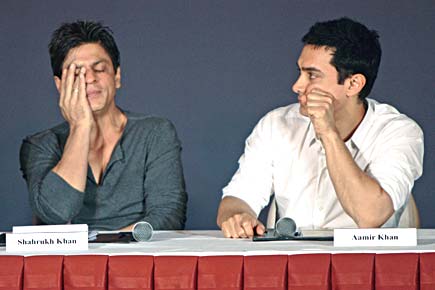 The SRK-Aamir feud has been profitably staged over several months in full public view.


The SRK-Aamir feud has been profitably staged over several months in full public view.

Exhibit A: Aamir Khan (on his blog): “Well Shah Rukh is once again begging for my attention, so let me get back to him. He is smelling too much, I think he needs a bath.”
Exhibit B: Shah Rukh Khan on Karan Johar’s show:“[If I woke up one morning and realised I had turned into Aamir…] I would tell the world that Shah Rukh is the better actor.”
Surely we deserved a less juvenile exchange? Perhaps, a little more wit (e.g.: Naomi Campbell to Mrs Beckham: “Why do they call you, Posh?”), and a little less posturing (e.g.: Posh to Campbell: “A complete cow”). An unexpected turn of phrase, or even a pun, leave alone a genuinely funny line.
And here’s what we have to settle for. Aamir: “Shah Rukh loses his sense of humour when he talks about me.” Really. This almost sounds like a whine.
And you know what’s really depressing? If these two can’t do it, no one can. Salman Khan? He sulks (or hits). Amitabh Bachchan philosophises on his blog (he needs a good editor). Saif Ali Khan seems incapable of humour without a scriptwriter. (After almost running over a pedestrian, his rage at the media could only elicit the view that journalists were “monkeys”. The comment was carried by a tabloid beside a still of Saif jumping in the air.)
In comparison, check out Jennifer Lopez and Gwyneth Paltrow. “I don’t remember anything she was in. Some people get hot by association. I heard more about her and Brad Pitt than I ever heard about her work,” JLo said about Paltrow.
Paltrow’s reply was short, indirect, and damaging. She merely pointed out that Ben Affleck’s ideal woman was a stripper. And Lopez and Affleck were a couple at the time.
Mohammad Ali said of Joe Frazier that he was an “Uncle Tom” (connoting subservience to whites). Frazier later responded he’d have liked “to rumble with that sucker again—beat him up piece by piece and mail him back to Jesus”. He also said that when he saw Ali light the Olympic flame, if he “had the chance, I would have pushed him in”.
And here we are, left with this half-hearted pillow fight. Is this really as good as it gets?
But at least, it was better than nothing. Better than the ‘I-have-great-respect-for-his-work’ quotes. We saw two successful 40-year-olds talk before thinking. Shah Rukh hinted his wife told him to stop. Thankfully, he didn’t. For a while there was real, and rare, entertainment.
There’s hope yet. Both are producers, so the coming together was necessary. Once this has passed, there will be factions, awards to buy, awards to miss, and acting methods to ridicule. Watch this space.