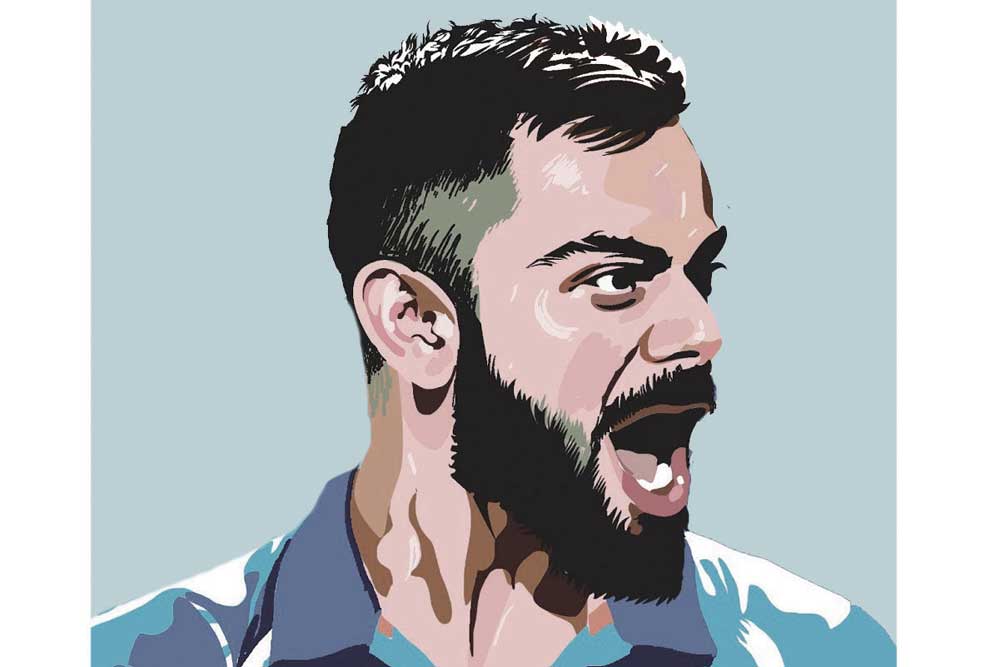 SPORTS WRITERS WHO had the privilege of covering Indian cricket in the 90s often reminisce about the only pitfall of reporting on Sachin Tendulkar. Writing on his genius was first a breath of fresh air, until Tendulkar’s consistency made describing it a weekly headache. “How do we say what we had said only last week, but differently?” One generation on, Virat Kohli’s portentous career has found more victims than just dumbstruck writers; in this hyperconnected world, Kohli’s 27 million Twitter followers and the wider cricket blogosphere are left more amazed than articulate at their keyboards.

On October 24th in Visakhapatnam, Kohli struck yet another ODI hundred. It was his second century in four days. Fifth of the calendar year in 11 matches, where he averages 150 runs a game. And this is Kohli’s run in just 50-over cricket. During his latest hundred in Visakhapatnam, his 37th one-day ton (as many as Sourav Ganguly and Virender Sehwag put together), Kohli also brought up his 10,000th ODI run. In the 10th year of his international career. He is not yet 30 years of age. His scope is, seemingly and mathematically, greater than his hero, Tendulkar’s.

When Kohli was 13 in 2001, the ceiling to human possibilities in one-day cricket was set by Tendulkar after he reached the then-unprecedented landmark of 10,000 runs. Many men have gotten there between then and now, but none quite as quickly as Tendulkar had, in 259 innings. Until Kohli breezed past that record on 24th October, that is, in 205 innings. To understand how significant the difference in attempts is, consider this: in his last 54 innings, Kohli has scored more than 3,600 runs, or a third of his career total.

Today, Kohli’s aura shares its luminescence with Tendulkar’s, precisely because no one expected those unattainable records to fall so quickly. And not the least to Kohli, who didn’t show the same precocity in his teens as the great man. But what he lacked in talent, Kohli made up for in his determination to prove the naysayers wrong. It then makes sense that he once celebrated his hundreds by frothing expletives. In Visakhapatnam, he pursed his lips, blinked his fingers and pointed at his bat, as if to say that now his willow does the talking.

By the time Tendulkar stopped playing in coloured clothing in 2012, he had raised the ceiling he built by a few floors. But we should’ve seen it coming. In the match where Tendulkar struck the last of his 18,426 runs, Kohli, poetically, notched his highest ODI score of 183. Today, Kohli averages a ludicrous 59.62 in one-day cricket. Tendulkar retired with an average of 44.83. And, at the age of 29, Kohli is just 12 hundreds away from what Tendulkar left the game with at the age of 39.

Kohli’s incredible feats are built on a foundation of belief and basics. Keeping it simple helps with maintenance and upkeep. Unlike when Tendulkar was of a similar age, Kohli isn’t a daredevil with his strokeplay. Rather, his invincibility lies in keeping it dull. Every time Kohli walks out to bat, he does so with the promise that he’s going to try his best to not get out. Easier thought than done. To achieve this, not get dismissed, one has to hone his instincts to not react in certain ways, however inviting the temptation may be. Kohli doesn’t cut the ball. Kohli doesn’t sweep. Kohli doesn’t play the ramp shot. Kohli doesn’t hook.

The list of Kohli’s mental landmines is endless. Yet, he scores runs. Big runs, by playing the percentages, ball after tiring ball. To quarantine one’s mind to play the way Kohli has, every day, match in and match out, year after long year, is not for everyone. A lesser man would’ve given in to his gut. Or gone insane. Not Kohli. That self-imposed quarantine has now been home to him—and his collection of records—for over 10 years.