The Sound of Ancient Music 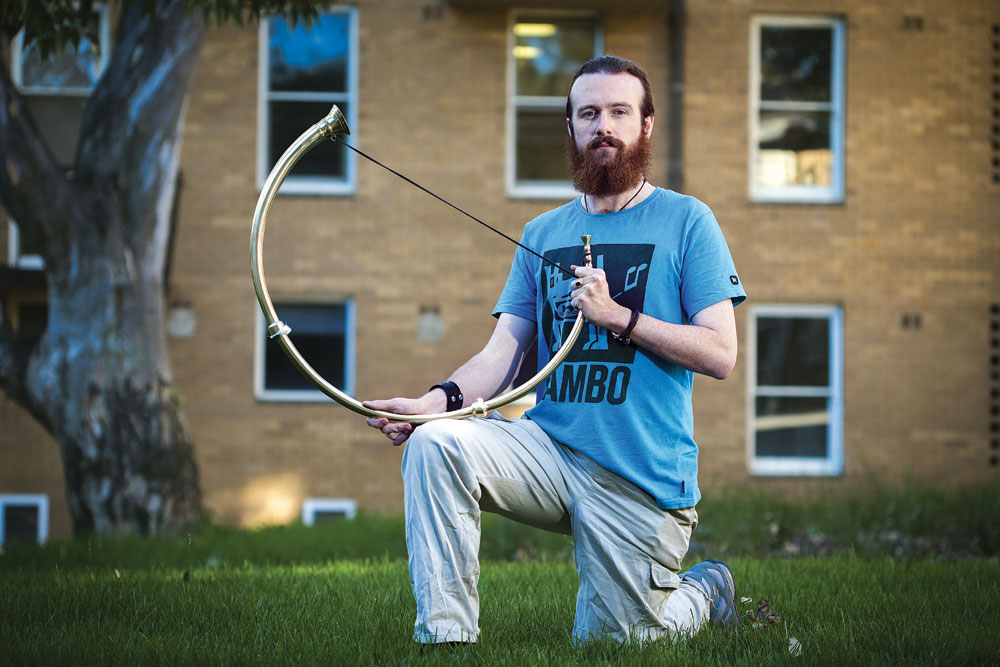 WHEN RESEARCHERS discovered relics of musical horns from the Iron Age in Europe, the overriding consensus was that these were simple musical instruments produced by a primitive culture. Some argued that these weren’t even musical instruments. They were simply tools used to sound an alarm or make noise, perhaps during a war. The carnyx, for instance, a wind instrument with a boar, serpent or some other animal head, is seen as something designed for warfare, to either intimidate opponents or egg troops on.

Such horn instruments and their sounds are, after all, absent from contemporary Western music. Billy Ó Foghlú, a PhD student at The Australian National University who has been studying prehistoric and contemporary horn types in Europe, explains, “From a traditional ‘Western’ musical perspective, all of these instruments would seem confusing: for example, many horns have been discovered together in groups, but they would be all slightly out of tune from one another. Most of these instruments would exhibit all the hallmarks of extensive curation and use, but musicologically, they would exhibit (what is wrongly interpreted) as poor musical ability. So a horn might only be capable of three pitches, or the tones would sound harsh or dissonant.” But what if, Ó Foghlú argues, that these supposedly crude and primitive instruments were actually part of a rich musical culture in prehistoric Europe? And the clues to that prehistoric past are present in the music of modern-day Asia, at least; more specifically, in Kerala.

Ó Foghlú has been studying prehistoric European music, including Ireland’s Iron Age and Late Bronze Age horn types, for several years now. He’s been particularly fascinated with the musical landscape in India and its neighbourhood, chiefly the wealth of horn instruments. In 2001, a scientific paper, Fraser Hunter’s The Carnyx in Iron Age Europe, which was a review of all the materials associated with this ancient horn type, mentioned that an engraving at the Sanchi Stupa in Madhya Pradesh—at least 2,000 years old—that depicts musicians playing various indigenous instruments has a couple of individuals using what appear to be animal-headed carnyces. In 2001, no complete carnyx had ever been unearthed.

In 2004, archaeologists in France discovered complete carnyces for the first time, seven of them. The discovery also revealed the posture these early European musicians would have to adopt to the play the carnyx. And, as Ó Foghlú realised, the posture was exactly the same as the one depicted in the Sanchi Stupa engraving. “This is what really set me off on my research into this specific topic,” he says.

According to Ó Foghlú’s study, which was recently published in the Journal of Indian Ocean Archaeology, Iron Age Ireland’s musical traditions, considered long dead, are still alive and well in Kerala. Modern Indian horn instruments like the kompu from Kerala are almost identical to many European artefacts of that period. This, according to Ó Foghlú, reveals a rich cultural link between the two regions 2,000 years ago. “In Kerala we see a class of musical instrument that does not exist in Europe anymore. Looking at the kompu today, we see a horn that could possibly survive 2,000 years underground due to its metal composition. We also see traces of other instruments made from organic materials that would not have survived and have been lost forever.”

Ó Foghlú says the horn instruments discovered in Europe have been viewed as primitive because contemporary musical traditions of Western music are used as a standard to make aesthetic judgments on music of other cultures. “The reality is that aesthetic judgments on pieces of music are culture dependent. There is no fixed, cross-culturally accepted aesthetic criterion,” he says. “It’s like different languages.” The kompu, he explains, provides a beautiful example of ‘tone clustering’, where dissonance is a desired effect. “Contrary to previous Western suppositions, they are not simple noise makers because they are not used for melody; they are rhythm instruments, a completely alternate class—different tones are used in different combinations in what is highly complex, important and meaningful music.”

He adds that people can delve into surviving systems like the kompu to understand Europe’s prehistoric musical traditions. “I play the kompu now and love it. If people can try to expand their perceptions of different musical systems, they can bring instruments of this type back to life again.”

Ó Foghlú plans to deepen his study of ancient horns by looking at other contemporary instruments in India, apart from Sri Lanka, Nepal, Tibet, Bhutan, and Pakistan. “If I ever won the lotto, I would like to 3D-print as many prehistoric Irish horns as possible,” he says, “and flood the Irish music scene with them, and try to bring as much knowledge back from India as possible to try and breathe new life into some of the now silent music traditions of Europe.”