The Design Flaw of Taj Mahal 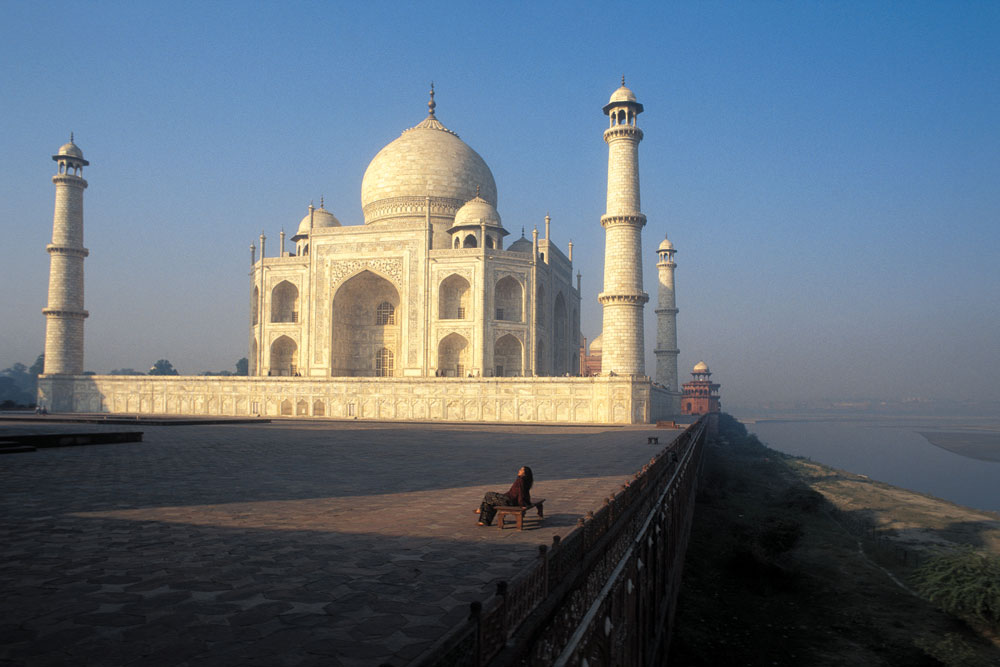 THE TAJ MAHAL means many things to many people. It is a grand evocation of an emperor’s love. It is a symbol of India’s rich history and a masterpiece of world heritage. To Rabindranath Tagore, as his evocative description goes, it is a ‘teardrop on the cheek of time’. But could it be that in all these years, in all our visits to the site and the pictures we have taken along with it, all of us have missed out one niggling detail?

Almost around three decades ago, when Dilip Ahuja, currently a professor at the National Institute of Advanced Studies (NIAS), Bengaluru, visited the Taj Mahal, he began to notice a certain irregularity. Ahuja was then around 30 years old. When he stared at the monument, his eyes moving from the surrounding minarets and the mausoleum’s drum to the large magnificent central dome, Ahuja noticed an asymmetry.

For many years thereafter, when people contested his claim that the Taj Mahal’s central dome was asymmetrical in shape, Ahuja would take a photograph of the monument, carefully cut out its shape from its environment, and then fold the picture along the central axis. “The two edges never coincide, you see,” he says. “This way, I could crudely prove that the dome was asymmetrical.”

Last year, Ahuja, who has an interest in Mughal architecture, delivered a talk about the funerary architecture of the Mughal Dynasty where he mentioned the asymmetry of the monument’s central dome. “Everyone was so interested in it that they goaded me to write about it,” he says. But why hadn’t he before? “I thought people knew about it.”

To write and prove this claim in a scientific journal, Ahuja sought the help of MB Rajani, an assistant professor at NIAS who specialises in satellite imagery. “I thought he was joking,” Rajani claims, recalling the first time Ahuja discussed his project with her. Ahuja once again folded a printed photograph of the dome, like he had done several times before, to convince her. But Rajani decided to test it for herself. She found a digital visual of the Taj Mahal and, using a photo editing software, she carved out one half of dome along the central axis and flipped the image to see if it measures up to the other half. “I was shocked,” she says. “It didn’t match.”

On 25 March 2016, the two researchers published their study on asymmetry of the Taj Mahal’s dome in Current Science. Rajani and Ahuja took several horizontal slices at different heights from the drum (on which the dome sits) and measured the pixels on the right and the left sides. The authors write, ‘The dome at its widest is 33.62 m, 9.24 m above the top of the drum. The offset here is 0.42 m or 1.26%. The maximum horizontal offset is seen at 24.4 m above the drum, where it is close to 5.5%.’

According to the two researchers, it is possible that the asymmetry was deliberate. Islamic craftsmen are known to introduce slight errors in their work in the belief that only Allah can be perfect. However, there are already other small imperfections in the monument. For instance, the base of the chatris are left in red sandstone and not covered with marble. And hence the need to intentionally introduce an error in the dome’s symmetry wouldn’t have been necessary. The likelihood of the deformation not existing at the beginning, but occurring over time, they argue, is slim. To the authors, the most convincing possibility is that it is a construction error. The outer dome was constructed after the inner dome was finished. “Perhaps the builders did not have the benefit of a central plumb line,” Ahuja says. According to Rajani, “The limitations of making precise measurements in those times, coupled with the dome’s size and complex architecture, would have been quite challenging for the builders.”

Since Shah Jahan was renowned for his aesthetic sense and was known to be directly involved in the architectural projects he commissioned, the researchers say it is likely that he was aware of the dome’s defect. “Mughal emperors were known to order the re-construction of buildings they did not like. His first instinct would probably have been to rebuild the dome,” Ahuja says. “But he overlooked it. It’s possible that the artisans convinced him that another attempt wouldn’t improve its shape.”

When Rajani first discovered the asymmetry, she began rummaging through her personal pictures of her many visits to the monument. “I could see it in every picture. I keep asking myself even today—how did I miss this defect all these years?” she says. She reasons that the beauty and immensity of the monument is so imposing that it is difficult for people to notice the dome’s asymmetry.

The researchers also discovered that the finial over the central dome, which is believed to be a bronze replica that was installed in the early 19th century, is slightly tilted.

Does the discovery of the flaw in the dome impact a visitor’s appreciation of the monument? “Not one bit,” Ahuja says. The researcher has visited the site several times after his first discovery. “Even repeated visits do not lessen the feeling of gladness when you see the Taj.”