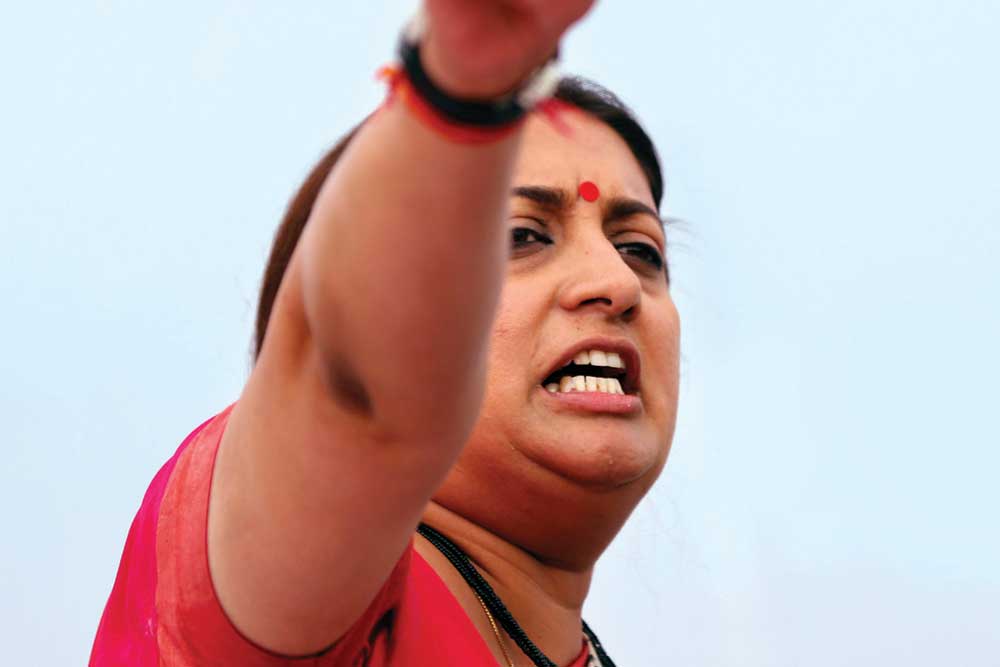 AS THE AMETHI cliffhanger kept the Congress on tenterhooks on the night of May 23rd, BJP’s Smriti Irani tweeted ‘Kaun kehta hai aasman mein suraakh nahi ho sakta (who says there cannot be a hole in the sky?)’. To put it plainly—nothing is impossible, a subtle message that she could defeat Rahul Gandhi in his own turf. Around 300,000 votes were yet to be counted. But, as the gap widened, her rival Gandhi, the two-time MP from Amethi, had conceded defeat, leaving it to Irani to ‘take care’ of the constituency. Then Irani broke her silence on the Amethi outcome.

For the 43-year-old actor-turned-politician, no nail-biting finish could have matched the euphoria of her victory over a Gandhi in the family bastion. In rally after rally, Irani referred to Rahul Gandhi as the ‘laapata sansad (absent MP)’, and projected herself as the ‘didi’ who would be their saviour. Taking on the Gandhis, whom she referred to as ‘naamdaar (dynast)’, she projected herself as their antithesis— an ordinary person from a humble background.

Hers has been a roller-coaster ride— from Tulsi of a popular soap opera to a Cabinet minister with key ministries at 38; from blaming Modi when he was Gujarat chief minister for BJP’s electoral losses in 2004 to becoming one of his most zealous patrons; from contesting a losing battle against Congress’ senior leader Kapil Sibal in Chandni Chowk in 2004 to becoming a giant killer defeating Rahul Gandhi in Amethi.

She has courted controversy right from her educational qualifications to her tenures as Union Minister for Human Resource Development (HRD), and later as Information and Broadcasting Minister. If it did cause any disquiet, Irani masked it in dauntless aplomb, gearing up for her next assignment. She was fielded as BJP’s candidate in Amethi five years ago, ahead of the 2014 Lok Sabha election. An aggressive Irani gave Gandhi a tough fight in 2014, but lost by 107,903 votes (37 per cent), while her rival got 408,651 votes (46 per cent). Her defeat only deepened her resolve. Taking it as one of the biggest opportunities of her political career, she pulled out all the stops to win Amethi, undeterred by the fact that she was fighting decades of allegiance to the Nehru-Gandhi family. It was a seat represented by four of its members in the past. Barring twice (1977-80 and 1998-99), Congress had won Amethi in every election since 1967.

In the past five years, Irani made 35 trips to Amethi, acquainting herself with every party worker and imbibing the central Uttar Pradesh dialect to connect with voters. Talking to Open during her campaign she had said her first impression of the constituency had come as a “shock” to her, seeing the “lack of development”. Irani, who stayed in a two-storeyed house rented for her and her team during the campaign, had cultivated Amethi over the past five years assisting in areas of health, education, women, agriculture and roads, making use of her clout in Delhi.

Irani’s has been one of the biggest victories of this election. It is to be seen what role she gets next. ‘If you can meet with Triumph and Disaster and treat those two impostors just the same,’ wrote English writer Rudyard Kipling in If.

Irani says her entire life has been driven by the principle of that poem. Her meeting with triumph begins now.