Revenge of the Cartoon 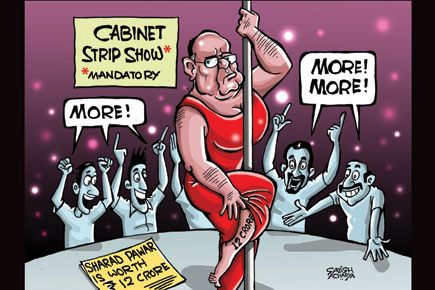 In the face of police action, a cartoonist tries to defend his right to make people smile


MUMBAI ~ When Satish Acharya drew a caricature of Sharad Pawar earlier this month, the cartoons struck back. The piece (reproduced above) captured the widespread disbelief about his declared assets. It was published in Mid-Day, a popular Mumbai tabloid, on 5 September. Acharya then published it on his blog.

Earlier this week, Acharya tweeted that an activist of the Nationalist Congress Party (NCP) had complained about the ‘offending’ cartoon. Significantly, the complaint was specific to Acharya’s blog, not the newspaper that had published it. Acharya ignored it. Abdul Rehman Anjaria, who claimed to be a member of the Jama Masjid Advisory Council, then went to Mumbai Police’s Crime Branch—which reports to an NCP minister.

Acharya soon got a call from the cyber crimes cell, threatening him with stringent legal action if he didn’t take the cartoon off his blog.

“He hadn’t seen the cartoon but was angry about it,” Acharya tells Open over the phone from Mangalore. “He threatened to slap Section 69 of the IT Act against me. He asked me to call him after the cartoon had been taken off. My office asked me to take off the cartoon, which I haven’t. There are so many offending cartoons. Will all of them be taken off?” he asks.

“My freedom as a cartoonist is being infringed upon.”