Nobel for Biographers of Growth 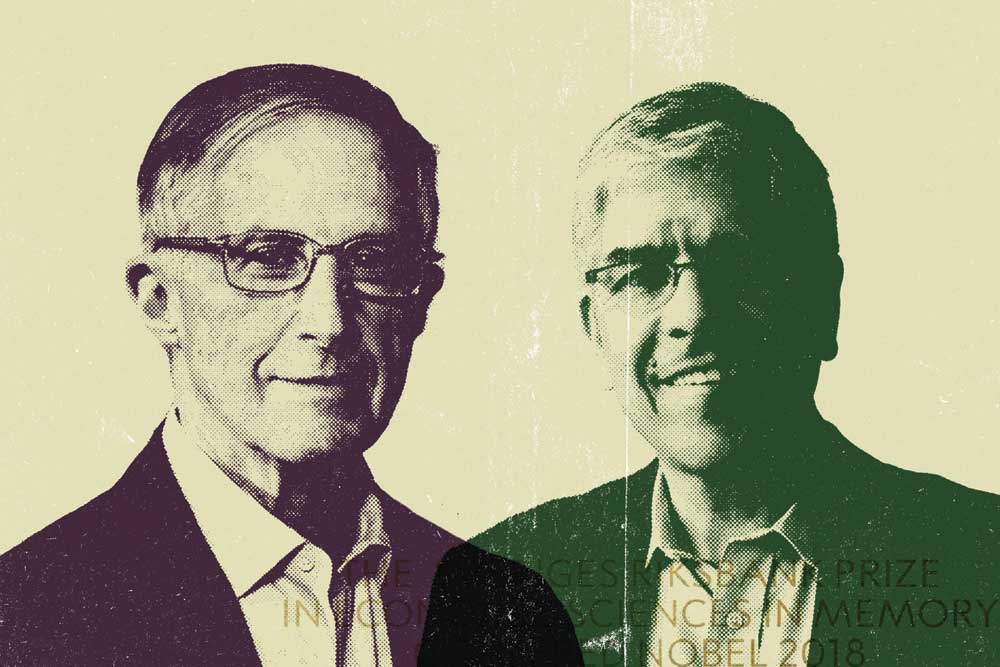 NOBEL PRIZES IN economics celebrate intellectual achievements. These awards are not statements about current affairs or even current problems. But once in a while, the two converge. Awarded this year to two outstanding scholars—William Nordhaus of Yale and Paul Romer of New York University—the prize highlights two pressing problems of our age: the peril of climate change and the uncertain prospects for global growth. Both scholars are pioneers in studying the economics of climate change and output growth.

Nordhaus provided what was one of the earliest ‘integrated models’ that looked at both the physics and economic consequences of climate change. Since then, empirical and theoretical studies on the topic have exploded and now number in the thousands. The subject remains controversial not because the science is faulty, but the message is hard for politicians to digest. Arresting climate change is now almost impossible and the most that one can hope for is arriving at some weak compromise on a target to limit increases in atmospheric temperature. Even that seems a difficult goal.

Romer pioneered what economists call ‘endogenous growth theory’, a subject that recast growth theories to account for the role of ideas. Modern growth theories that were put forward between 1945 and 1955 looked at broad economic variables like savings, investment and technology (which was assumed to be a given, or ‘exogenous’ to these models) and were formulated in an era when data was scarce and comparisons with the past were possible only to a limited extent. Once data was available, these theories could not account for many puzzling features of modern growth. For example, it was predicted that countries would ‘converge’ with one another in terms of growth, something that has not been seen in reality. In the end, ideas play a big role in fostering invention and innovation. That seems simple enough, but the economics of it is complicated and Romer had a big hand in reformulating growth theories.

The prize committee has clearly spelt out the work for which it has honoured Nordhaus and Romer with the prize. But, as befits persons of their intellect, these are not the only areas where their ideas have broken new ground.

In 1975, Nordhaus wrote one of the earliest papers on what are known as political business cycles. The idea is simple: to look at how electoral dynamics affect economic variables like output (GDP growth), inflation and employment. For example, if a country goes to polls every five years, an incumbent government can try to improve its chances of winning the election by spending more in the fourth year to ‘boost’ the economy. The result will likely be higher growth in the year of extra spending, but with a high probability of inflation after the fifth year. Since that paper was published, many studies have been done on the subject and empirical evidence has mounted for such political cycles. It was Nordhaus who laid the foundation for the understanding of economic populism in democracies.

Romer, too, has a number of ideas that have stood out (apart from endogenous growth theory). One interesting— and at times controversial—idea is that of charter cities. As the world urbanises at a breakneck and haphazard pace, ‘urban sprawls’ and ‘unmanageable megapolises’ have become part of the landscape. Mumbai, Kolkata, Karachi, Kuala Lumpur and a host of ‘megapolises’ have now acquired a life of their own and are largely unmanageable. Romer considered the idea of charter cities, creating cities from scratch without the political and economic problems that plague existing ones. In essence, this idea too is simple: like a ‘startup’, build everything from the smallest building block, but with clearly defined rules on most aspects of civic governance. These, as Romer elaborated in an interview, could include rules about transport and traffic management.

Surprisingly, Romer’s idea has evoked controversy. Some have gone as far as to say that it is a form of ‘neo-colonialism’. That is probably not how Romer will characterise charter cities, an idea that has more to do with starting with a clean slate and clear rules, which is very different from colonialism. The element of choice—people would be free to live or not live in such a charter city—is enough to counter such criticism.

Romer has never shied away from controversy. As the World Bank’s chief economist (October 2016-January 2018) he cast doubt over the ‘Ease of Business’ (EoB) rankings. These are supposed to be an indicator of how well prepared a country is from an investor’s point of view in providing key infrastructure— both ‘soft’ and ‘hard’—such as water, electricity and services like contract enforcement. Countries have gone out of their way to improve their EoB ranks to attract global investors. Romer showed that Chile slid down the chart due to changes in the method of calculating EoB which he claimed could have been politically motivated. Soon after that, Romer left the World Bank and returned to academia.