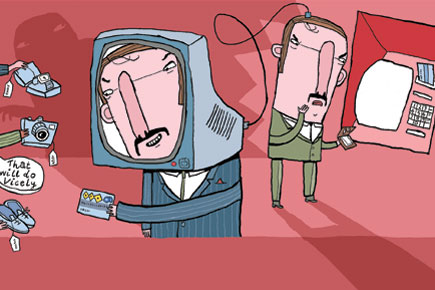 
BANGALORE ~ When his credit card statement arrived, industrialist Kumar Mangalam Birla discovered that he had gone shopping in Bangalore. Over five days, he had swiped his card six times, even buying jewellery. Altogether, he had purchased things worth Rs 2.84 lakh. Except that he had never done any of the above.

The police were informed, and with a swiftness not usually seen when an ordinary person reports such a fraud, a nine-member gang from Bangalore was arrested based on CCTV visuals and tip-offs. The gang confessed to cloning Birla’s card, but, unfortunately for them, had not known just who they were scamming. They claimed they had purchased the card number and other details for Rs 10,000 from members of an international credit card racket being operated from Thailand.

“They used a blank credit card available in the grey market and embossed the stolen card’s numbers on it. When they used it for the first purchase, the vendor’s payment gateway validated and approved it. That would have been possible only if they had got hold of the three-digit Card Verification Value number that is also printed on the original card, otherwise any transaction made on the cloned card would have been declined. So, they used it for small amounts at six locations so as not to arouse suspicion. The total purchases were of Rs 2.84 lakh,” a senior police officer said, announcing the arrest.

But that was not all. The police recovered 206 such fake credit cards that they had cloned and hundreds of card numbers from their possession. “We are verifying the numbers and contacting issuing banks and original card holders to verify their accounts,’’ the senior police officer said.

In Birla’s case, the police surmise that the Thai gang members had accessed the card number and details after it was used in Thailand on a visit.

One of the arrested, Gautham, who claims to be a hotelier, also disclosed that he had contacted fraudsters from Russia on the internet. He later met them and bought hundreds of stolen credit card numbers.