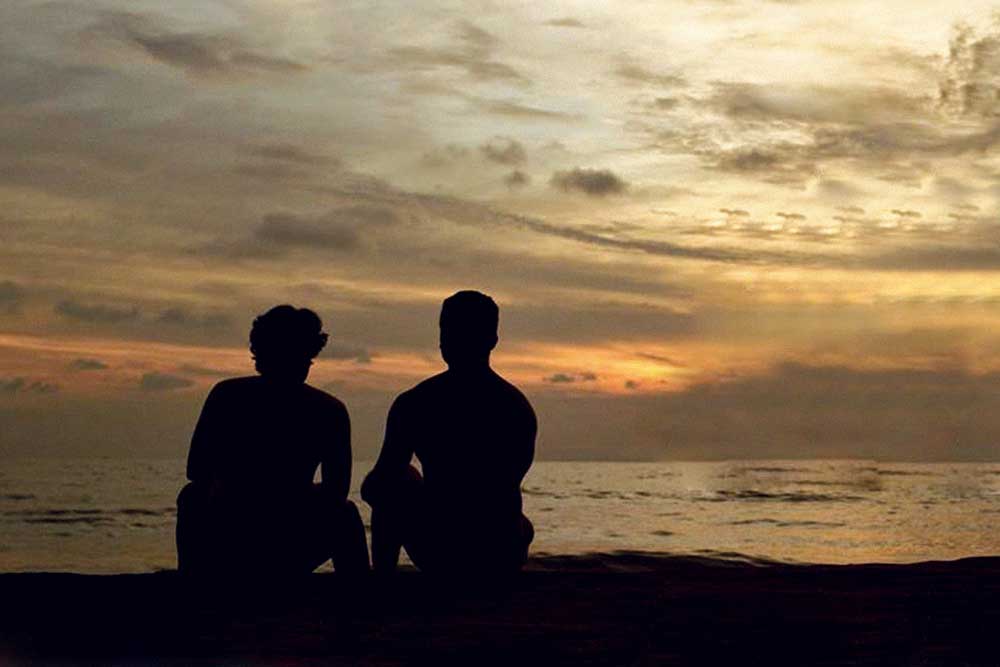 IT IS COMMON knowledge that the Central Board of Film Certification (CBFC) views any movie that questions the prevailing morals and values of society with suspicion. A court ruling over Udta Punjab recently rapped the CBFC on its knuckles for trying to be a censoring body when its role is to certify movies. But nothing has changed since then, if you go by the experience of New York-based Malayalee filmmaker Jayan Cherian. His debut movie Papilio Buddha was blocked by the CBFC. Now, three years later, he is going through the same experience again with his second movie, Ka Bodyscapes. The CBFC has denied it certification; the film was found offensive to ‘human sensibilities’ because of ‘vulgarity, obscenity and depravity’ and Hindu deities depicted in poor light.

Cherian says Ka Bodyscapes was inspired by a handful of real-life public movements in Kerala. Its central theme is a gay relationship between Haris, a young, talented but struggling artist, and Vishnu, a rural kabaddi player. The third protagonist is their friend, Sia, a Muslim fighting for women’s rights. Haris is preparing for his first solo exhibition and invites Vishnu to stay with him in the city. Vishnu belongs to a traditional Hindu family and despite social restrictions, manages to establish a live-in relationship with Haris. Sia, a regular visitor to their apartment, meanwhile, battles the misogynist impositions of her conservative relatives. At work, a used sanitary napkin is found in the bathroom and all women workers are strip searched. She questions this humiliation and posts a photograph of a sanitary napkin soaked in blood on Facebook. This is derived from a real incident in Kerala that triggered off social media campaigns like #BloodyNapkin and #HappytoBleed. Life becomes a relentless battle against conservative moral codes for the three, and they struggle to find happiness in their own world. Sia leaves home and moves in with the couple, but all three are eventually evicted from the rented apartment and Haris paintings are all destroyed.

Cherian says the film is unique for its organic relationship with the LGBT movement in the country. The cast is full of activists, he says, and they represent different facets of social life. Naseera, who plays Sia, works as a journalist. She says, “Censor Board members are sick with homophobia. I really don’t understand what they mean by ‘obscenity’. The film depicts a relationship between two gay men; there is no explicit expression of intercourse or anything close to that. Intimate scenes between heterosexual lovers are very common in mainstream cinema—the Censor Board doesn’t seem to have a problem with that.” Naseera herself had once suffered public humiliation on account of menstruation. She was offloaded from a state-run bus to Sabarimala with her two young kids and aged mother-in-law because, as the bus conductor said, there were lots of male pilgrims on board and he could not risk accommodating a woman passenger ‘who may be menstruating’. “Most of the incidents in the film are based on real life situations. That might be the reason the authorities are upset with it,” adds Naseera.

The LGBT community in Kerala, however, has welcomed Ka Bodyscapes. “It is a political movie,” says Shyam Sheetal, a prominent voice in the transgender community. “The same Censor Board gives certificates to films that show explicit violence and sexual harassment. It often does not find any problem with dialogues and action in mainstream cinema that are derogatory to women and sexual minorities,” she adds. Shyam has also acted in the movie herself.

According to Jayan Cherian, there is no substance to the allegation that Hindu gods have been insulted in the film. “I have not insulted anyone’s feelings. Hanuman is a fictional character. Artists and writers create art by interpreting the work done in the past. That is a usual practice followed in the world of art and literature,” he says. He thinks institutions like the Censor Board are stuck with archaic moral codes and standards. When the Board denied Papilio Buddha a go-ahead citing scenes that were said to be derogatory to Mahatma Gandhi, it later demanded 56 cuts to get the film cleared. For Ka Bodyscapes, however, no certificate is to be issued, with or without cuts.