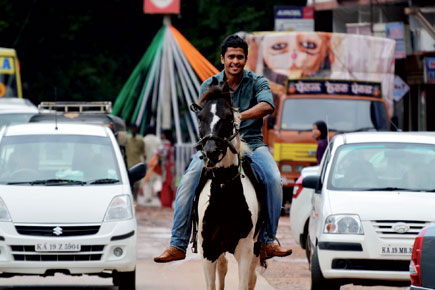 Meet the Mangalore student who takes an equine ride to college

Students usually demand a car or a bike of their parents on coming of age, but Avinand Achanahally had a shock in store for his: he wanted a horse. His parents agreed, and the 24-year-old, who is studying for his post- graduate Masters degree in Social Work in Roshni Nilaya, Mangalore, now rides a horse to college.

Avinand learnt horse riding while working in Bangalore two years ago, and, in equestrian terminology, can both trot and gallop. “I have dogs, cows and pigeons at home, which is a coffee plantation, 230 km from Bangalore. But, from a very young age I was fascinated by horses,” he says.

So, when his parents insisted that he study further, he laid down a condition that he would pursue a post-grad course only if they buy him a horse. His family friend, MP Ganesh, gifted him Sikandar, a seven-year-old Kathiawari breed, six months ago.

For the last month-and- a-half, he has been turning heads in Mangalore as he goes about his daily commute on a horse. Every morning at 6 am, Avinand cleans the stable. Once done, he rides Sikandar to a gym. The equine is parked outside, and after his master completes his workout, they both head to his residence to freshen up and then ride to college in peak hour traffic. “Sikandar has tremendous road sense,” according to Achanahally. “He stops at least five feet behind any vehicle and has the sense to move only when other motor vehicles around him move, especially at traffic signals.’’

Sikandar is given a 15-minute brush daily and kept on a high-protein diet. “It costs me less than Rs 3,000 per month to maintain him. The amount is less than what I spend on petrol for my car, and the carbon footprint too is negligible compared to motorised vehicles,” he says.

The college authorities have allowed the horse to be tethered on its six-acre campus, where there is plenty of grass.