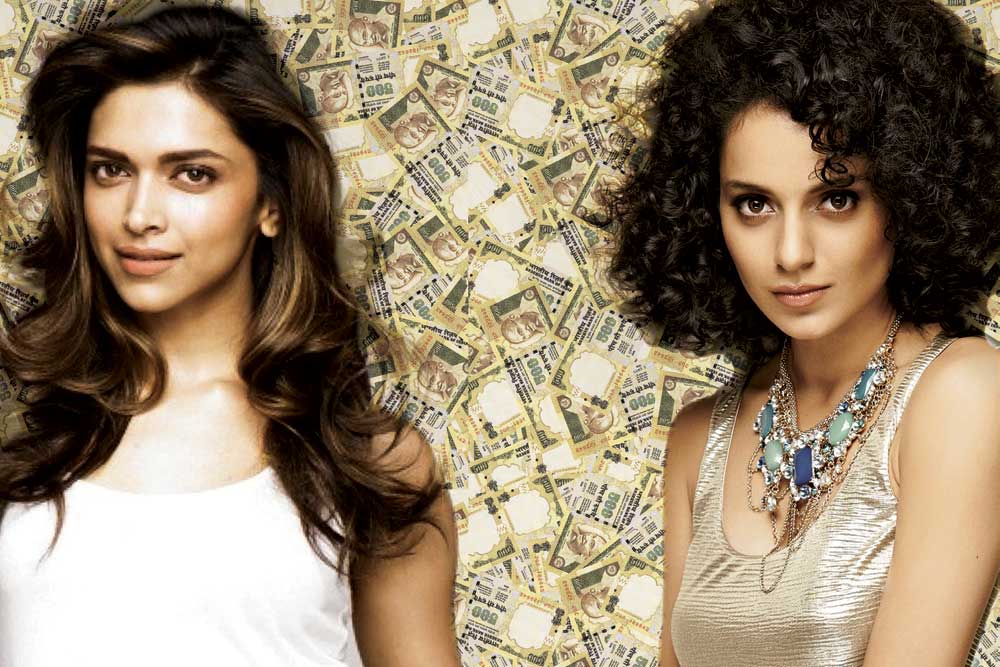 FOR SEVERAL DECADES now, leading heroines of the Hindi film industry have earned less than their male counterparts. Male superstars like Salman Khan and Shah Rukh Khan, for instance, are said to charge anything between Rs 20 crore and Rs 25 crore as remuneration for a film, plus a share of profits if the money made crosses a pre-set figure. But in the past six months, a rise has been visible in the pay packages of Bollywood female actors.

Actors like Kangana Ranaut and Deepika Padukone have chosen to substantially hike their fees for their forthcoming films. Earlier this year, Padukone was listed tenth on a list of the Top 10 ‘World’s Highest Paid Actresses’ by Forbes magazine. This had much to do with her Hollywood debut in the action-thriller XXX: Return of Xander Cage with Vin Diesel. She is rumoured to have been paid Rs 15 crore for her Hollywood venture, raising the bar for what she can demand back home. The magazine reported Padukone’s annual earnings at an approximate $10 million (Rs 66 crore), counting film fees as well as brand endorsement deals in the year 2015-16.

After her recent films like Piku and Bajirao Mastani did well at the box office, Padukone has now signed Sanjay Leela Bhansali’s next, Padmavati, if sources are to be believed, for Rs 11 crore. “I believe one makes as much as one demands, not just verbally, but by standards of the work you put out there. A disparity between pay packages for men and women exists in every sector. That’s a larger issue which we need to address. So I don’t understand why it becomes such a big deal when female actors in Bollywood charge a good fee,” says Padukone, who is now rumoured to be Bollywood’s highest-paid heroines.

Meenakshi Shedde, a film expert who curates and programmes film festivals, is circumspect when it comes to these numbers. “These are purely speculative figures, and one can never be sure,” she says. “But yes, the fact is that when a Deepika or a Priyanka sign international ventures, they get into an enviable position women in our industry have vied for, for years. So if you say that they’re carving a way for others, it’s true.”

Ranaut, the other top female star, has spoken openly about wanting to get Indian heroines more equitable terms. The two-time National Award winner now expects her accolades to reflect on her pay cheques too. Her manager (and sister) Rangoli was recently quoted as saying that Ranaut too will charge Rs 11 crore for her films after Tanu Weds Manu: Returns. This would include Vishal Bhardwaj’s Rangoon. “We are in an industry where for a long time the heroes used to bring in the crowds. Heroines were part of two odd songs and a fight sequence, for effect. They couldn’t demand more money because they were doing nothing in those films,” Ranaut says. “Today, there’s a small but sure change in perceptions about how women need to be portrayed in cinema. A heroine can solely carry a film on her shoulders. If Queen can command a crowd, I have all the right to ask for the money I think I deserve.”

Bollywood, however, has always paid its heroes far more than heroines. And despite the record pay cheques being given to female actors now, it’ll be a long way before true gender parity is seen. “About 30 years back, Hema Malini was touted as the highest-paid female actors in Hindi films, but even then Amitabh Bachchan made three times more money than she did. Today, the pay packets have gone up, but disparity remains. In fact, it’s even bigger. Even if we keep the Khans aside, actors like Ranbir Kapoor and Ranveer Singh get paid a lot more than their female co-stars, and that’s hugely unfair,” says Tanu Weds Manu: Returns director Aanand L Rai. “We are inching towards equal screen space, so why shouldn’t they demand better money?”

Some leading ladies have also turned producers. It’s a small but significant step ahead for women. Not only can they back good projects this way, but also decide their own worth as heroines. Anushka Sharma, who produced NH10, says, “I co- produced NH10 not with the intention of making money, but because I wanted to back a project I believe in. The fact that the film made money makes me more confident. Yes, I will be part of big productions because that’s where I will make the money which I can then use as a producer.” Priyanka Chopra, whose company Purple Pebble Pictures produces everything from online shows to regional films, claims the power to decide how much money she gets paid for a project had much to do with why she chose to turn producer. “If I have the power to create content, no one will be in a position to tell me how much I get paid for my work. I decide, and that’s imperative,” she says.

However, recent news reports about the poor health and the closure of big studios and production houses because of failed films is likely to impact the pay packages of both male and female actors in the near future. “The film industry is going through a rough patch with big studios like Disney and Viacom 18 losing money in their ventures,” Shedde says. “Hopefully, better cinema will prevail and good scripts will put female actors back in a position to demand better pay.”