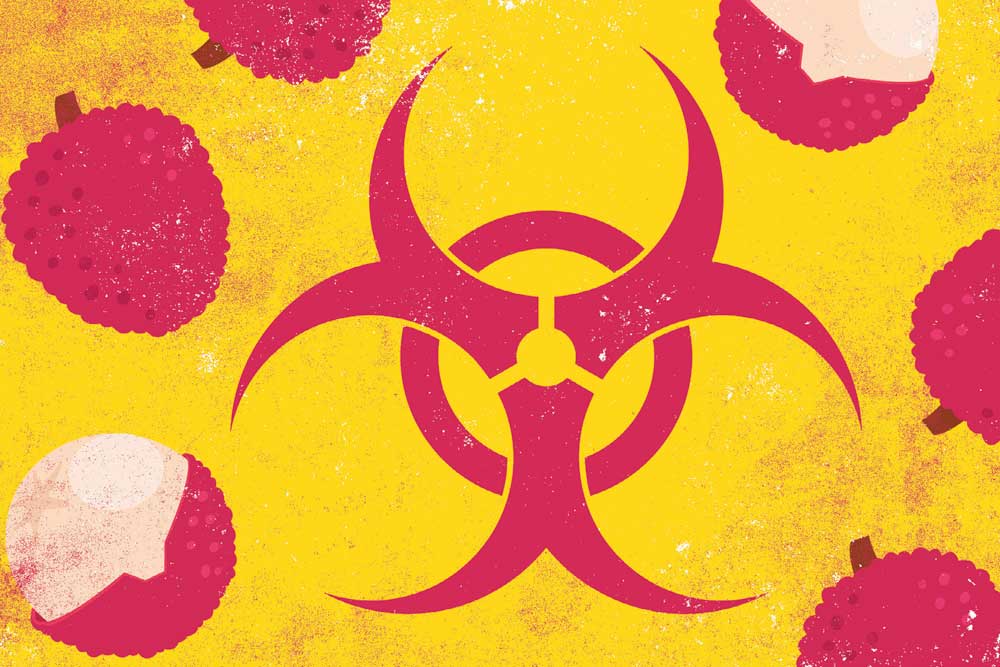 FOR MANY YEARS now, in several districts of Bihar—Muzaffarpur in particular—a mysterious ailment has been killing children under the age of 15. Most of these children are reportedly well in the evening, but by the early hours of the next morning, their conditions alter rapidly. They are overcome with seizures, fever and a swelling of the brain, followed soon after by death.

Such cases have been seen in Muzaffarpur, reportedly, since 1978. From the 1990s onwards, the district hospital began to record an incredibly large number of casualties, often going into the hundreds every year. The disease has been termed Acute Encephalitis Syndrome (AES), an umbrella term for anything that causes severe brain inflammation. However, medical researchers and doctors have been unable to identify the exact reason for the occurrence of the disease.

Now two new studies have drawn a direct correlation between litchis and AES. Researchers Dr Jacob John, an epidemiologist at Vellore’s Christian Medical College, and Dr Mukul Das, a biochemist at Lucknow’s Indian Institute of Toxicology Research, published a study in Current Science, linking toxins in the fruit with AES in 2014. This January, Lancet Global Health also published a study—a collaboration between scientists from India’s National Centre for Disease Control and the US Centers for Disease Control and Prevention— linking the two.

The studies point a finger at two specific toxins in litchis: Hypoglycin A or methylene cyclopropyl alanine (MCPA), and methylene cyclopropyl-glycine (MCPG). These two can cause low blood glucose levels. Researchers note that malnourished children who grow up close to or play in litchi orchards and who skip dinner tend to consume the fruit once it falls on the ground. The studies also draw parallels with the case of Jamaican vomiting sickness among children in the Caribbean, which is believed to have occurred due to the consumption of unripe ackee fruit. The fruit, like the litchi, is a member of Sapindaceae (or Soapberry family). ‘There is, however, cause for major concern that litchi-induced seasonal toxic hypoglycaemic encephalopathy will not only continue to be mistaken for a viral disorder, specifically Japanese B encephalitis,’ the Lancet study notes, ‘but also affect other regions of Asia where commercial litchi production is increasing and poorly nourished children have access to dropped, damaged, or immature fruit that cannot be sold.’

This theory, however, has its sceptics. Dr Vipin Vashistha, a paediatrician who runs Mangla Hospital and Research Centre in Uttar Pradesh’s Bijnor, points out that the unripe ackee fruit has a much higher concentration of MCPA than the unripe litchi. MCPA is believed to be more toxic than MCPG. “If we go with [the two studies’] argument, for it to be lethal, the children will have had to consume a very huge amount of litchi,” says Dr Vashistha. He adds, “Even if it is assumed that MCPG is as toxic as MCPA and has the same LD50, a child weighing 10 kg would need to consume at least 1.72 kg [around 120 litchis] pulp of semi-ripe litchi or 5.4 kg pulp [around 360 litchis] of ripe litchi to develop full blown toxicity. Is it feasible for an undernourished child to binge on such a huge amount of fruit pulp?” Dr Vashistha also says that the ripening of litchi in Muzaffarpur usually occurs in the third and fourth week of May and the outbreak of the disease peaks during the first two weeks of June, a time by which the entire crop is ready for harvesting.

There is another recent study that claims that litchis are responsible for AES but the cause is not within the fruit but outside it. The study, published in June in the American Journal Of Tropical Medicine and Hygiene, was conducted by a team of US and Bangladeshi researchers who studied an outbreak of AES in northern Bangladesh in September 2012. According to the researchers, farmers were indiscriminately using highly toxic pesticides, some of which, like endosulfan, are banned in several countries. ‘During spraying pesticides over lychee trees, the edible fruit fleshes of cracked lychees were likely exposed to pesticides. Since children reportedly did not wash the lychees before eating and used their teeth to peel the lychees, unwashed lychees contaminated with pesticides may have increased the risk of poisoning,’ the researchers write, while noting that they could have also been exposed to pesticides through skin contact and perhaps inhalation. According to them, the outbreak ends with the onset of the rains, suggesting that the toxins associated with litchis reside on the surface and get washed away.

Dr Vashistha, however, believes the two outbreaks may be different from each other. “In Muzaffarpur, the death rate was much lower, something like 50 per cent. In the Bangladesh outbreak, it was much higher [13 out of 14 died]. Also, the deaths itself happened very quickly in the Bangladesh cases [within 20 hours of the onset, according to the study]. Over here [in Muzaffarpur], it took a few days at least,” he says.

So what could be the cause of this mysterious ailment? “It surely has something to do with litchi,” Dr Vashistha says. “But I don’t think any of us has stumbled upon the exact reason.”