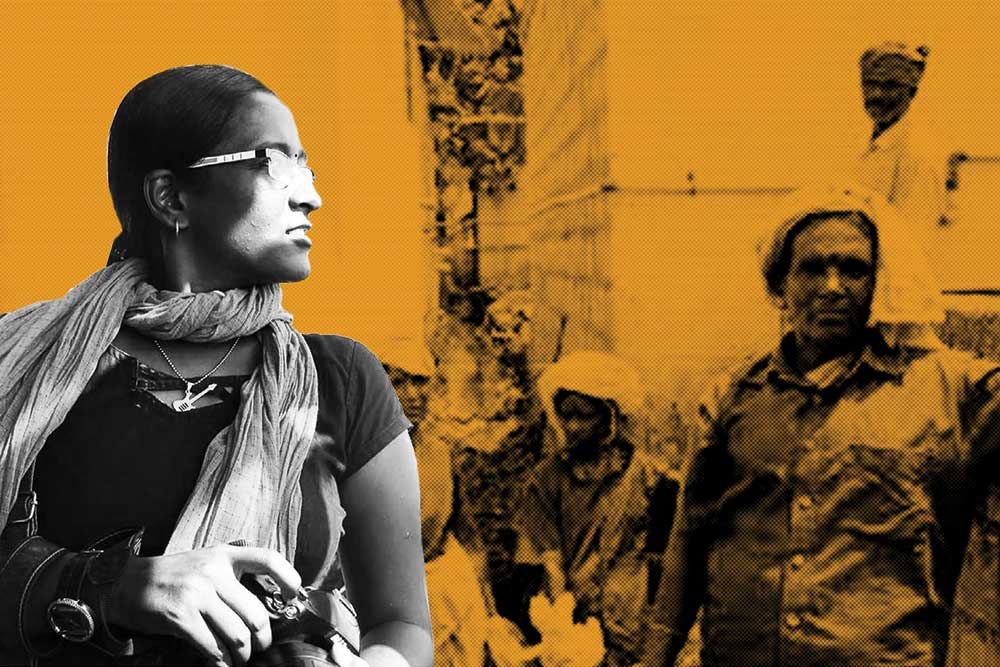 Last week, Divya Bharathi, the 25-year-old director of Kakkoos (Toilet), a documentary film on manual scavengers in Tamil Nadu, decided to leave the state. This was because she has so far had 12 cases filed against her across five districts in Tamil Nadu, under charges that include promoting communal enmity. She has also received more than a thousand phone calls threatening acid attacks, rapes and murders. The calls kept coming until she stopped answering them.

Kakkoos was released on February 26 in Chennai. The next screening, organized by a cultural group, was scheduled on March 4 in Nagercoil but it did not happen because Thirunelveli’s Superintendent of Police felt that it would ‘create law and order problems’. The next scheduled in Coimbatore on International Women’s Day was also stalled. The pattern continued with reasons given ranging from absence of certification to Bharathi’s ‘Naxal background’. Manual scavenging is banned in India. In Kakkoos, Bharathi detailed how the authorities were responsible for perpetuating it. The film, when it first came out, was widely discussed and appreciated outside Tamil Nadu. It was shown in all the major metros and in a few universities. Bharathi received accolades for exposing the reality of this phenomenon. In July everything changed.

“On July 13, 15 sanitary workers of Anna University made a complaint to the police against the inhuman treatment by the Dean. The next day all of them were dismissed. They started an agitation by blocking the gate of the university and the police roughed them up. When I came to know about this, I interviewed them and uploaded it on Youtube on July 21. In a few days, the video had been seen by 8000 viewers,” she says. Bharathi says she got phone calls from people who introduced themselves as wellwishers of the Dean and asked her to remove the video. Bharathi refused.

On July 26 morning, she received a call from the police asking to be present at the office of the Assistant Commissioner of Madurai. She agreed to do so in 40 minutes but within minutes a team of policemen barged into her house and arrested her. She was told that it was for a case filed in 2009 when, as a first year student of Madurai Law College, she had been part of an agitation. A student had died of snake bite in the hostel and they had demanded compensation to the family and the building of a compound wall. Eight years later, this case mysteriously reappeared.

She was released on bail the same day but the real ordeal began after that. On the morrow K Krishnaswamy, leader of Puthiya Thamizhakam, a political party representing the Dalit Pallar community, made a press statement alleging that Kakkoos hurt the sentiments of Pallars and that his party would serve a notice demanding an explanation from Bharathi. The abusive and threatening calls immediately began. “I filed a complaint to the police on July 29. By then I had received 1200 calls. I didn’t switch off my phone. I picked up the calls and tried to talk. I asked them whether they have watched the film. They didn’t bother to make a meaningful dialogue,” she says.

Kakkoos is her debut documentary and it is a hard and disturbing film to watch with scenes that show human beings soaked in excreta. Though she had been interested in movie-making since her teens, a film on manual scavenging had not been in her thoughts. That happened accidently. In October 2015, two manual scavengers, Muniandi and Viswanathan, died after entering a septic tank in Madurai. Workers protested for three days demanding redress to their families and Bharathi, as a political activist, joined them. “When the body was taken out of the mortuary, no one could stand the odor. Everyone, including their family members, stepped back closing their noses, but Mahalaxmi, the wife of Muniandi, came running and fell over his body. She cried violently hugging and kissing the dead man. It was like a slap on my face,” she says. That was the moment when Kakkoos was born.

Bharathi spent time with those working in manual scavenging and listened to their narratives. Initially, it was very difficult. She had to train to not mask her nose or even show her discomfort in the presence of excreta. “Any such action would hurt them. Even a light frown on my face would make them feel uncomfortable with me,” she says. She dropped the idea of carrying the camera and instead just traveled with them, conversing while they cleaned toilets with bare hands. She ate food and had tea with them, visited their families and went for walks together in leisurely hours. It was only after that she began shooting.

She knew how to handle a camera and edit footage. She and her partner Gopal Krishnan had a business of making wedding albums in video. They had a Canon 700D camera which was not sufficient to make a movie. “We borrowed a Canon 5D from a friend. There was hardly any money. We started working by taking loans from friends,” she says. Kakkoos was completely crowdsourced and even she had not thought that it would become this famous. The initial plan was to film the life of six to seven manual scavengers but it ended up covering 25 cities and small towns across 16 districts all over Tamil Nadu over the course of a year. “When I finished shooting, I had footage of 92 hours. I did the first cut and reduced it to five usable hours. The final edit, of one hour and 49 minutes was done by MK Pagalavan, a professional editor.”

Bharathi grew up the only daughter of a cotton mill laborer in indigent circumstances. They lived in tiny rooms provided by the company. “Whenever the landlord turned up we were supposed to stand up. Everyone followed it not because of respect but out of fear. I was angry and ashamed about it,” she says. “Many girls in my peer group either ended up in child labour or were married off even before completing tenth class. But my father was very particular about my education.”

When she was 14, Bharathi became a member of CPI (M-L) Liberation. She was influenced by teachers in her school who had an active association with the party. “They used to tell us about the exploitation and discrimination around. Though I didn’t understand completely, I realized that they were talking about our lives that had never been respected and valued. There were a lot of cultural activites too including film screenings every week. I watched movies like Bicycle Thieves and Battleship Potemkin.”

Her father noted the changes in the life of his little daughter and was frightened. There were heated exchanges between them as he tried to make her ‘an ordinary girl’ like everyone else in the locality. He disliked her watching movies. “He stopped giving me money, so that I would not go for film screenings. I either walked or went on my cycle to the movie hall which was seven kilometers away from my village,” she says.

After her Plus Two, she joined The American College in Madurai to study in their department of Visual Communication but couldn’t complete the course. There was a dispute between two sections within the management and classes were suspended for an indefinite period. Students started an agitation against it in which Bharathi had a lead role. The college management retaliated by fining student leaders. “They asked us to pay Rs 35000. It was impossible for me,” she says. She decided to discontinue the course. Later, she joined Government Law College, Madurai.

In the beginning, she was not regular there. Being an active member of CPI (M-L) Liberation took much of her time. “I was assigned to organize laborers working under NREGA. Most of them were women getting only half of the amount stipulated in the statute. They were highly exploited by middlemen. We organized them and conducted protest meetings demanding 200 days of work in a year and Rs 200 a day,” she says.

Bharathi was the Madurai district secretary of the student wing of her party, All India Students Association (AISA). The Dalit hostel in Madakkulam was in a deplorable condition. Because there was no compound wall, in December 2009, a second year BA English student died of snake bite inside the hostel room. “This shocked us. Students started an indefinite strike demanding compensation to his family and for the construction of a compound wall. FIRs were lodged against many students who were in the forefront of the agitation. We all took anticipatory bail in that case,” she says. Since such cases are frequent in student politics, Bharathi forgot about it until eight years later without a summon or warrant she was arrested for it.

Balamurugan, a 28-year-old manual scavenger at Kadaladi in Ramanathapuram district, died on April 20, 2016 after inhaling toxic gas as soon as he got into the septic tank. Bharathi was shooting the film and, when she heard of his death, reached the place and met the grieving family. It led to the name of her film. “Balamurugan had two twin eight-year-old girls, Muneeswari and Murukeswari. First I met Muneeswari and went inside to talk to his wife. By the time, I came out the other girl was there but I didn’t know it was the twin sister. I called her Muneeswari, but she corrected me says that was not her. When I asked her name, she said ‘Kakkoos’ (Toilet). She then quickly corrected it and gave her real name. Children of manual scavengers are called Kakkoos by others and that had led to her spontaneous reply. In that moment, I decided to name the film Kakkoos.”

Bharathi’s attempt to get statistics of manual scavengers in Tamil Nadu for the film was not successful. The majority are contract workers and their records are not kept properly. “As per my own data, that I collected from newspaper reports and information from friends, the number of manual scavengers who died on work between October 2015 and December 2016 was 27.” Along with her party comrades, she has also organized manual scavengers and staged protests in ten cases of deaths demanding FIRs to be registered under the 2013 Act that banned manual scavenging. “We got favorable orders in five cases,” she says.

In March 2016, while the film was being made, she got information that a manual scavenger had died on the job in a place called Sattur. When they reached there, they could see no one but the ambulance driver and his helper. “There was no one even to carry the body,” says Bharathi. “We did it.” That footage of a film crew’s becoming part of the lives of their subjects is also there in the movie.