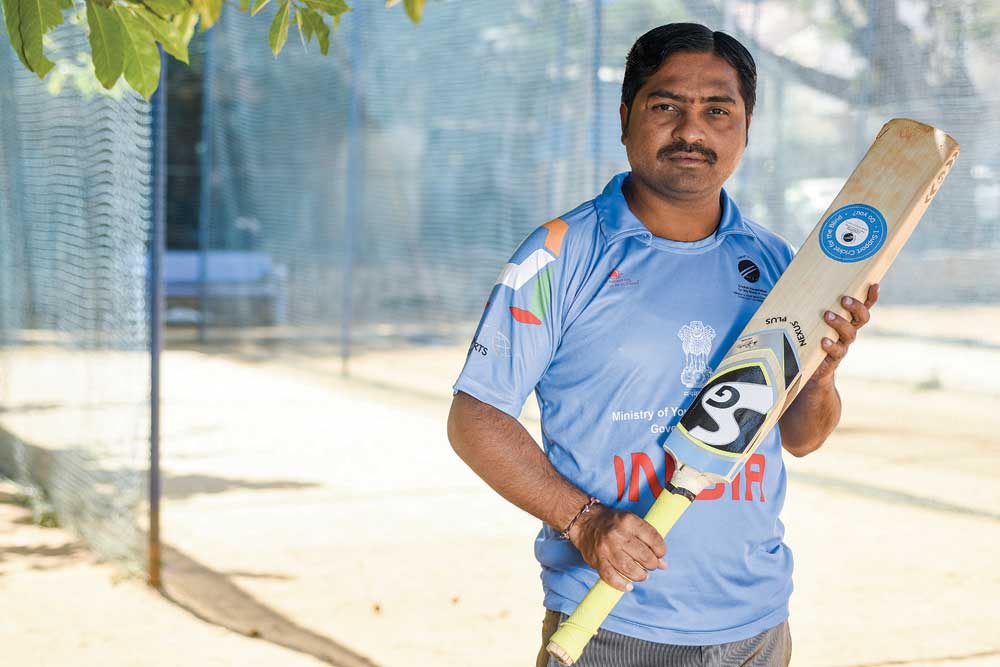 IN THE RECENTLY-CONCLUDED T20 World Cup for blind cricketers, which India won for the second time in a row by defeating Pakistan in the final, one particular individual was a regular feature in the Indian camp throughout the tournament. Although not participating on the field itself, he would sit in the team meetings, chalking up plans and strategies. He would also be seen chatting up players and officials at the games. And, occasionally, he would even send messages during drink-breaks to either cheer up or reprimand members of the Indian team. The person in question is ‘team mentor’ Shekhar Naik—a beacon of light for blind cricket in India.

Late last month, when the list for this year’s Padma Shri recipients was released, among the names of cricketers, along with current superstar Virat Kohli, was Naik. His inclusion—the first such honour for a visually-impaired cricketer, a great distinction since the blind format isn’t officially recognised by the BCCI and often struggles for financial support—galvanised the team. On the evening of that announcement, every member of the 17-member blind India contingent called up Naik to congratulate him. “They told me they were inspired enough to win the World Cup,” Naik says.

Naik, 30, is considered one of the world’s most proficient blind batsmen. A B2 category player (someone who can see up to 3 metres), he led the Indian team to two successful blind World Cup campaigns, the T20 World Cup in 2012 and the 40-over World Cup in 2014, thereby becoming one of only two Indian captains to win two World Cup tournaments in different formats. MS Dhoni is the other.

Since 2010—when the Bengaluru-based World Blind Cricket Council, the equivalent of the International Cricket Council for blind cricket, began maintaining cricket records— Naik has scored 32 centuries across both T20 and 40-over formats. His career highlights include a 198-not-out he scored in Rawalpindi in 2004 and a 58-ball 134 he scored during the T20 World Cup against England in 2012.

Blind cricket is said to have developed in the 1920s in Australia, when visually-impaired factory workers began using a tin can containing rocks as a ball to play a version of the game. Over the years, the game has developed with some modifications to aid such players. Every ball, made of reinforced plastic and filled with ball bearings, makes a rattling sound. Players have to give audible clues when they are ready to take strike or to bowl. And each team needs to have four players who belong to the B1 category (completely blind), three from B2 and the remaining four from B3 (who can see up to 6 metres). In India, blind cricket began to gain ground in the 1970s, when visually- challenged youngsters started following radio commentary of cricket matches and blind schools began organising inter- school cricket tournaments. Later, an organisation called The Association for Cricket for the Blind started administering and promoting the game in the country.

Naik was born completely blind in Shimoga in 1986, a small town in Karnataka. A surgery later restored about 60 per cent of vision in his right eye. After his parents’ death early in his life, he was raised in a hostel for blind children. It was during this period that he began playing cricket. “I was mad about the game. I used to forget about exams and school and play it almost every day,” he says. At some point in his growing up years, he acquired a transistor and began to follow cricket matches that were broadcast on All India Radio. He began to fancy Virender Sehwag’s game. And like Sehwag, he began to open the batting for his school. He even modelled his batting technique on radio descriptions of his hero’s shots. He was in Karnataka’s blind cricket team by the time he turned 14, and in the Indian team by 16. To support his passion, he found the job of sports coordinator at Samarthanam Trust, an NGO run by CABI that administers blind cricket in India.

Naik injured his back last year. Although he was fit by the time the recently concluded T20 World Cup commenced, he decided to sit out and allow someone else a chance. “World Cup campaigns are very important for blind cricketers, financially as well. If we win, we can make between Rs 4 to 5 lakh from match fees and sponsorship. I knew I had to give somebody else that chance [to earn fame and money] this time,” he says.

When his name was announced for the Padma Shri, his teammates were not the only ones struck with disbelief. He was too. When he first heard the news—a media coordinator at the Karnataka State Cricket Association who also moonlights as a cricket umpire had called him—he thought it was a prank. “‘Mazaak band karr,’ I told him and hung up,” he says.

A full half hour passed before local reporters began to call for a sound bite, simultaneously confirming the news. Once it sank in, he had the task of convincing his wife and daughter of what had just happened. They did not believe it either. So Naik made his family wait for a news channel to announce what he already knew. ‘Shekhar Naik, Padma Shri.’