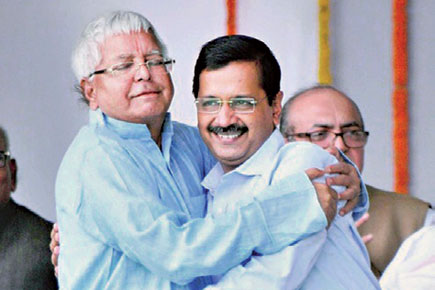 It was not a picture perfect moment—he who once upon a time railed against the man of the moment, captured hugging him with a grin. When Delhi Chief Minister Arvind Kejriwal and Rashtriya Janata Dal chief Lalu Prasad embraced each other at Nitish Kumar’s swearing-in ceremony, it woke up the troll armies. Because, not too long ago, when Kejriwal was an anti-corruption crusader, Lalu was one of the symbols he would use for rants against how rotten the system was.

This week Kejriwal gave an explanation for the hug and it still doesn’t make him look any less hypocritical. “He shook my hand and pulled me into a hug and then he held my hand and raised it,” said Kejriwal.” He also pointed to the fact that he was not in a political alliance with Lalu, but was present in Patna to cheer Nitish Kumar, who led Bihar’s Grand Alliance to victory. Kejriwal also maintained that he’s against Lalu’s record of corruption and will always oppose it, but the ‘pulling me into a hug’ excuse seems silly. If Lalu pulled him in, why not pull out? It wouldn’t be courteous but it would make it evident to the world that Kejriwal opposes what Lalu stands for. Instead, what we have from Kejriwal are just words—and from a politician, these count for little.