The evolution of feathers

Plumage did not emerge to help birds fly, but to either attract mates or stay warm 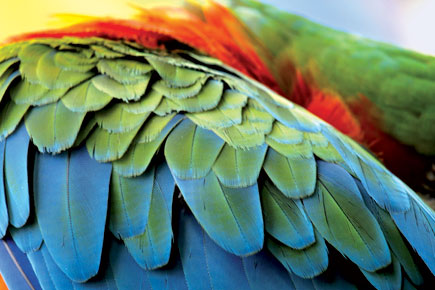 Plumage did not emerge to help birds fly, but to either attract mates or stay warm

Feathers, we have come to believe, evolved in birds to help them fly. That the distinctive outer covering or plumage found on modern birds is so well adapted for flight that they must have evolved for this very purpose. However, a new study claims that this is incorrect. According to its research, published in the journal Nature, feathers first appeared in birds’ ancestors for other purposes. Feathers first emerged either to attract mates or for insulation, and it was only later that they were used to fly.

This discovery was made by palaeontologists of Ludwig-Maximilians- Universitaet (LMU) in Munich while studying a new specimen of Archaeopteryx—a flightless raven- sized bird from the age of dinosaurs that is considered to be the ancestor of the modern bird. Archaeopteryx represents a transitional form between reptiles and birds. It had primitive traits like teeth, a long bony tail and the absence of a bony, keeled sternum where flight muscles attach. This particular specimen, discovered in Bavaria in 2011, is about 150 million years old, and unlike previous specimens, had a fully-preserved tail. Fossils of only 10 more such specimens have so far been discovered.

When the researchers began studying the fossils, they discovered that it had what scientists call ‘pennaceous’ feathers, long-shafted ones which help birds fly, on its wings. These feathers, the researchers claim, were asymmetrically shaped and overlapped in such a way as to make them aerodynamic. However, the researchers discovered pennaceous feathers on several other parts of its body, including its hind legs, indicating that feathers did not evolve specifically for flight.

The researchers write in the journal, ‘An analysis of the phylogenetic distribution of pennaceous feathers on the tail, hindlimb and arms of advanced maniraptorans and basal avialans strongly indicates that these structures evolved in a functional context other than flight, most probably in relation to display.’ They add, ‘This indicates that the origin of flight in avians was more complex than previously thought and might have involved several convergent achievements of aerial abilities.’