Three great stories come together in the find of a fossil primate. Of these the media spin is the most extraordinary 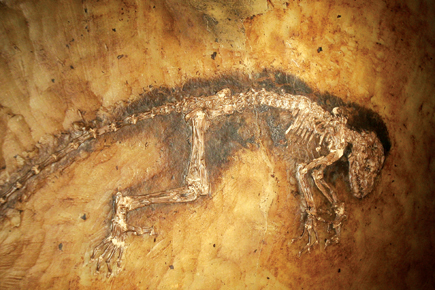 Three great stories come together in the find of a fossil primate. Of these, the media spin is the most extraordinary


The scientific story of this 47 million year old fossil was announced succinctly in a journal by Jorn H Hurum of the University of Oslo and his colleagues: ‘Darwinius masillae represents the most complete fossil primate ever found, including both skeleton, soft body outline and contents of the digestive tract. Study of all these features allows a fairly complete reconstruction of life history, locomotion, and diet.’

The story of the discovery of the fossil is a tale of its own. Hurum dug up the fossil not from the earth but from the drawer of a private dealer. At a mineral and fossil fair in Hamburg, Germany, the dealer showed Hurum a photograph of the fossil. It had been lying with him since 1983, when it was found in a pit in Germany. Hurum spent a few sleepless nights dwelling on the find. Ultimately, it was purchased for well over $1 million.

Two years later, on 20 May this year, the fossil was unveiled at a lavish ceremony at New York’s American Museum of Natural History with the city’s Mayor, Michael Bloomberg, in attendance. It was preceded by a ‘teaser’ campaign on television that included references to the moon landing, and said, ‘This changes everything’. ABC News signed up for exclusive access on its primetime news programmes. History Channel released a movie, The Link, and Little, Brown published a book by the same name. It shipped over 100,000 copies after confidentiality agreements were signed. Talking to The New York Times, Hurum expressed immense satisfaction at the PR: “Any pop band is doing the same. We have to start thinking the same way in science.’’ For the Oslo Museum, this was a coming of age party, the director said—“This could be our Mona Lisa.’’

None of this takes away from the fact that the find is important. As British naturalist David Attenborough said, “This beautiful little creature is going to show us our connection with the rest of the mammals: with cows and sheep, and elephants and anteaters.’’ But the missing link that changes everything? Not quite. As Hurum well knows, pop stars fade away. Science needs to last.