Origin of the Mutt 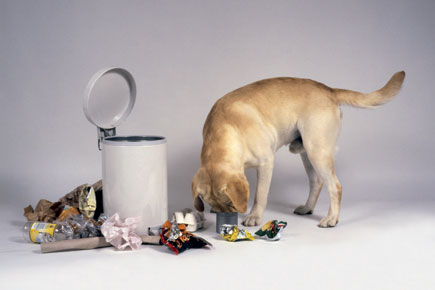 
When dod the dog become so intimately connected with humans? When and how did the modern mutt originate? According to one hypothesis, the dog emerged from ancient hunter-gatherers’ use of wolves as hunting companions or guards. Some dog populations have been around, judging by fossil evidence, for tens of thousands of years, long before the emergence of agriculture. Another theory holds that as humans took to agriculture and produced waste dumps around settlements, wolves started devouring the new food resource. Eventually these wolves came to live permanently around humans.

A new study of dog genetics has found evidence that the latter theory is true. According to this study, the waste dump played an important role in the origin of the dog. The study, conducted by a team of Swedish and US researchers, appeared in Nature. They examined the DNA of more than 50 modern dogs of diverse breeds and compared their genetic information with that of 12 wolves from various parts of the world. Among other things, it found that in comparison to wolves, dogs possess numerous genes involved in starch metabolism, thereby showing how dogs have adapted to the same starch-filled foods as their owners.

The authors write in the journal: ‘The domestication of dogs was an important episode in the development of human civilization. The precise timing and location of this event is debated and little is known about the genetic changes that accompanied the transformation of ancient wolves into domestic dogs.’

The researchers identified 36 regions of the genome that set dogs apart from wolves. They found that in comparison to wolves, dogs have more copies of a gene called AMY2B, a type of protein in the saliva and pancreatic juice, which helps convert starch into sugar. This gene was found to be 28 times more active in the pancreas of dogs than in wolves. In addition, ten genes that help dogs digest starches and break down fat were also found. These peculiarities would have proved extremely advantageous in an ancestor scavenging on the discarded leftovers of early farmers. According to the researchers, while wolves also have some of these genes, the dog is much more efficient in making use of the nutrition in starch than the wolf.