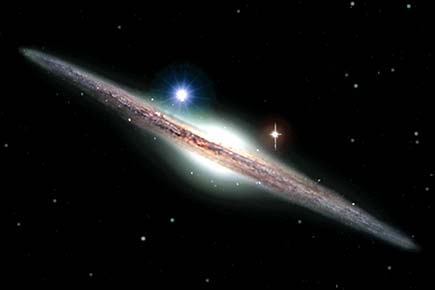 An entire genre of science fiction is based on some variation or the other of a black hole that transports spaceships through time. However, all of Hollywood put together does a bad job of telling most viewers what black holes actually are, and why they remain one of the most fascinating objects in astronomy.

Let’s just start with the simplest, black holes that range in size from three to 20 times the size of the sun. These are the evolutionary endpoints of stars that range between 10 to 15 solar masses and are formed at the end of a star’s lifecycle when it begins running out of fuel at the centre.

Stars are fuelled by nuclear reactions in their core that counteract the force of gravity pulling matter inwards. Eventually, when the nuclear reactions die down the star collapses upon itself, and after the outer layers have been expelled by the energy generated by the collapse what survives is a singularity, of zero volume and infinite density from which even light cannot escape.

While the formation of black holes of this type is well understood, they are not the only types that have been observed to exist. It now seems that most galaxies have super massive black holes at their centre with sizes ranging from thousands to billions of solar masses.

One theory holds that they are assembled from smaller black holes coming together. Unfortunately, no black hole that is intermediate in size had been observed till recently.

Now, astronomers at Britain’s University of Leicester in a paper in Nature have identified a new source, HLX-1, the light blue object to the top left of the galactic bulge that signals the presence of a black hole more than 500 times the mass of the sun.

It lies on the periphery of the edge—on spiral galaxy ESO 243-49, about 290 million light years away from earth.

The identification of HLX-1 is, therefore, an important step towards a better understanding of the formation of the super-massive black holes that exist at the centre of the Milky Way and other galaxies.