A renowned algebraic number theorist who plays the tabla, a biologist trying to unravel the mysteries of the human cell, a scientist who can transform the industrial-scale production of plastic materials, and another who is working on a cancer screener that can be used at home—all of them Indians at the cutting edge of science and technology who were awarded the Infosys Prize 2012 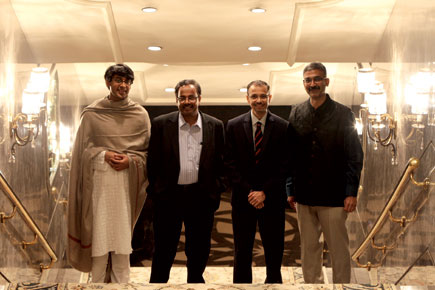 Meet the scientists who won the Infosys Prize 2012


THE SCIENTIST WHO CAN STOP COUNTERFEITERS

If Dr Ayyappanpillai Ajayaghosh, a scientist based in Thiruvananthapuram, succeeds in his latest project, a lung cancer screening process will neither require the help of a medical professional nor need to be done in a hospital. The individual can simply cough onto a strip of paper, and, under the glare of a UV torch, check if the strip changes colour. If it does not change, it would indicate that the individual is not suffering from the illness.

Dr Ajayaghosh, winner of the Physical Sciences prize, is one of the country’s foremost supramolecular chemistry scientists, a relatively new field of chemistry. Here, as opposed to traditional chemistry which focuses on covalent bonds between molecules, the weaker and reversible noncovalent interactions between molecules are examined.

“Nobody knows how molecules come together to form structures. But we are trying to understand that, to understand how molecules communicate with each other, and how we can recreate molecular structures,” says the 50-year-old senior scientist at the National Institute for Interdisciplinary Science and Technology. The focus of his research is on organogels or pi- systems, a new class of molecular assemblies that possess strong fluorescent and electronic properties. Extremely sensitive to their environment, whenever these organogels come in contact with or sense a foreign surrounding, they can stop emitting light or change colour.

Using these properties, Dr Ajayaghosh has showed how such organogels can be used as security labels for important documents. For instance, currency notes can sport thin strips containing such organogels. Whenever a UV torch is beamed on it, the strip will glow. Forged notes, however, will not exhibit such a property. “I believe science should not simply be focused on theory; it should be able to provide solutions to the world’s problems. And the potential of these pi-systems is simply tremendous. From having its use as a chemical marker in diagnosing diseases, like cancer, at early stages, it can be used to detect explosives such as trinitrotoluene (TNT) and landmines,” he says. Dr Ajayaghosh has also shown that these molecular assemblies can generate electricity and be used to build superior light harvesting devices.

THE MATHEMATICIAN WHO PLAYS THE TABLA

The Birch and Swinnerton-Dyer Conjecture, an open problem in the field of number theory, is considered one of mathematics’ most challenging questions. It was one of the seven Millennium Prize Problems announced in 2000—considered so difficult and important that Clay Mathematics Institute will award the author of a complete proof of each problem $1 million. And very few have come close to solving it. In 2010, Manjul Bhargava, a Canadian- American mathematician whose parents were originally from Jaipur, became one of the few mathematicians who have proved a special case of the Conjecture. After having made some significant contributions in the field of algebraic number theory in 2012, Bhargava will now focus on the Birch and Swinnerton-Dyer Conjecture. He won the Infosys Prize in the mathematics category.

The 38-year-old scientist is considered one of the world’s most eminent algebraic number theorists. He graduated second in his class from Harvard, received his doctorate at Princeton, and was invited to return to the university two years later as a full professor. At the age of 28, he was the university’s youngest-ever full professor. Over the years, he has made significant contributions in mathematics. He is particularly known for solving problems that grew out of the work done by Johann Gauss, one of history’s greatest mathematicians. Some of these problems had remained unsolved for many years, and one in particular was 200 years old. More recently, his focus of research has been on elliptic curves. His theorems on elliptic curves have contributed to cryptography and in making data travel more securely over the internet.

“Even as a kid, I was somehow interested in mathematics. When I was around eight years old, I remember stacking oranges and trying to figure out if I had an ‘n’ amount of oranges on one side, how many did I need to make the whole pyramid?” he recalls. During school days, he would bunk classes so he could attend lectures his mother, a mathematician at Hofstra University, New York, gave.

Bhargava, however, isn’t only an eminent mathematician. He is also an accomplished tabla player, having been a student of Zakir Hussain and Prem Prakash Sharma for many years. “Both maths and music are about patterns. Often I return to a mathematical problem after taking a break to play the tabla , and I realise things have cleared up,” he says. Although he does not play the tabla as frequently as he used to, especially during the season he holds lectures, he sometimes plays the instrument in performances. Bhargava, in fact, took to the tabla even before mathematics. When he was around three years old, he would try to copy his mother playing it. “I would try to make the ‘na’ sound on the tabla and fail miserably. This interest in Indian classical music grew from there. Later, every year, I would take a few months off from college to go to India and learn the tabla,” he says.

IN PURSUIT OF THE PERFECT GEL

Professor Ashish Lele, a scientist at the National Chemical Laboratories (NCL) in Pune, was awarded the Infosys Prize for Engineering and Computer Science, for his contributions in the study of polymeric micro-materials. The 45-year-old scientist has been pursuing this subject ever since he joined the institute as a faculty member 20 years ago.

Among his major achievements is the discovery of smart polymer gels that are responsive to stimuli and mimic biological materials. These gels respond to changes in temperature and acidity, and even when they come into contact with metal ions. “We are looking not only into how the molecules in these gels are able to communicate with each other given the weak intermolecular forces between them, but also why these materials respond to a temperature change, and at what precise temperature they can be tailored,” he says.

Professor Lele has added to this research by revealing how hydrogels, which are cylindrical in structure, self-organise themselves into coconut- like structures, a process that can also be reversed when they come into contact with metal salts like copper, lead and iron salts. He found that given the way these metal salts attach themselves to polymer chains, it can lead to gels designed to mimic the spontaneous healing of wounds in animals. According to the professor, such a property would potentially allow such gels to be used in surgeries. He hopes that when these gels are applied to a wound, they would perform the task of suturing it.

Another finding by the professor has the capacity to transform industrial- scale production of materials. Currently, plastic material is melted in a pipe and pushed through a slit. The film thus generated is stretched and later cooled. The product is then used to create plastic products like carry bags, lamination papers, etcetera. However, plastic films undergo what is termed ‘necking behaviour’ when they are stretched. Here, the width of the plastic film reduces, sometimes by as much as half, thereby limiting industrial production. According to Professor Lele, long-chain-branched polymer gels which resist such ‘necking behaviour’ could be used instead of regular plastic material, thereby solving the problem.

Dr Satyajit Mayor, a Bangalore- based scientist and professor at the Cellular Organization and Signalling at the National Centre for Biological Sciences, was awarded the Infosys Prize for Life Sciences for his research in ‘regulated cell surface organization and membrane dynamics’. Dr Mayor’s work has helped scientists better understand how membrane molecules are trafficked within cells, and how the cell is able to control and remodel the processes that occur inside it. Also, the general understanding of the state of the cell—in healthy or diseased conditions.

“It all started in 1995 [the year I returned to India after completing my post-doctoral research in the US], when I had this question—how do specific proteins enter the cell?” he says. Cells sense their extracellular environment and continuously communicate information internally, via a wide range of membrane receptors, many of which are located in the outer membrane of the living cell. It has long been held that cell membranes exist in a ‘fluid’ bilayer, made up of hundreds of lipid and protein species. However this has raised the question— how can such a fluid environment be able to provide the means to control the local composition of lipids and proteins?

Over the years, Dr Mayor’s research has proved that this can occur because the membranes have a highly dynamic domain structure that suggests the presence of active, energy-dissipating processes. This has led to the classification of membrane components based on the nature of their participation in this complex dynamics. Dr Mayor’s work has important bearings. According to him, research in this field will help us understand how various diseases like cancer and HIV spread in an organism and whether their movement can be checked. “When cancer occurs, there is an uncontrollable growth in the population of cancer cells. Cells at this point lose the ability to communicate with their neighbours. How does this happen? Can it be stopped? We are looking for solutions to these questions,” he says. The professor’s current focus is on the spread of HIV in organisms. “There are receptors in cell membranes that act as sentinels. These receptors control what can enter the cell. It is this process that the virus interferes with. Currently, we are trying to learn if we can reverse such interferences,” he says.

(This article was modified after it was published)