From Newton to Einstein, understanding gravity has been the holy grail of physics. Professor T Padmanabhan of the Inter University Centre for Astronomy and Astrophysics, Pune, spoke to Open of the work for which he was awarded the 2009 Infosys Prize for the Physical Sciences. 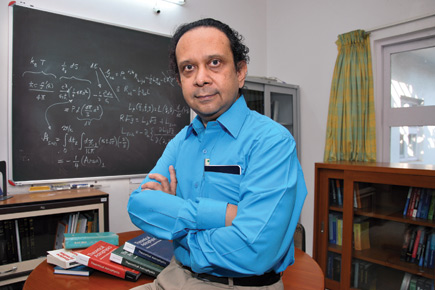 Professor T Padmanabhan on the work for which he was awarded the 2009 Infosys Prize for the Physical Sciences.


Q Gravity is the force we are most familiar with, yet it remains the most mysterious. What makes it so?

A We are familiar with two force fields in day-to-day life: electromagnetism and gravity. The first deals with charged bodies and unlike gravity it can be both attractive and repulsive; so it doesn’t increase just because you add more and more material, because matter on the whole is electrically neutral. Gravity, on the other hand, is always attractive, which means that its effect is accumulative. As a result, gravitational systems have a tendency to collapse as they get more and more massive, and there is an inherent instability to gravitational systems. Moreover, if you consider the implications of Einstein’s formula E=Mc2, energy and mass are interrelated, so even energy exerts gravity, and in turn the gravitational field of matter also exerts gravity. As a result, gravity is the only non-linear classical force and is very difficult to work with.

Q What is the basis for the idea that gravity is not a fundamental force?

A The idea of gravity as an emergent force is a very old one, none of us working in the field today can claim full credit for it; it goes back to Andrei Sakharov who first suggested that gravity, like elasticity, is a manifestation of more fundamental properties of space-time microstructure. A solid body can have elasticity, which is an emergent phenomenon involving a large number of atoms, even though it makes no sense to talk of elasticity for an atom.

But the specific model that Sakharov came up with turned out to be inadequate because in a sense it was very primitive—but it left many of us fascinated with the idea. Then, in 1995, Ted Jacobson came up with an idea that looked interesting. My approach to this problem was different. I wanted to show first, using known features of general relativity itself, that gravity can be emergent. I showed in 2002 that the Einsteinian gravity equations actually reduce to the first law of thermodynamics in special cases. It led me to study if this may be true in more general cases, and between 2002 and 2010, I have studied different facets of this idea. I could show that the equations describing any reasonable theory of gravity reduce to a thermodynamic identity, and could be obtained from an entropy maximisation principle. These results convinced me that thermodynamics is more basic than gravity. My ideas have won prizes from the Gravity Research Foundation, US, four times between 2002 and 2008, including the First Prize in 2008.

Q You have been working in the field for over a decade, yet the idea has attracted attention in the popular press only after a paper by Dutch string theorist Erik Verlinde. Why should this be so?

A For several years, there have been two competing approaches to gravity, string theory and loop quantum theory (LQG). I have close friends in both groups, and both these communities were quite aware of my work but did not know what they could do with it. I felt they should be taking this approach more seriously, which was happening but rather slowly. I personally prefer to take these ideas to the popular press after they are recognised by the peer group, and was planning to do it after the recent Infosys award, which cited this work. Verlinde’s paper appeared just at this time. It is good that a string theorist as well as a LQG person, Lee Smolin, are now taking interest in the thermodynamic approach. Anything that draws attention to these ideas is good!

Verlinde’s paper is in two logical parts. One part derives Einstein’s equations from thermodynamic arguments. This is not new, and I had done this a long time ago. In the second part, and this is the part he seems most excited by, he has derived Newton’s law of motion out of entropic considerations. Unfortunately, I do not agree with this part, and I think it involves faulty, circular reasoning. Nevertheless, it has generated popular interest in this work. Hopefully, it will spur more work in the area, but in the right direction.

Q Does not your approach preclude several string theoretic models of gravity, in particular any that depend on the existence of a fundamental particle such as the graviton?

A To a certain extent, yes, but not completely. In my approach, in which you think of gravity as analogous to elasticity of space-time, gravitons are analogous to phonons which are the quanta of sound waves that can propagate through an elastic solid. But phonons tell us nothing about the atomic substructure of matter! In the same way gravitons will have some intermediate role to play, but they are not going to provide us with a fundamental understanding of space-time structure. There are, however, other aspects of string theory which could be usefully merged with my approach, so I don’t see these two as completely contradictory. For example, my approach indicates a natural way of extending Einstein’s theory to higher dimensions purely from thermodynamic considerations, which is in resonance with string theory’s use of higher dimensions.

Q You combine your interest in science with pursuits that can loosely be termed ‘spiritual’. Are these not at odds? What do you make of the assault on religion by someone like Richard Dawkins?

A Dawkins has erected a straw man and knocked it down. I have no respect for this. It is very easy to knock down a particular class of models for God and religion. Russell and others, for example, have already done this a long time ago and far more effectively.

My take is that my concept of fundamental reality does not require any support from science or vice-versa. The two things lie in different domains and represent different types of knowledge. One is by its nature introverted, an inner knowledge, and the other is extroverted. Together, they complement each other.

Q Where does this other knowledge come from?

A The idea of direct experience lies beyond Aristotelian logic. It is born out of a personal knowledge—say, through a meditative experience. It is not translatable into the normal grammar of ideas, but nothing in ordinary logic precludes its existence.

Q Once you step beyond Aristotelian logic, what keeps you interested in physics? Does it not then become just a game?