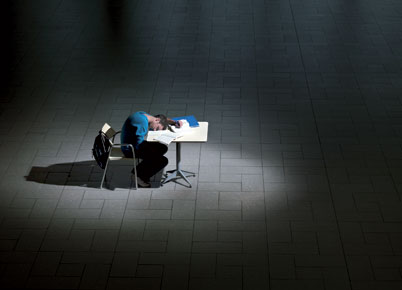 Various studies have shown how animals, including humans, whenever deprived of sleep, face difficulty in remembering specific instances. This occurs because memory consolidation, or the process of converting short term memories into long term memories, occurs while asleep.

But just how that process works has remained a mystery. Could it be that not two but a single process is at work here? That the mechanism which promotes sleep could also be consolidating our memory? One theory about the connection between memory consolidation and sleep has been that memory gets consolidated during sleep because this is when the brain is quiet and allows memory neurons to work.

Now, a new study, published in eLife, finds that it is not memory neurons that get to work because the mind is quiet while sleeping. In fact it is the other way round. Memory neurons actually put us to sleep.

For the study, researchers from Brandeis University in the US studied fruit flies. They discovered that whenever dorsal paired medial (DPM) neurons, well-known memory consolidators in flies, were activated, the flies slept more. When DPM neurons were deactivated, the flies kept buzzing. All these take place in a section of the brain called the mushroom body, similar to the hippocampus in humans where our memories are stored.

Not only did parts of the mushroom body in the fly’s brain help send it to sleep, at other times it also kept it awake. In a statement put out by Brandeis University, one of the researchers, Bethany Christmann says, ‘It’s almost as if that section of the mushroom body were saying ‘hey, stay awake and learn this… Then, after a while, the DPM neurons start signalling to suppress that section, as if to say ‘you’re going to need sleep if you want to remember this later.’’

She further adds, ‘Knowing that sleep and memory overlap in the fly brain can allow researchers to narrow their search in humans… Eventually, it could help us figure out how sleep or memory is affected when things go wrong, as in the case of insomnia or memory disorders.’