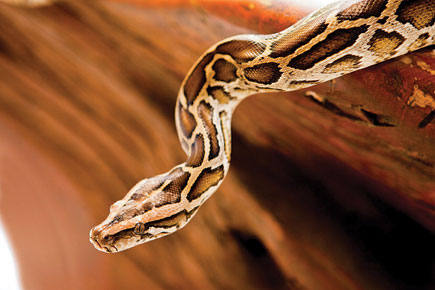 
The Burmese python, like most of its related species, often preys on large animals such as deer. A single such meal is enough to last it for several months, but such digestive effort requires physiological responses that are no less extreme, at least from the human point of view. Within a day of the meal, the python body weight can go up 40 per cent, metabolism rate increases fortyfold, the size of all major organs except the brain double in size.

A University of Colorado Boulder study, published in the journal Science, shows that at this time huge amounts of fatty acids circulating in the bloodstreams of feeding pythons promote healthy heart growth. Leslie Leinwand and her research team found that the amount of triglycerides—the main constituent of natural fats and oils—in the blood of Burmese pythons, one day after eating, increased more than fiftyfold. Despite the massive amount of fatty acids, which are seen as heart risk factors in humans, there was no evidence of fat deposition in the heart.

Once the chemical make-up of this blood plasma was identified, the researchers injected fasting pythons with a mixture they developed to mimic such plasma. The pythons showed increased heart growth and indicators of cardiac health. Mice injected with the mixture showed the same results.

“We found that a combination of fatty acids can induce beneficial heart growth in living organisms,” says postdoctoral researcher Cecilia Riquelme, first author of the Science paper. “Now we are trying to understand the molecular mechanisms behind the process in hope that the results might lead to new therapies to improve heart disease conditions in humans.”

“Well-conditioned athletes like Olympic swimmer Michael Phelps and cyclist Lance Armstrong have huge hearts,” says co-author Leslie Leinwand. “But there are many people who are unable to exercise because of existing heart disease, so it would be nice to develop some kind of treatment to promote the beneficial growth of heart cells.”