Trump and Hillary: The Unloveable versus the Despicable

Compared with Trump’s hideous and incurable flaws, Hillary’s perceived faults seem far from indigestible to a voter with a sturdy stomach 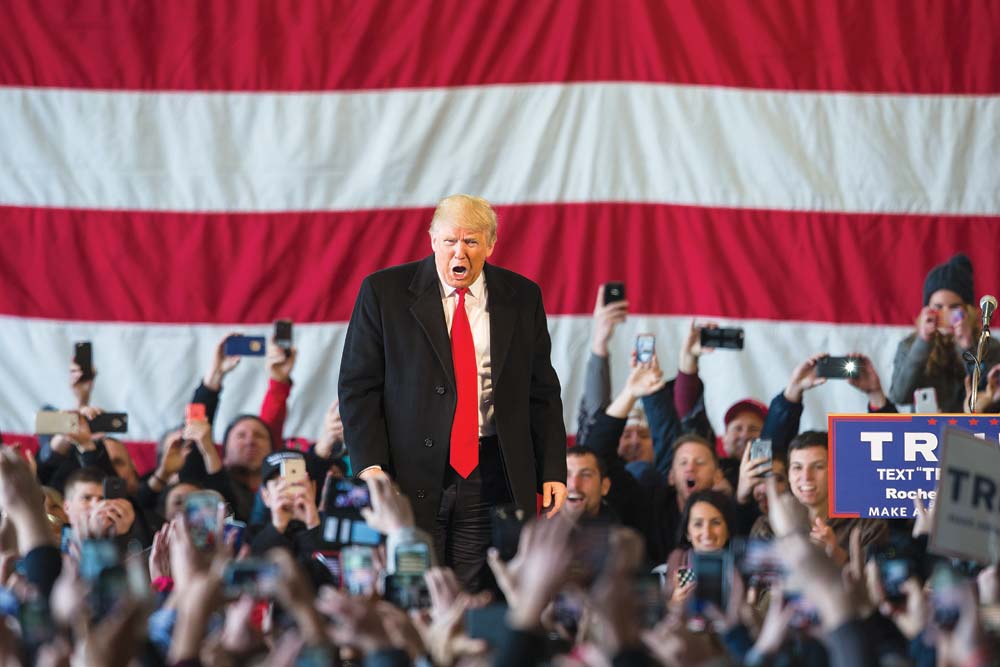 BARRING A SURPRISE of epic dimensions, the United States of America will see Hillary Clinton take on Donald Trump in the election for its 45th president. Having wracked my memory, I can think of no American presidential candidate who has inspired such broad, cross-party distaste as Hillary does.

The election will pit The Unloveable against The Despicable.

It has been the custom in America in the last four presidential election cycles for Republicans and Democrats to despise each other’s candidates, but never their own. Remember the hatred for George W Bush among Democrats, which bordered on the unhinged; or the kooky reviling of Barack Obama by many Republicans?

Even in his second run, however, Republicans stood by a wounded Dubya. Their adulation may have dimmed somewhat when he ran for re-election, but Democrats have never viewed Obama with antipathy. The 2016 election is different: the two presumptive candidates are disparaged by large numbers of voters on their own side. There are legions of young Democrats who can’t stand Hillary, and of Republicans for whom Trump is the end of civilisation.

This is unprecedented. But it is not catastrophic. If Trump is handed the thrashing he deserves, the election may, in fact, bring national catharsis.

This election has forced attention on some unlovely values on the populist American right, where a lazy disparagement of immigrants and a hysterical view of the porousness of American borders have become the political norm. These threats to American cosmopolitanism are accompanied by a sharpening of the worst sort of social conservatism—including a retrograde assault on women’s reproductive rights—and a clamour for America to turn its back on the world, along with screeching calls to curb free trade. There is a strong (but spurious) nostalgia for a Better Age when America ruled the world, Americans had a God-given right to the good life, and ethnic minorities knew their place. Trump—by his fantastical rhetoric that panders to nativist angst—is nourishing this myth, and promising to bring it to life.

LET US GIVE this election a special place in history. If Trump were to win, America would become the first major Western democracy since World War II to elect to its topmost office a candidate who campaigned in an unabashedly racist way, using language on the stump that would be a firing offence at the workplace. Can you imagine a police chief, or a college dean, or a CEO publicly describing all Mexicans as “rapists” and keeping his job? And yet Trump barrels on unchecked, in his quest for the White House.

If Trump were to win, America would become the first major Western democracy since World War II to elect to its topmost office a candidate who campaigned in an unabashedly racist way

Let’s be blunt: by his pronouncements, Trump has shown himself to be unfit to lead America. The Republican Party establishment lost valuable credibility after Paul Ryan, the speaker of the House of Representatives, endorsed Trump—despite having condemned him unequivocally on several previous occasions. It may have been a lukewarm endorsement, but there was no escaping the odour of hypocrisy and moral decay. Ryan diminished himself. The smartest man in a once-great party stooped before a boor.

This endorsement will haunt the Republicans. Already, it has put Ryan and others in an excruciating spot. Days after the Speaker abandoned his resistance to Trump, the latter insisted that a judge who is presiding over a lawsuit relating to his Trump University be disqualified because of his ethnicity. Judge Gonzalo Curiel, Trump said, had an “absolute conflict” in presiding over a case concerning Trump due to his “Mexican heritage”; “It’s an inherent conflict of interest”; “He’s a Mexican. I’m building a wall between here and Mexico.”

Later on a news show, America was treated to this additional exchange (linked to Trump’s call for a ban on Muslims entering America).

News-anchor: “If it were a Muslim judge, would you also feel like they wouldn’t be able to treat you fairly because of that policy of yours?”

Trump: “It’s possible, yes. Yeah, that would be possible, absolutely.”

All this was almost perfectly designed to make Ryan squirm, and the Speaker duly performed a flat-footed dance of discomfort. “It’s reasoning I don’t relate to. I completely disagree with the thinking behind that. And so, he clearly says and does things I don’t agree with, and I’ve had to speak up on [sic] time to time when that has occurred, and I’ll continue to do that if it’s necessary. I hope it’s not.”

For Hillary to doubly safeguard a victory that demographic indicators suggest is hers, she would need to prise voters away from the Republicans—voters who are naturally inclined to vote Republican but who cannot bring themselves to back their party’s candidate this year

I suspect Ryan will be disappointed: Trump is a recidivist. Ryan, like many sucker-punched Republicans, is resting hopes on Candidate Trump becoming more ‘presidential’ in the weeks and months ahead. But the ethnic calumny against Judge Curiel came after Trump had secured the status of presumptive Republican nominee. These weren’t words uttered in the heat of a primary battle. The words reflected the man’s innermost beliefs. Even Newt Gingrich—widely spoken of as Trump’s possible running- mate, and who has said that he’d be “hard- pressed not to say ‘yes’” if asked to be Trump’s VP—was disconcerted enough to scold the candidate. “I don’t know what Trump’s reasoning was, and I don’t care. His description of the judge in terms of his parentage is completely unacceptable.”

Trump responded by describing Gingrich’s criticism as “inappropriate”. I reckon that puts to rest the notion of a Vice-President Gingrich—for the sake of Gingrich’s self-respect, if for nothing else. And while on the subject of self-respect, how bracing it would be if all mainstream Republican politicians would decline, if asked, to be Trump’s running-mate.

THE LEVEL OF agony among Republicans—or conservatives— can be gauged by a remarkable piece in the National Review magazine by Charles Murray, a leading American conservative intellectual. ‘In my view,’ Murray wrote, ‘Donald Trump is unfit to be president in ways that apply to no other candidate of the two major political parties throughout American history.’

Murray—who is reviled in the more hysterical liberal circles for his blunt (and frequently misrepresented) views on education— is among the last people you’d expect to come out for Hillary. But he ends his essay with these vivid words: ‘We have never had a president whose character proved to be more admirable once he was in office than it had appeared during the campaign. What you see on your television screen every day from Donald Trump the candidate is the best that you can expect from Donald Trump the president. ‘Hillary is even worse’ doesn’t cut it.’

The Republican Party establishment lost valuable credibility after Paul Ryan, speaker of the House of Representatives, endorsed Trump —despite having condemned him unequivocally on several previous occasions. The smartest man in a once-great party stooped before a boor

Murray’s last line refers to an argument made frequently by Hold-Your-Nose conservatives in regard to Donald Trump: Hold your nose and vote for him because Hillary Clinton is even worse. Murray’s essay has given many on the American right the intellectual cover they need to vote for Hillary, a politician for whom conservatives have no love whatsoever.

Yet compared with Trump’s hideous and incurable flaws, Hillary’s perceived faults—transparent insincerity, over ambition, ruthlessness, excessive focus- grouping, an absence of warmth, a record of political dishonesty—seem far from indigestible to a voter with a sturdy stomach. In any case, these are not faults that are confined to Hillary among American politicians. As for her e-mail server scandal, it continues to be too esoteric for the average voter to grasp.

For Hillary to doubly safeguard a victory that demographic indicators suggest is hers, she would need to prise voters away from the Republicans—voters who are naturally inclined to vote Republican but who cannot bring themselves to back their party’s candidate this year. They will either sit out the election, or hold their nose and vote for Hillary. This requires Hillary to assume a position as close to the political centre as possible once she has seen off the Quixotic leftist threat of Bernie Sanders, who is, to the consternation of many Democrats, fighting to the bitter end for his party’s presidential nomination.

It should be said that Candidate Hillary needs to avoid picking a running-mate like Elizabeth Warren, a darling of the progressive left who is the senior senator from Massachusetts. Warren would be an unwise choice if Hillary wants to ensure that hers is a respectable ticket for moderate and renegade Republicans. Picking Warren could tip back into the Trump camp several Republicans who are currently unable to stomach the Donald. These voters would find it harder to refrain from blocking what would be widely portrayed as a ‘scary-left’ Clinton-Warren ticket.

THE NUMBERS SMILE on Hillary. Let’s not forget that 93 per cent of Republicans voted for Mitt Romney in the last election, and he couldn’t defeat Obama.

As David Brady, a political scientist at Stanford University’s Hoover Institution, has written, ‘Even if Romney had won every Republican or conservative voter, it still wouldn’t have been enough.’ There is every indication that far fewer Republicans will vote for Trump than voted for Romney. As Brady points out, given that there are 5 per cent more Democratic voters than there are Republicans, ‘the GOP needs a solid majority of independents to win the national election.’ Independents comprise 29 per cent of the electorate, but recent YouGov polls suggest that 43 per cent of these voters hold a ‘very unfavourable’ view of Trump. These are votes he will never get.

So by shaving off a not insignificant percentage of GOP voters and securing a decent chunk of the independents, Hillary’s election is assured—so long as there is no large-scale abstention by young Democratic voters who are currently rooting for Bernie. After the Democratic Convention in Philadelphia in late July, all minds will be fixed on the main battle. With a foe as toxic as Donald Trump, it is hard to imagine that even a prize egotist like Bernie Sanders would jeopardise a Democratic victory by telling his hordes to stay at home on voting day. He will make his peace with Hillary—through gritted dentures.

However unloveable Hillary Clinton may be, she is, as the irrepressible and very non-Clintonian PJ O’Rourke has written, ‘at least within normal parameters’. Donald Trump, on the other hand, is beyond the pale. His are the parameters of a global nightmare.