The Rewards of Being a Spectacle 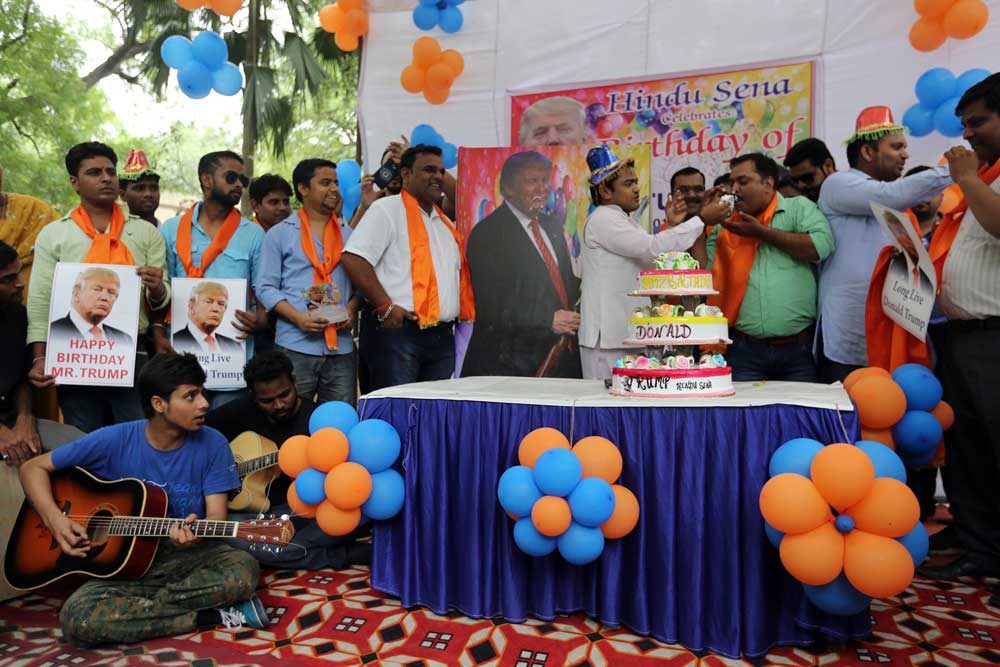 THE ASPIRING politician who does not have either charisma or intelligence or connected kin finds himself in the peculiar position of having to climb a difficult mountain relying entirely on the worst and most comic traits of his character. It is his good fortune that often that is enough. That is how India woke up to the bizarre ritual of a painted Donald Trump having his mouth smeared with a birthday cake by a party known as the Hindu Sena.

What remained of the portrait was more a defacement than a celebration, but in any case, Trump, all those thousands of kilometres away, wouldn’t really mind. Chances are he might even be pleased. Because that is just the kind of man he has shown himself to be and those like the soldiers of the Hindu Sena are but microscopic versions of him. Hollow men who understand just one trick—that publicity, no matter how vicious or amusing a form, can create its own momentum, until after a critical threshold you stop being a fool.

When Trump began his campaign for the presidential nomination of the Republican party, he claimed to have billions of dollars which he would use to finance himself, thus not having to rely on donors. As it turns out, at the end of the season, what he spent was far less than those he defeated. He managed this with free publicity by making outrageously racist, sexist and communal remarks catering to the most bigoted voters in that country. And yet, reams and reams of free space in the biggest newspapers there became his for the taking. This is not the first time that the Hindu Sena and its leader Vishnu Gupta held an event that roped in Trump’s name, but it has always been enough to get television cameras surrounding them and mentions in every leading newspaper.

Public displays that normal human beings would find embarrassing are a great tool in the politician’s arsenal. What hope did Trump have of the Republican nomination if he didn’t portray himself as different? What hope does the Hindu Sena have of being taken seriously unless it does something shocking? The outfit has its genesis in the Shiv Sena, a party that for decades made a living out of shock. If it is not threatening, then these antics become funny. But if the purpose is to elicit a response, then those who laugh at the Hindu Sena probably don’t realise how they have been co-opted by a farce.

We can see variations of this strategy in numerous fields. There is prime time television in which Times Now made itself the leader precisely by making an exhibit of itself with its posturing and stridency. Bollywood stars and starlets do it all the time when their movies are set to release, and a show called Bigg Boss gets its TRPs out of deviant behaviour. This is not easy to do, but sometimes it has its rewards. Who accuses the Aam Aadmi Party of being a ‘media creation’ now?