Temple of the Aids Goddess

A unique prevention tactic in a remote Mysore village 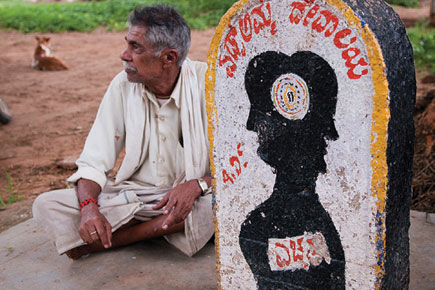 A unique prevention tactic in a remote Mysore village


Simple as it may sound, on World Aids Day, 1 December 1997, a school teacher put a stone on the ground and painted it. Lo, a temple was born. The nondescript village of Menasi Kyathanahalli in Mysore district has the distinction of having a shrine to an Aids goddess known as Aidsamma.

The temple is now a stone pillar resembling a highway milestone on which is painted the words—in both English and Kannada—‘Aidsamma temple’. Below it is a silhouette of a woman and a man back-to-back, denoting that the disease comes from unprotected sex. ‘Yaccharike’ (be warned), it says above the word HIV.

After coming to the village as a high school teacher, HN Girish was told of how an eatery owner who died of Aids was buried using sticks to push his body down because no one was willing to touch it. The dead man’s wife, too, had contracted the disease and was put in isolation till she died. “The incident disturbed me and I thought of a way to educate locals. Along with my students, I built this ‘temple’ on government land next to the school,’’ he says.

Girish teaches at a college in Mysore now and the temple’s upkeep is the responsibility of one of his students, Ravi MS. “The message is that prevention is better as there is no cure,’’ says Ravi, who agrees that the shrine definitely needs a fresh coat of paint. “There was a thatched roof earlier, but it came down due to rains. We want to put up a permanent structure,’’ says a villager.

After the village became known for housing such a temple, HIV patients came to pray here, thinking they would get cured. It led to some villagers vandalising the structure. “They felt it would be difficult to marry off their daughters,’’ says Hanumanthe Gowda, an elder.

After the temple came up, villagers deal with HIV patients with more understanding. “We are grateful to Girish sir to have thrown light on it. The boys and girls here are very aware of Aids and other sexual diseases and think twice before getting into relationships. Other villagers too are scared to get into any liaisons. Even if they do, they take all precautions so that they do not contract the disease,’’ says Siddarame Gowda, a villager in his fifties.

Girish and his students have also counselled many, including an HIV patient who came all the way from Tamil Nadu hoping that praying here would cure him. “Girish sir did the government’s work by spreading awareness. The only job the government has done is put up a board that says it’s 3 km to the Aidsamma temple,’’ says a villager.