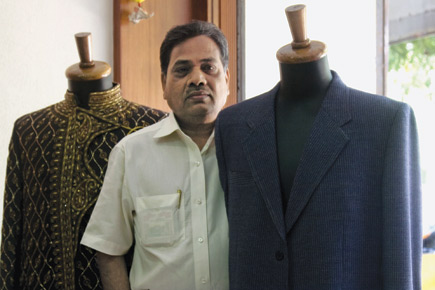 
Shiv Sena chief Bal Thackeray rarely takes advice. But when his dress designer Madhav Agasti makes a suggestion he sits back and listens. Agasti, who has been designing Thackeray’s wardrobe for a couple of decades is responsible for the transition from black sherwanis to white pyjama-kurta to the current colourful silk lungi-kurta.

“Saheb loves to dress up. He likes clothes with a matte finish. When he addresses public meetings he does not like clothes that shine,” says Agasti. Like his personality, Thackeray is a colourful dresser and prefers soft thick material which does not crush. He is partial to Chinese collars and concealed buttons for his kurtas.

Union Minister for Heavy Industries Vilasrao Deshmukh has also been a loyal patron of Agasti. “He looks best in Jodhpuri bandgala and two-piece suits. He is one of the few politicians who can carry off khadi with elegance. He used to choose his own designs before he became the Chief Minister. Now his son Amit chooses his styles,” says Agasti. Deshmukh’s signature style is the Aligarhi pyjama-kurta in fine khadi with a half-sleeve single-pocket jacket.

When Shiv Sena leader Manohar Joshi was elected Speaker of the Lok Sabha, one of the first calls he made was to Agasti asking him to keep ready a set of clothes for his swearing-in the next day. “We worked through the night and the next day I delivered his clothes via flight.” Agasti deleted a couple of styles from the Joshi folder and added new ones. “He lets me have a free hand with fabrics and styles. It is a pleasure to design his clothes.”

Born and brought up in Nagpur, 59-year old Agasti was fascinated with clothes, style and cuts since an early age. He would watch local tailors and try to replicate the cuts on paper. After school, he worked as an apprentice at a local shop and learnt the tricks of the trade. As his skills enhanced, his ambition grew. “I wanted to design clothes for Hindi film stars,” says Agasti.

In 1974, with a few hundred rupees in his pocket, Agasti boarded a train to Mumbai. He worked as an assistant to designers who did work for Bollywood. After a while, he set up a small shop in Bandra.  To date, he has designed costumes for about 300 films. “Mogambo’s costume in Mr India and recently Nana Patekar’s clothes in Welcome are designed by me,” boasts Agasti.

His  networking skills put him in touch with local politicians. His profile took a leap when close buddies Vilasrao Deshmukh and Sushilkumar Shinde (now Union minister for power) walked into his shop. “This was in the early 80s. Both are extremely stylish and let me develop their individual styles. Deshmukh Saheb introduced Gopinath Munde and others. Today, I have clients from all political parties.”