A film song show on TV that includes subtitles is boosting reading skills among children and adults. 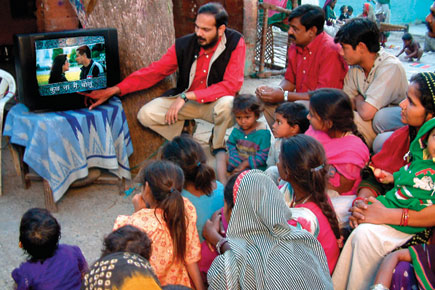 A film song show on TV that includes subtitles is boosting reading skills among children and adults.


It’s a Sunday evening in Khodi village in Gujarat, and Kishorebhai Sodha, a farmer, is encouraging his 14-year-old son, Rajesh, to watch a film song show on television called Chitrageet. For Kishorebhai, Chitrageet is crucial to Rajesh’s academic success. It changed his performance at school (Rajesh used to be the quintessential class slacker) in just three years.

Chitrageet is different from other such shows in one critical aspect—the song videos are accompanied by a moving strip of lyrics at the bottom of the screen. When Rajesh, a 9th standard student, noticed the captions for the first time, he tried to sing along with the songs. Sometimes, when the lyrics moved too quickly, he copied them down and went back to them after the show. Soon, he was reading his textbooks with fluency.

Doordarshan began airing same-language subtitles (SLS) on its film song show nine years ago. It reaches 200 million viewers in ten states, and its impact on reading skills has been huge. Research shows that functional literacy amongst children after five years of SLS exposure more than doubled. There was also a four-fold increase in the rate at which illiterate adults became proficient readers.

SLS’s creator is a bearded IIM-Ahmedabad professor called Brij Kothari. The idea came to him when he was a PhD student at Cornell University some 14 years ago.

Kothari, who had to learn Spanish for a research project, was watching a Spanish film subtitled in English. He found that the English subtitles were only distracting him. “It occurred to me that if the subtitles were in Spanish, I’d learn the language a lot quicker. The next thought was that if all Hindi films were subtitled in Hindi, India would become literate more easily,” he says. The success of SLS, and its incredibly low cost—one cent per person per year—is now drawing the attention of educators internationally. In Khodi, researcher Hema Jadvani says SLS has reduced the dropout rate at the local school and even created greater freedom for women. “Women are travelling on their own because they can finally read the bus schedule,” she says.

For Kothari, though, the battle is not over. He is still campaigning for Prasar Bharati to include subtitling on every film song show. Only then will SLS’s true potential be realised.