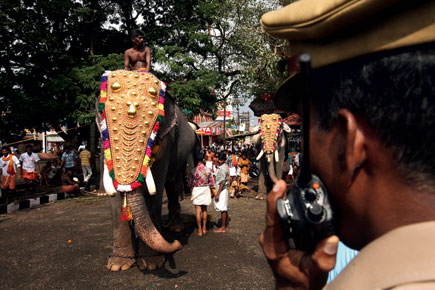 
When endowed with success, the rich and famous gift precious stones and elephants as thanksgiving to the divine. So it is not surprising to hear that Mukesh Ambani’ son, Anant, has decided to gift a light-skinned or Airavath (sacred white elephant) to the Lord Balaji temple in Tirupati.

Temple elephants abound in south India and the practice of donating them makes for an illustrious list. As per records maintained by Tirumala Tirupati Devasthanams, in 1991, when J Jayalalitha (that was the spelling of her name then) became Tamil Nadu Chief Minister for the first time, she donated an elephant to Lord Balaji. In 1996, it was HD Deve Gowda’s turn to gift a huge elephant after being sworn in as Prime Minister. The Karnataka government, too, donated one in 1999.

“The gifting [of elephants] has become a symbol of status and power. Astrologers are also to blame as many tell their clients that gifting an elephant will bring them better luck,’’ says Sharat Babu, a honorary wildlife warden in Bangalore. He points to several laws banning such practices and calls it cruel and inhuman.  “All temple elephants suffer from arthritis as they stand on concrete or walk on bitumen roads for long hours. The mahouts also pluck hair from their tails—they are in great demand to be set in ornamental rings—that leads to these beasts going berserk. In Kerala, the forest department has compiled a list of 1,100 captive elephants, mostly at temples, that are suffering from arthritis and zoosis, a constant nodding of its head,” says Babu.

Former Karnataka Chief Minister BS Yeddyurappa wanted to gift three elephants to a temple each in Kerala, Tamil Nadu and Karnataka. To circumvent the law, he bought an elephant from Assam and gifted it to a Kerala temple. His other two attempts were thwarted by alert vigilantes.

Ambani junior, meanwhile, visited the TTD shrine’s goshala twice last week, enquiring about the condition and maintenance of the elephants. On his second visit, he offered to donate a rare Airavath mostly found in Thailand. The chief priest agreed, since the six temple elephants were overworked. They needed three more to share the workload. The elephants are used at least six times a day for rituals, and are also sent to other temples.