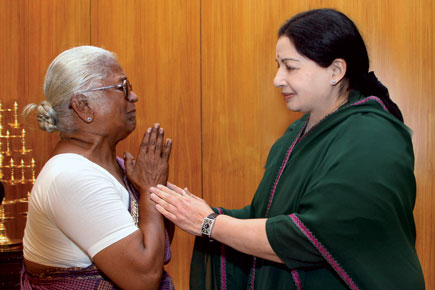 ‘Justice, yes. Sheer political brilliance, yes. Now let’s start the music,’ Tamil activist and poet Meena Kandasamy updated Facebook immediately after the Tamil Nadu government’s decision to release all seven convicts in the Rajiv Gandhi assassination case (a decision stayed by the Supreme Court two days later). This update epitomises Tamil sentiment on Tamil nationalism, an abiding passion for which has been a decisive factor throughout general elections in the state. Even hardcore DMK supporters tweeted and facebooked in favour of their political opponent, the AIADMK supremo and state Chief Minister J Jayalalithaa, praising her for the decision to release the convicts.

An emergency state cabinet meeting on 18 February took that decision to set all seven convicts free. These include the three on death row—Santhan, Murugan and Perarivalan. The other four are convicts who were sentenced to life in jail— Robert Pious, Jayakumar, Ravichandran and Nalini, the last of whose death sentence was commuted in 2000. The apex court, in the verdict that commuted death for Santhan, Murugan and Perarivalan, alias Arivu, had suggested that the government may use its power to remit sentences under CrPC 432 and set them free. Jayalalithaa did not take even 24 hours to make the most of what the court had suggested. Her government promptly sent its recommendation to the Centre. “If there is no reply from the Centre within three days, the government would use the power vested [in] it,” Jayalalithaa declared in the Assembly on 19 February.

DMK chief Karunanidhi has also expressed hope that the Centre will respond positively to the state cabinet recommendation. MDMK general secretary Vaiko, PMK leader S Ramdoss and CPI state secretary D Pandian had also demanded the assassins’ release hours before the cabinet decision. The Congress seems the only party in Tamil Nadu that is unhappy about the decision.

Of late, the AIADMK has been consistent on supporting the cause of Tamil Eelam at every crucial moment. Its 2011 resolution in the Assembly demanding their death sentences be commuted, and its 2013 resolution demanding economic sanctions on Sri Lanka are among Jayalalithaa’s strongest moves in this direction. In 2009, she came down heavily on the Sri Lankan government for the genocide of Sri Lankan Tamils, and went so far as to term Sri Lankan President Mahinda Rajapaksa as a ‘war criminal’. This is quite different from the AIADMK’s last term in government, from 2001 to 2006, when she showed little interest in the case of either the assassins of Rajiv Gandhi or the cause of Tamil Eelam. It was the Tamil genocide in Sri Lanka that tipped the AIADMK to switch sides.

The DMK, on the other hand, lost face in Tamil Nadu for being a UPA ally at the time of that civil war. This might have played a big part in its Assembly election loss in 2011. Indeed, it was ironical that the DMK, a party born of Dravidian politics, has not been as sharp as the AIADMK in tapping this Tamil undercurrent of intense identity politics.

The LTTE may be well known as a terrorist organisation, but to be an LTTE supporter is a natural state of political being for many Tamilians. This explains the mass support in favour of the convicts in the Rajiv Gandhi assassination case being released. This was also the reason for the ‘inordinate delay’ taken over their mercy petitions; no Government at the Centre wanted to invite the wrath of the powerful regional parties in Tamil Nadu by hanging the assassins.

Political commentators expect the AIADMK to be rewarded richly for this decision in the upcoming Lok Sabha polls, predicted to be a reversal of the 2009 results where the DMK won 27 of 39 seats.

The convicts have been in prison for 22 years. The world is not what it was when they were jailed in 1992. The LTTE is no more; the war in Sri Lanka is over. A burning issue in Tamil Nadu politics—a vote mobiliser in every general election— has become history. But what human rights activists hailed as a triumph of clemency over retribution has been stayed by the Judiciary.